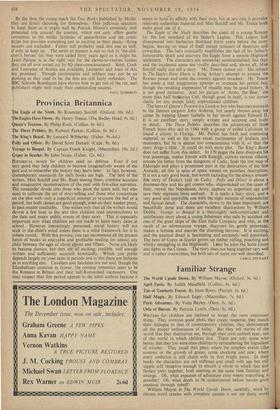 HISTORICAL novels for children need no defence. Even if not very good they help children to become imaginatively aware of the past and to remember the history they learn later. In fact, however, contemporary standards for such, books are high. The' best of the writers, Miss Sutcliff and Mr. Rush among them, combine accurate and imaginative reconstruction of the past with first-class narrative. The remainder divide into those who paint the scene well, but who need to cultivate the art of story-telling and those who concentrate on the plot with only a superficial attempt to re-create the feel of a period, but both classes are good enough, even on their weaker point, to pass muster creditably. One wishes only that all the writers would devote a few lines in the text (few children read introductions) to the date and major public events of their story. This is especially important now when children are not made to learn many dates at school. However interestingly presented, social history will not stick in the child's mind unless there is a solid framework for it to cohere round. With this proviso,,one can recommend all the present batch of books as enjoyable and profitable reading for almost any child between the ages of about eleven and fifteen. None are likely to become classics, but they are all exciting, credible, well enough written and sufficiently accurate historically. Which you prefer depends largely on your taste in periods and in this there are fashions as in anything else. Cavaliers and Jacobites are out and, though the Elizabethans continue in favour, the coming romantics seem to be the Romans in Britain and their half-Romanised successors. One may suspect that this period appeals•to the adult authors because it seems to have an affinity with their own, but at any rate it provides relatively unfamiliar material and Miss Sutcliff and Mr. Treece both make good use of it. The Eagle of the Ninth describes the quest of a young Roman for the lost standard of his father's Legion. This Legion had disappeared into barbarian Scotland thirty years before the story begins, leaving no trace of itself except rumours of desertion and cowardice. The hero eventually establishes the fact of, his father's honourable death and recovers the Eagle from a remote Highland settlement. The characters are somewhat sentimentalised, but they and the incidental scene are vividly described and, above all, Miss Sutcliff really can tell a story. Mr. Treece cannot yet. His subject in The Eagles Have Flown is King Arthur's attempt to assume the Roman power and unite the country against invaders. Mr. Treece has made a real imaginative attempt to re-create his period hut, though the resulting impression'of muddle may be good history, it is not, good narrative. And his picture of 'Artos, the Bear,' the more than half banharian Celt, though good in itself, is too icono- clastic for any except fairly sophisticated children.

The hero of Queen's Treason is a London boy who becomes assistant to the famous surgeon John Arderne, but nearly throws away his career by helping Queen Isabella in her revolt against Edward It. It is an excellent story, simply written. and accurate and lively in detail. The Three Pebbles describes the adventures of three French boys who sail in 1564 with a group of exiled Calvinists to found a colony in Florida. Mr. Parker has fresh and interesting material, as well as the more usual excitements of Indians and mutineers, but he is almost too conscientious' with it, so that the story drags a little. It could do with more plot. The Ring's Beard does not suffer from this defect. In 179 pages the hero discovers his true parentage, makes friends with Raleigh, outwits various villains, rescues his father from the dungeons of Cadiz, finds the lost map of Eldorado and plays a prominent part in the destruction of the first Armada: all this in spite of space wasted on pointless description. It is not a very good book, but worth including for the always irresist- ible story of Drake's raid on Cadiz. Polly and Oliver is about a drummer-boy and his girl cousin who, shipwrecked on the coast of Italy, outwit the Napoleonic Army, capture an important spy and save their regiment from ambush. It is really a fairy story, and a very good and enjoyable one with the right mixture of impossibility and factual detail. The characters, down to the least important, are beautifully done and there are excellent illustrations by William Dobbs. Voyage to Bengal is a thoroughly well-constructed and satisfactory story about a young fisherman who sails by accident on one of the great ships of the East India Company and who, as the result of an adventurous voyage, discovers his gentle parentage, makes a fortune and marries the charming heroine. It is exciting, and the nautical detail is fascinating and extremely well presented. The hero Of Gypsy in Scarlet grows up timber rolling, poaching and whisky smuggling in the Highlands. Liter he joins the Scots Greys and fights in the Crimea. The story does not hang together very well and is rather overwritten, but both sets of scene are well described.