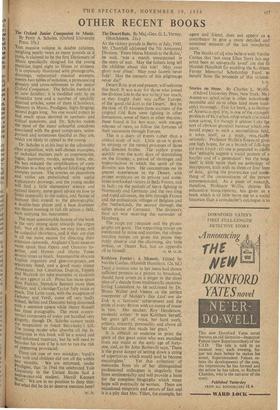 Churchill addressed the 7th Armoured Division. 'From Mersa Matruh to the Baltic,' he said, 'was a march unsurpassed in the story of war. May the fathers long tell the ,children about this tale! May your glory ever shine! May your laurels never fade! May the memory of this pilgrimage never die!'

Desert Rats; past and present, will welcome this book. It was easy for those who joined the division late in the war to heff too much, as they fought their way act-Ns Europe, • of the ' good old days in the Desert.' But by the time of El Alamein three-quarters of the original Old Rats were lighting in other formations, some of them in other theatres; these found it far less easy, with meagre releases of news, to follow the fortunes of their successors through Europe.

This is a diary of events rather than a critical study of war. Little space is given to strategy or the mental processes of those who directed battles. The author p asses quickly over the early days of skirmishing on the frontier, a period of shortages and improvisation in which the spirit of the division was born. He concentrates on its greater experiences in the Desert, with proper emphasis on its private and some- times overlooked victory at Beda Fomm, and in Italy; on the periods of tierce fighting in Normandy and Germany and the Iwo long and rapid advances, the first through France and the enthusiastic villages of Belgium and the Netherlands, the second through the sullen plains of Germany. The division's– final act was receiving the surrender of Hamburg.

The maps are vdequate and the photo- graphs are good. The supporting troops are mentioned by name and number, the admin- istrative troops are given the praise they richly deserve and the charming, shy little Jerboa, or Desert Rat, has an appendix all to himself. G. M. 0. D.