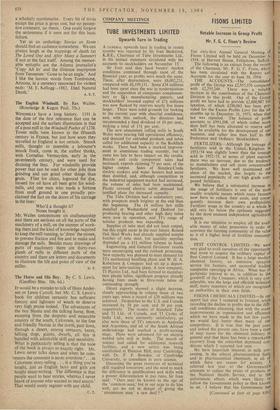 WINDMILLS have a long history. 1191 is the date of the first reference that can be accepted and the earliest illustration is that ofd post mill in the Windmill Psalter of 1270. Tower mills were known in the fifteenth century in France, but just how soon they travelled to England is not certain. Smock mills, thought to resemble a labourer's smock frock, came in, the author thinks, with Cornelius Vermuyden, early in the seventeenth century, and were used for draining the fens. For windmills provide power that can be used for other jobs than grinding and can grind other things than grain. Flint for china, logwood for dye, linseed for oil have all been grist for wind- mills, and one man who made a fortune from snuff ground in one proudly pro- claimed the fact on the doors of his carriage in the lines :

Who'd a thought it?

Mr. Wailes concentrates on craftsmanship and there are sections on all the parts of the machinery of a mill, on the manner of work- ing them and the kind of knowledge required to keep the mill running, to 'dress' the stones, to prevent friction and fire and to make and manage the sails. Besides many drawings of parts of machinery there are thirty-two plate% of mills in different parts of the country and there are letters and documents to illustrate the life and point of view of the