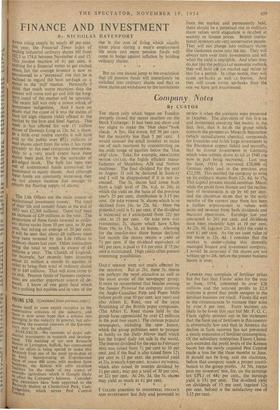 THE sharp rally which began on Tuesday abruptly closed the recent reaction on the Steck Exchange. it had been too short and too slight to make the 'blue chips'"gook cheap. A few, like FORDS, fell 10 per cent. but the majority less than 5 per cent. I would counsel the small investor to make use of such reactions by concentrating on the wide range of equities below the ' blue chip' class. Take, for example, ASSOCIATED MOTOR CYCLES, the highly efficient manu- facturers of Matchless, AJS and Norton machines. The final dividend for the year to August 31 will be declared in Januv ry and I will be disappointed if it is not in- creased. The 5s. shares had come back from a high level of 28s. 41d. to 24s.. at which the yield on the basis of the previous year's 25 per cent. distribution is 5.15 per cent. Or take PYRENE 5s. shares which have declined from 24s. to 22s. 9d. Here the potential yield is 51 per cent. if the dividend is increased' as 1 anticipated from 221 per cent. to 25 per cent. Or take NEW DAY FURNISHING 2s. shares which have fallen from 19s. to 17s. 3d. ex bonus. Allowing for the one-for-two share bonus declared last month the shares return a yield of 71 per cent. if the dividend equivalent of 641 per cent. is paid or 8.6 per cent. if 75 per cent is maintained. High yields often present interesting possibilities.

DAILY MIRROR were not much affected by the reaction. But at 21s. these 5s. shares are perhaps the most attractive as well as the most exotic of the newspaper group. It must be remembered that besides owning the Sunday Pictorial the company controls the Anglo-Canadian Pulp and Paper Mills (whose profit rose 50 per cent. last year) and also Albert E. Reed, one of the most • flourishing of the British paper companies. (The Albert E. Reed shares held by the group haute appreciated by over £3 millions in the past two years.) The curious popular newspapers, including the new Junior, which the group publishes seem to prosper as lustily as the Daily Mirror itself which has the largest daily net sale in the world. The interim dividend for the year to February next was raised from 71 percent to 10 per cent. and if the final is also raised from 121 per cent to 15 per cent. the potential yield at 21S. is nearly 6 per cent. SUNDAY PICTORIAL which also raised its interim dividend by 21 per cent., may pay a total of 30 per cent. or 321 per cent. At 24s. 3d. the 5s. shafts may yield as much as 62 per cent. review it when the ,accounts were presented in October. The attractien of this fira and investment company lies mainly in the fact, first, that it he ds the group which. controls the prosperous Minerals Separation (which manufactures chemical compounds, for foundries and holds large investments in the Rhodesian copper fields) and secondly,

that its were investments in Germany which were written down to nil in 1940 are now in part being recovered. Last year (to June, 1954) it recovered £28,000 of German debts and in the previous year, £22,550. This enabled the company to write up its, ordinary shares from 12s. 6d. to I5s„ This capital process should continue. Mean7 while the profit from finance and the realisar tion of investments is up by 60 per cent. and the chairman states that in the early months of the current year there has been a further improvement in values with increased revenue from both dividends and financial operations. Earnings last year amounted to 261 per cent. and dividends have been modestly' kept at 10 per cent. At 23s. 9d. (against 22s. in July) the yield is over 6I per cent. As the net asset value of the share is 32s. 4d. 1 consider that the market is under-valuing this shrewdly managed finance and investment company. I would be surprised if the shares are not written up to 20s. before the present business boom is over.

FARMERS may complain of fertiliser prices but the fact that Fisons' sales for the year to June, 1954, amounted to .over £28 millions and the untaxed profits to £2.9 millions is proof that profit margins in the fertiliser business are small. Fisons did well in the circumstances to increase their sales by over 6 per cent. Farm incomes are likely to be lower this year but Mr. F. G. C. Fison rightly pointed out in his statement that the farm use of fertilisers in this country is abnormally low and that in America the decline in farm incomes has not prevented a steady expansion of fertiliser consumption.. Of the subsidiary enterprises Fisons Chemi- cals exceeded the profit levels of the Korean boom but the newly acquired Pest Control made a loss for the three months to June. It should not be long, said the chairman, before that company made a proper contri- bution to the group profits. At 58s, FISONS pass my investors', test, for, on the earnings (ex EPL) of 441 per cent., the earnings yield is 151 per cent. The dividend yield on dividends of 15 per cent. (against 121 per cent. before) is the satisfactory one of 5.15 per cent.