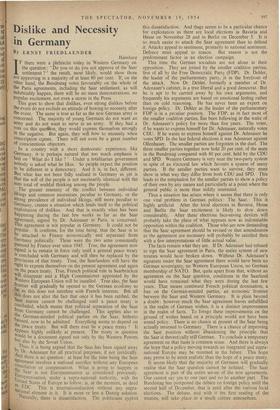 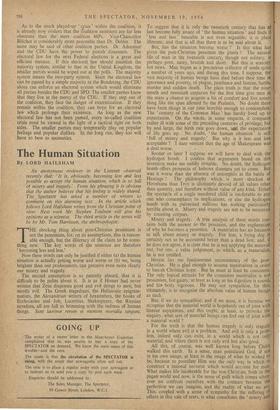 B Y ERNST FRIEDLAENDER Hamburg I[F there were a plebiscite today in Western Germany on the question : ' Do you or do you not approve of the Saar settlement ? ' the result, most likely, would show those not approving in a majority of at least 80 per cent. If, on the other hand, the Bundestag votes favourably on the whole of the Paris agreements, including the Saar settlement, as will indubitably happen, there will be no mass demonstrations, no Popular excitement, not even a storm in the Press.

This goes to show that dislikes, even strong dislikes before the event do not exclude an attitude of bowing to necessity after the event. The same is true as far as the new German army is concerned. The majority of young Germans do not want an army and do not want to serve in an army. If they had a vote on this quehlon, they would express themselves strongly in the negative. But again, they will bow to necessity when conscription comes. There will not even be a great number of conscientious objectors. In a country with a short democratic experience, like Germany, it-is perhaps natural that too much emphasis is laid on ' What do I like ? ' Under a totalitarian government nobody is asked what he likes. So people expect the position to be different in a democracy. And it is, in fact, different. But what has not been fully realised in Germany as yet is that the will of the people is not necessarily identical with the Slim total of wishful thinking among the people. The greater intensity of the conflict between individual likings and common necessities, peculiar to Germany, or the strong prevalence of individual likings, still more peculiar to Germany, creates a situation which lends itself to the political exploitation of dislikes. And that is exactly what has been happening during the last few weeks as far as the Saar agreement, signed by Dr. Adenauer in Paris, is concerned. This agreement is not popular in Germany. It could not be Popular. It confirms, for the time being, that the Saar is to he attached to France economically and separated from Germany politically. These were the two aims consistently Pursued by France ever since 1945. True, the agreement now signed is to remain in force only until a general peace treaty is concluded with Germany and,will then be replaced by the provisions of that treaty. True, the Saarlanders will have the right to express themselves on the present agreement and again on the peace treaty. True, French political rule in Saarbriicken will disappear and a High Commissioner appointed by the Western European Union will be installed. True also, the Saar frontier will gradually be opened to the German economy so far as this does not interfere with French interests. Bet all this does not alter the fact that once it has been ratified.. the Saar statute cannot be challenged until a peace treaty is concluded, which means that political separation of the Saar from. Germany cannot be challenged. This applies also to the German-minded political parties on the Saar, hitherto hanned now to be admitted. Everything seems to depend on the peace treaty. But will there ever be a peace treaty 7 • It appears highly unlikely at present. The treaty in question Would be a document signed not only by the Western Powers but also by the Soviet Union. Thus, it is being argued that the Saar has been signed away by Dr. Adenauer for all practical purposes, if not juridically. And there is no question : at least for the time being the Saar agreement involves a national sacrifice without any European consolation or compensation. What is going to happen in The Saar is not Europeanisation as considered previously. Itlitiropeanisation, under a supra-national authority, with the as States of Europe to follow, is, at the moment, as dead

lE'npaCi . This is internationalisation without any supra- national in it. It is more or less a Danzig solution. Naturally, there is dissatisfaction. The politicians exploit this dissatisfaction. And thece seems to be a particular chance for exploitation as there are local elections in Bavaria and Hesse on November 28 and in Berlin on December 5. It is so much easier to attack the Saar agreement than to defend it. Attacks appeal to sentiment, primarily to national sentiment. Defence must appeal to reason. But reason is not the predominant factor in an election campaign. This time the German socialists are not alone in their opposition. They are joined by the smaller coalition parties, first of all by the Free Democratic Party (FDP). Dr. Dehler, the leader of the parliamentary party, is in the forefront of the attack. Now Dr. Dehler, formerly a member of Dr. Adenauer's cabinet, is a true liberal and a good democrat. But he is apt to be carried away by his own arguments, and frequently his arguments are based on emotional feeling rather than on cold reasoning. He has never been an expert on foreign policy. Dr. Dehler as the leader of the parliamentary FDP is in a peculiar position. The FDP, as in fact most of the smaller coalition parties, flas been following in the wake of Dr. Adenauer's policy for more than five years. The voter, if he wants to express himself for Dr. Adenauer, naturally votes CDU. If he wants to express himself against Dr. Adenauer he votes SPD. In the last federal elections it was Adenauer against 011enhauer. The smaller parties are forgotten in the duel. The three smaller parties together now hold 20 per cent. of the seats in the Bundestag compared with 80 per cent. held by the CDU and SPD. Western Germany is very near the two-party system in spite of an electoral law which favours a system of many parties. If the smaller parties want to survive, they must show in what way they differ from both CDU and SPD. This leads to the temptation for the smaller parties to show a policy of their own by any means and .particularly at a point where the general public is more than mildly interested. Thus a situation has arisen where it seems that there is only one vital problem in German politics: The Saar. This is highly artificial. After the local elections in Bavaria, Hesse and Berlin the Saar excitement is likely to slow down considerably. After these elections face-saving devices will probably take the place of what appears now as indomitable opposition within the coalition. Those who are now demanding that the Saar agreement should be revised or that amendments to the agreement are necessary will probably be satisfied then with a few interpretations of little actual value. The facts remain what they are. if Dr. Adenauer had refused to sign the Saar agreement in Paris. the entire system of new treaties would have broken down. Without Dr. Adenauer's signature under the Saar agreement there would have been no German sovereignty, no Western European Union, no German membership of NATO. But, quite apart from that, without an agreement on the Saar question, conditions in the Saarland would have remained what they were during the last few years. That means continued French political domination, a ban on the German-minded parties, an economic frontier between the Saar and Western Germany. It is plain beyond a doubt: however much the Saar agreement leaves unfulfilled in the realm of German wishes, it is a distinct improvement in the realm of facts. To forego these improvements on the ground of wishes based on a principle would not have been sound policy. There is no chance at present of the Saar being actually returned to Germany. There is a chance of improving the Saar position without abandoning the principle that the Saar is theoretically still German. To conclude a temporary agreement on that basis is common sense. And there is always the hope that a policy moving towards an integrated and supra- national Europe may be resumed in the future. This hope may prove to be more realistic than the hope of a peace treaty. It seems likely that the majority of Germans will gradually realise that the Saar question cannot be isolated. The Saar agreement is part of the entire set-up of the new agreements. One cannot say yes to one part and no to another part. The Bundestag has postponed the debate on foreign policy until the second half of December, that is until after the various local elections. The debate. and with it the first reading of the treaties, will take place -in a much calmer atmosphere. As to the much played-up ' within the coalition, it

is already now evident that the Coalition ministers are far less obstinate than the mere coalition MPs. Vice-Chancellor Blucher is considerably more peaceable than Dr. Dehler. The same may be said of other coalition parties. Dr. Adenauer and the CDU have the power to punish dissenters. The electoral law for the next Federal elections is a great and efficient menace: If this electoral law should establish the majority system, similar to that in the United Kingdom, the smaller parties would be wiped out at the polls. The majority system means the two-party system. Since the electoral law can be passed by a simple majority in the Bundestag, the CDU alone can enforce an electoral system which would eliminate all parties besides the CDU and SPD. The smaller parties know that they live at the mercy of the CDU. If they step out of the coalition, they face the danger of extermination. If they remain within the coalition, they can hope for an electoral law which prolongs their existence. As long as the new electoral law has not been passed, every so-called coalition crisis must be viewed in the light of a tactical light on both sides. The smaller parties may temporarily play on popular feelings and popular dislikes. In the long run, they too will have to bow to necessities.