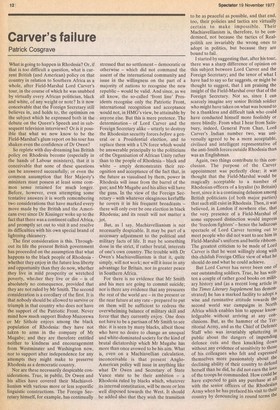 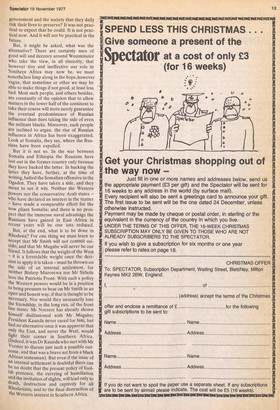 What is going to happen in Rhodesia? Or, if that is too difficult a question, what is current British (and American) policy on that country in relation to Southern Africa as a whole, after Field-Marshal Lord Carver's tour, in the course of which he was snubbed by virtually every African politician, black and white, of any weight or note? Is it now conceivable that the Foreign Secretary still believes in, and holds to, the optimism on the subject which he expressed both in the debate on the Queen's Speech and in subsequent television interviews? Or is it possible that what we now know to be the Field-Marshal's glum report on his tour has shaken even the ,confidence of Dr Owen?

So replete with day-dreaming has British policy on Rhodesia become (especially in the hands of Labour ministers), that it is conceivable that none of these questions can be answered successfully; or even the common assumption that Her Majesty's ministers must possess at least some common sense retained for much longer. Before, however, even attempting some tentative answers it is worth remembering two considerations that have marked every move made by the British and the Americans ever since Dr Kissinger woke up to the fact that there was a continent called Africa, and promptly set out to visit it and resolve its difficulties with his own special brand of lightning chicanery.

The first consideration is this. Throughout its life the present British government has proceeded on the assumption that what happens to the black people of Rhodesia whether they enjoy in the future less liberty and opportunity than they do now, whether they live in mild prosperity or wretched poverty, whether they live or die — is of absolutely no consequence, provided that they are not ruled by Mr Smith. The second consideration is a corollary of the first. It is that nobody should be allowed to survive or triumph in that country who does not have the support of the Patriotic Front. Never mind how much support Bishop Muzorewa or Mr Sithole enjoys among the black population of Rhodesia: they have not taken to arms in the company of Mr Mugabe; and they are therefore entitled neither to kindness and encouragement from Westminster and Washington now, nor to support after independence for any attempts they might make to preserve Rhodesia as a democratic country.

Nor are these necessarily despicable considerations. True, in public, Dr Owen and his allies have covered their Machiavellianism with various more or less soporific linguistic constructions. The Foreign Secretary himself, for example, has continually stressed that no settlement — democratic or otherwise — which did not command the assent of the international community and issue in the willingness on the part of a majority of nations to recognise the new republic — would be valid. And since, as we all know, the so-called 'front line' Presidents recognise only the Patriotic Front, international recognition and acceptance would not, in HMG's view, be attainable by anyone else. But this is mere pretence. The determination — of Lord Carver and the Foreign Secretary alike — utterly to destroy the Rhodesian security forces before a general or a Presidential election, and to replace them with a UN force which would be answerable principally to the politicians of the Organisation of African Unity rather than to the people of Rhodesia — black and white — amply demonstrates their recognition and acceptance of the fact that, in the future as visualised by them, power in Rhodesia will issue from the barrel of the gun; and Mr Mugabe and his allies will have the guns. In the view of the Foreign Secretary — with whatever oleaginous kerfuffle he covers it in his frequent broadcasts — there will only ever be one election in black Rhodesia; and its result will not matter a jot.

But, as I say, Machiavellianism is not necessarily despicable. It may be part of a necessary adjustment to the political and military facts of life. It may be something done in the strict, if rather brutal, interests of one's own country. The trouble with Dr Owen's Machiavellianism is that it, quite simply, will not work; nor will it issue in any advantage for Britain, nor in greater peace in Southern Africa.

For there is no evidence that Mr Smith and his men are going to commit suicide; nor is there any evidence that any pressures the rest of the world are — in the present or the near future at any rate prepared to put on them will be sufficient to redress the overwhelming balance of military skill and force-that they currently enjoy. One does not have to be a partisan of Mr Smith to see this: it is seen by many blacks, albeit those who have no desire to change an unequal and white-dominated society for the kind of brutal dictatorship which Mr Mugabe has more than once avowed to be his aim. What is, even on a Machiavellian calculation, inconceivable is that present AngloAmerican policy will issue in anything like what Dr Owen and Secretary of State Vance state to be their ambition — a Rhodesia ruled by blacks which, whatever its internal constitution, will be more or less well disposed towards the West. It should be added also that they wish the transition to be as peaceful as possible, and that end, too, their policies and tactics are virtually certain to make impossible. Their Machiavellianism is, therefore, to be condemned, not because the tactics of Realpolitik are invariably the wrong ones to adopt in politics, but because they are bound to fail.

I started by suggesting that, after his tour, there was a sharp difference of opinion on this subject between Lord Carver and the Foreign Secretary; and the tenor of what I have had to say so far suggests, or might be thought to suggest, that I am praising the insight of the Field-Marshal over that of the Foreign Secretary. Not so, since I can scarcely imagine any senior British soldier who might have taken on what was bound to be a thankless and difficult task who could have conducted himself more foolishly or more blindly. From what I hear from Salisbury, indeed, General Prem Chan, Lord Carver's Indian number two, was universally agreed to be a more acceptable, civilised and intelligent representative of the anti-Smith forces outside Rhodesia than was an Englishman.

Again, two things contribute to this conclusion. The purpose of the Carver appointment was perfectly clear: it was thought that the Field-Marshal would be magically acceptable to a number of Rhodesian officers of a loyalist (to Britain) bent, since it is a continuing delusion among British politicians (of both major parties) that such still exist in Rhodesia. Then, it was believed, in London if nowhere else, that the very presence of a Field-Marshal of some supposed distinction would impress the 'freedom fighters' — hence the ludicrous spectacle of Lord Carver turning out to meet people who did not want to see him in Field-Marshal's uniform and battle ribbons. The greatest criticism to be made of Lord Carver is that he went willingly along with this childish Foreign Office view of what he should do and what he could achieve.

But Lord Carver has never been one of our outstanding soldiers. True, he has written a couple of rather good books on military history and (as a recent long article in the Times Literary Supplement has demonstrated) he has a marked facility to adopt a wise and ruminative attitude towards the second world war campaigns in North Africa which enables him to appear knowledgeable without arriving at any conclusions. But, as the hammer of the Territorial Army, and as the Chief of Defence Staff who was invariably spluttering in public about the dangers of impending defence cuts and then knuckling down without any evidence of sensitivity to those of his colleagues who felt and expressed themselves more passionately about the declining ability of their country to defend herself than he did, he did not earn the love of the troops he commanded. How could he have expected to gain any purchase at nil with the senior officers of the Rhodesian Army when he has prefaced his visit to their country by denouncing in round terms the government and the society that they daily risk their lives to preserve? It was not practical to expect that he could. It is not practical now. And it will not be practical in the future.

But, it might be asked, what was the alternative? There are certainly men of good will and decency around Westminster who take the view, in all sincerity, that however tiny and ineffective our role in Southern Africa may now be, we must nonetheless limp along in the hope,however vague, that sometime or other we may be able to make things if not good, at least less bad. Most such people, and others besides, are constantly of the opinion that to allow matters in the lower half of the continent to take their course will more surely guarantee the eventual predominance of Russian influence than does taking the side of even the militant blacks. Moreover, such people are inclined to argue, the rise of Russian influence in Africa has been exaggerated. Look at Somalia, they say, where the Russians have been expelled.

But it is not so. In the war between Somalia and Ethiopia the Russians have lost out in the former country only because they have backed the latter. In backing the latter they have, further, at the time of writing, halted the Somalian offensive in the Ogaden. They have taken a side, and they mean to see it win. Neither the Western Powers nor the conservative Arab states — Who have declared an interest in the matter — have made a comparable effort for the now pliant Somalia; and there is no prosPeet that the immense naval advantage the Russians have gained in East Africa in recent years will be one iota reduced.

But, at the end, what is to be done in Rhodesia? For one thing we must learn to accept that Mr Smith will not commit suicide; and that Mr Mugabe will never be our friend. It follows that the weight of the West — it is a formidable weight once the decision to apply it is taken — must be thrown on the side of an internal settlement, for neither Bishop Muzorewa nor Mr Sithole love the Patriotic Front. With such a policy the Western powers would be in a position to bring pressure to bear on Mr Smith in an Open and honest way, if that is thought to be necessary. Nor would they necessarily lose the friendship, in the long run, of the front line states. Mr Nyerere has already shown himself disillusioned with Mr Mugabe; President Kaunda never cared for him, but had no alternative once it was apparent that only the East, and never the West, would fight their corner in Southern Africa. (Indeed, it was Dr Kaunda who met with Mr Vorster to discuss just such a possible out come, and that was a brave act from a black African statesman). But even if the issue of an internal settlement is doubtful there can be no doubt that the present policy of foolish pretence, the currying of humiliation and the invitation of slights, will lead only to death, destruction and captivity for all Rhodesians, and to the final destruction of the Western interest in Southern Africa.