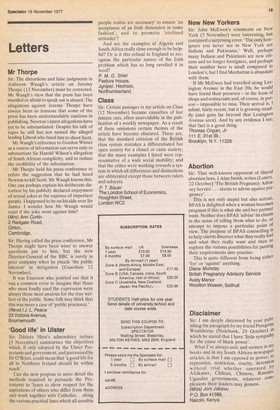 Sir: The distortions and false judgments in Auberon Waugh's article on Jeremy Thorpe (12 November) must be corrected. Mr Waugh's view that the press has been muzzled or afraid to speak out is absurd. The allegations against Jeremy Thorpe have always been so tenuous that some of the press has been understandably cautious in publishing. Newton's latest allegations have yet to be substantiated. Despite his talk of tapes he still has not named the alleged leading Liberal who hired him to shoot Scott.

Mr Waugh's reference to Gordon Winter as a source of information can serve only to substantiate Sir Harold Wilson's allegation of South African complicity, and to reduce the credibility of the information.

Mr Thorpe held his press conference to refute the suggestion that he had hired Newton to kill Scott. Mr Waugh knows this. One can perhaps explain his deliberate distortion by his publicly declared enjoyment of sexual jokes at the expense of important people. I happened to be on his side over Sir James. I wonder how Mr Waugh would react if the joke went against him?

Sir: Having called the press conference, Mr Thorpe might have been wiser to answer questions put to him, but the new Director-General of the BBC is surely in poor company when he pleads 'the public interest' in mitigation (Guardian 12 November).

It was Emerson who pointed out that it was a common error to imagine that those who most loudly used the expression were always those most anxious for the true welfare of the public. Some folk may think that this was more a case of 'public prurience.' (Revd.) J. L. Peace 33 Victoria Avenue, Bournemouth