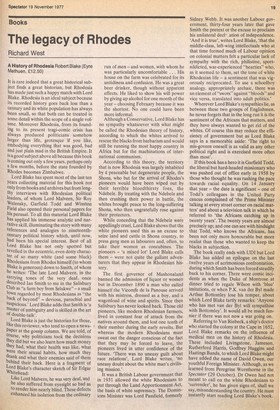 The legacy of Rhodes

A History of Rhodesia Robert Blake (Eyre Methuen, E12.50) It is rare indeed that a great historical subject finds a great historian, but Rhodesia has made just such a happy match with Lord Blake. Rhodesia is an ideal subject because its recorded history goes back less than a century and its white population has always been small, so that both can be treated in some detail within the scope of a single volume. Moreover Rhodesia, from its founding to its present tragi-comic crisis has always produced politicians somehow larger than life, grotesque if you like, embodying everything that was good, bad and just plain mad in the British Empire. It is a good subject above all because this book is coming out only a few years, perhaps only a few months, before the state founded by Rhodes becomes Zimbabwe.

Lord Blake has spent most of the last ten Years collecting material for this book not Only from books and archives but from lengthy interviews with Rhodesian political leaders, of whom Lord Malvern, Sir Roy Welensky, Garfield Todd and Winston Field also opened their personal papers for his perusal. To all this material Lord Blake has applied his immense analytic and narrative skill, illuminating the story with many references and analogies to nineteenthcentury political history which, until now, had been his special interest. Best of all Lord Blake has not only spotted but revelled in the eccentric, even dotty character of so many white (and some black) Rhodesians from Rhodes himself (to whom Blake is generous) down to Smith, of whom he writes: The late Lord Malvern, in the carrying. tones of the very deaf, once described Ian Smith to me in the Salisbury Club as "a farm boy from Selukwe" a small town regarded by most Rhodesians as "the back of beyond" — devious, parochial and suspicious.' Lord Blake adds that Smith is 'a Master of ambiguity and is skilled in the art of double-talk'.

Lord Blake is just the historian for those, like this reviewer, who tend to open a newsPaper at the gossip column. We are told, of Course, why politicians took the decisions they did but we also learn how much money they had, what their health was like, what were their sexual habits, how much they drank and what their enemies said of them behind their back. Here is a fragment of Lord Blake's character sketch of Sir Edgar Whitehead: Like Lord Malvern, he was very deaf, and he also suffered from eyesight so bad as to render him nearly blind. These defects enhanced his isolation from the ordinary run of men — and women, with whom he was particularly uncomfortable . . . His house on the farm was celebrated for its untidiness and confusion. He was a great beer drinker, though without apparent effects. He liked to show his will power by giving up alcohol for one month of the year — choosing February because it was the shortest. No one could have been more informal.

Although a Conservative, Lord Blake has no sympathy whatsoever with what might be called the Rhodesian theory of history, according to which the whites arrived to rescue the blacks from barbarism and would still be running the most happy country in Africa but for the machinations of international communism.

According to this theory, the territory that is now Rhodesia was largely inhabited by if peaceable but degenerate people, the Shona, who but for the arrival of Rhodes's pioneers would have been wiped out by their terrible bloodthirsty foes, the Ndebele. By treating with the Ndebele and then crushing their power in battle, the whites brought peace to the long-suffering Shona, who then ungratefully rose against their protectors.

While conceding that the Ndebele were appallingly cruel, Lord Blake shows that the white pioneers used this as an excuse to seize land and cattle in Shona country, to press gang men as labourers and, often, to take their women as concubines. The pioneers — 'a mixed lot' Lord Blake calls them — were not quite the gallant adventurers that they appear in Rhodesian history.

The first governor of Mashonaland banned the admission of liquor or women but in December 1890 a man who called himself the Vicomte de la Panouse arrived with his mistress, dressed as a boy, and a wagonload of wine and spirits. Since then Salisbury has never looked back. Those old pioneers, like modern Rhodesian farmers, lived in constant fear of attack from the natives around them, and lost one tenth of their number during the early revolts. But whereas the modern Rhodesians must sweat out the danger conscious of the fact that they may be forced to leave, the pioneers lived in utter confidence of the future. 'There was no uneasy guilt about race relations', Lord Blake writes, `no uneasy doubt about the white man's civilising mission.' It was a British Labour government that in 1931 allowed the white Rhodesians to put through the Land Apportionment Act, the basis of white supremacy. The Dominions Minister was Lord Passfield, formerly Sidney Webb. It was another Labour government, thirty-four years later that gave Smith the pretext or the excuse to proclaim his unilateral decl.. ation of independence. 'And it is true', writes Lord Blake, `.that the• middle-class, left-wing intellectuals who at that time formed much of Labour opinion on colonial matters felt a particular lack of sympathy with the rich, philistine, sportaddicted, war-experienced "hearties" who, as it seemed to them, set the tone of white Rhodesian life — a sentiment that was vigorously reciprocated. To use a schoolboy analogy, appropriately archaic, there was an element of "swots" against "bloods" and vice versa, translated into adult politics.'

Wherever Lord Blake's sympathies lie, as between these two groups of Englishmen, he never forgets that in the long run it is the sentiment of the Africans that matters, and they have always wanted to get rid of the whites. Of course this may reduce the efficiency of government but as Lord Blake says in a memorable aside: 'The right to mis-govern oneself is as valid as any other political right and is exercised more often than most'.

If this book has a hero it is Garfield Todd, the liberal but hard-headed missionary who was pushed out of office early in 1958 by those who thought he was rushing the pace towards racial equality. On 14 January that year — the date is significant — one of Todd's colleagues in the United Party caucus complained of 'the Prime Minister talking at every street corner on racial matters' and about a television talk in which he referred to 'the Africans catching up in twenty years'. The twenty years are almost precisely up; and one can see with hindsight that Todd, who knows the Africans, has been not only more honourable but more realist than those who wanted to keep the blacks in subjection.

The book really ends with UDI but Lord Blake has added an epilogue on the last twelve years of acrimonious confrontation, during which Smith has been forced steadily back to his corner. There were comic incidents as when the Duke of Montrose at dinner tried to regale Wilson with 'blue' imitations, or when P.K. van der Byl made Arthur Bottomley lose his temper, about which Lord Blake tartly remarks: 'Anyone who has met van der Byl will sympathise with Bottomley'. It would all be much funnier if there was not now a war going on.

Referring to Van Riebeck, a ship's doctor who started the colony at the Cape in 1652, Lord Blake remarks on the, influence of medical men on the history of Rhodesia. These included Livingstone, Jameson, Rutherford Harris, Godfrey Huggins and Hastings Banda, to which Lord Blake might have added the name of David Owen, our youthful Foreign Minister. Although, as we learned from Peregrine Worsthorne in the Spectator (29 October). Dr Owen had not meant to call on the white Rhodesians to 'surrender', he has given signs of, shall we say, misunderstanding the country. He must instantly start reading Lord Blake's book.