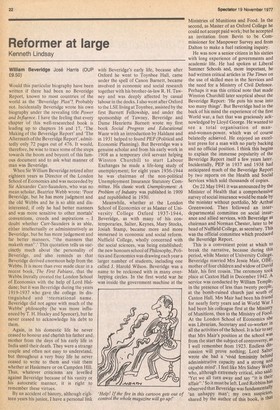 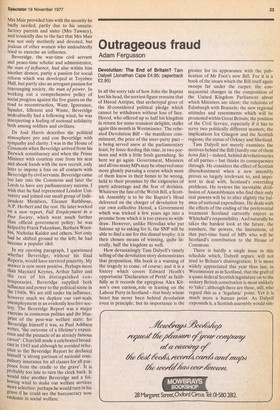 William Beveridge Jose Harris (OUP £9.50) Would this particular biography have been written if there had been no Beveridge Report, known to most countries of the world as the 'Beveridge Plan'? Probably not. Incidentally Beveridge wrote his own biography under the revealing title Power and Influence. I have the feeling that every chapter of this well-researched book is leading up to chapters 16 and 17, 'The Making of the Beveridge Report' and 'The Aftermath of the Beveridge Report', admittedly only 72 pages out of 476. It would, therefore, be wise to trace some of the steps towards the boom and boycott of this famous document and to ask what manner of man was Beveridge.

When Sir William Beveridge retired after eighteen years as Director of the London School of Economics and was succeeded by Sir Alexander Carr-Saunders, who was no mean scholar, Beatrice Webb wrote; 'Poor Beveridge, but he has more judgment and the old Webbs and he is so able and disinterested; if only he had better manners and was more sensitive to other mortals' conventions, creeds and aspirations — I doubt whether Carr-Saunders is as able, either intellectually or administratively as Beveridge, but he has more judgement and far better manners, "the manners that maketh man".' This quotation tells us succinctly much about the personality of Beveridge, and also reminds us that Beveridge derived enormous help from the Webbs. It is more than ever made clear in a recent book, The First Fabians, that the Webbs literally created the London School of Economies with the help of Lord Haldane; but it was Beveridge during the years 1919-1937 who gave the college its distinguished and Titernational name. Beveridge did not agree with much of the Webbs' philosophy (he was more influenced by T. H. Huxley and Spencer), but he never ceased to acknowledge his debt to them.

Again, in his domestic life he never ceased to honour and cherish his father and mother from the days of his early life in India until their death. They were a strange couple and often not easy to understand, but throughout a very busy life he never ceased to write to them and visit them whether at Haslemere or on Campden Hill. Thus, whatever criticisms are levelled against Beveridge because of his vanity or his autocratic manner, it is right to remember these virtues.

By an accident of history, although eighteen years his junior, I have a personal link with Beveridge's early life, because after Oxford he went to Toynbee Hall, came under the spell of Canon Barnett, became involved in economic and social research together with his brother-in-law R. H. Tawney and was deeply affected by casual labour in the docks. I also went after Oxford to the LSE living at Toynbee, assisted by the first Barnett Fellowship, and under the sponsorship of Tawney, Beveridge and Dame Henrietta Barnett wrote my first book Social Progress and Educational Waste with an introduction by Haldane and in 1931 helped to found PEP (Political and Economic Planning). But Beveridge was a genuine scholar and from his early work in 1908 as a temporary civil servant helping Winston Churchill to start Labour Exchanges he made a life-long study of unemployment; for eight years 1936-1944 he was chairman of the non-political Unemployment Insurance Statutory Committee. His classic work Unemployment: A Problem of Industry was published in 1909 and republished in 1930.

Meanwhile, whether at the London School of Economics or as Master of University College Oxford 1937.1944, Beveridge, as with many of his contemporaries, Salter, Keynes, Mary Stocks, Josiah Stamp, became more and more immersed in economic and social reform, Nuffield College, wholly concerned with the social sciences, was being established; the new honours school of Philosophy, Politics and Economics was drawing each year a larger number of students, including one called J. Harold Wilson. Beveridge was a name to be reckoned with in many overlapping circles. In the first world war he was inside the government machine at the Ministries of Munitions and Food. In the second, as Master of an Oxford College he could not accept paid work; but he accepted an invitation from Bevin to be Commissioner for Manpower Survey and from Dalton to make a fuel rationing inquiry.

He was now a senior citizen in his sixties with long experience of governments and academic life. He had spoken at Liberal Summer Schools and, more important, he had written critical articles in The Times on the use of skilled men in the Services and the need for a Ministry of Civil Defence. Perhaps it was this critical note that made Winston Churchill later sceptical about the Beveridge Report: 'He puts his nose into too many things'. But Beveridge had in the back of his mind the experience of the first World war, a fact that was graciously acknowledged by Lloyd George. He wanted to see a total organisation of manand-woman-power, which was of course belatedly achieved. He enjoyed an excellent press for a man with no party backing and no official position. I think this begins to explain the immense popularity of the Beveridge Report itself a few years later. Incidentally, PEP in 1937 and 1938 had anticipated much of the Beveridge Report by two reports on the Health and Social Services which sold thousands of copies.

On 22 May 1941 it was announced by the Minister of Health that a comprehensive survey of social insurance would be made by the minister without portfolio, Mr Arthur Greenwood. Then followed an interdepartmental committee on social insurance and allied services, with Beveridge as chairman and Norman Chester, later to be head of Nuffield College, as secretary. This was the official committee which produced the Beveridge Report.

This is a convenient point at which to break the narrative, because during this period, while Master of University College, Beveridge married Mrs Jessie Mair, OBE, mother of four children and widow of David Mair, his first cousin. The ceremony took place at Caxton Hall in December 1942, A service was conducted by William Temple, in the presence of less than twenty people, at the bomb-ruined church just south of Caxton Hall. Mrs Mair had been his friend for nearly forty years and in World War I had been his colleague first at the Ministry of Munitions, then in the Ministry of Food. At the London School of Economics she was Librarian, Secretary and co-worker in all the activities of the School. It is fair to saY that Mrs Mair's position at the school was from the start the subject of controversy, as I well remember from 1923. Endless discussion will prove nothing; Lord Salter wrote she had a 'vivid femininity behind administrative capacity and a strong and capable mind'. I feel like Mrs Sidney Webb who, although extremely critical, also said.: 'Yet we all turn away and say "it is their affair".' So it must be left. Lord Robbins has observed that Beveridge was fundamentallY 'an unhappy man'; my own suspicion, shared by the author of this bbok, is that Mrs Mair provided him with the security he badly needed, partly due to his unsatisfactory parents and sister (Mrs Tawney), and ironically due to the fact that Mrs Mair was not only motherly and devoted, but jealous of other women who undoubtedly tried to exercise an influence.

Beveridge, the war-time civil servant and peace-time scholar and administrator, the man of influence, had also within him another demon, partly a passion for social reform which was developed at Toynbee Hall, but partly also an arrogant passion for rearranging society, the man of power., In working out a comprehensive policy of social progress against the five giants on the road to reconstruction, Want, Ignorance, Squalor, Idleness and Waste, Beveridge undoubtedly had a following wind; he was interpreting a feeling of national solidarity both among soldiers and civilians.

Dr Jose Harris describes the political atmosphere pro and con Beveridge with Sympathy and clarity. I was in the House of Commons when Beveridge arrived from his Berwick constituency and when the Prime Minister with courtesy rose from his seat and shook hands with the new recruit, only later to impose a ban on all contacts with Beveridge by civil servants. Beveridge came too late into the Commons and later the Lords to have any parliamentary success. I wish that he had represented London University and joined our small group of Independent Members, Eleanor Rathbone, A.P. Herbert and the rest. He later worked on a new report, Full Employment in a Free Society, which went much further than official government policy; he was helped by Frank Pakenham, Barbara Wootton, Nicholas Kaldor and others. Not only had he shifted ground to the left; he had become a popular idol.

In my opening paragraph, I questioned Whether Beveridge, without his final Reports, would have survived posterity. My answer is now more positive. Perhaps more than Maynard Keynes, Arthur Salter and the rest of his distinguished contemporaries, Beveridge supplied both influence and power to the political scene in the 1940s. We are still under his influence, however much we deplore our vast-scale unemployment in an evidently less free society. The Beveridge Report was a major exercise in consensus politics and the blueprint of the post-war welfare state: for Beveridge himself it was, as Paul Addison writes, 'the outcome of a lifetime's experience and the pinnacle of an already famous career'. Churchill made a celebrated broadcast in 1943 and although he avoided reference to the Beveridge Report he declared himself 'a strong partisan of national comPulsory insurance for all classes for all purPoses from the cradle to the grave'. It is Probably too late to turn the clock back. It would take another Beveridge and a following wind to Make our welfare services more selective: perhaps he would turn in his grave if he could see the bureaucracy now endemic in social welfare.