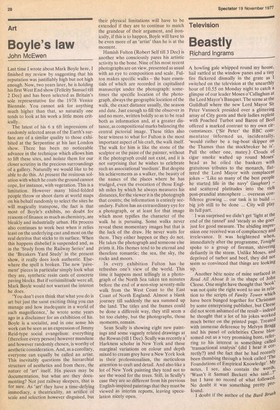 John McEwen Last time I wrote about Mark Boyle here, I finished my review by suggesting that his reputation was justifiably high but not high enough. Now, two years later, he is holding his first West End show (Felicity Samuel till 2 Dec) and has been selected as Britain's sole representative for the 1978 Venice Biennale. You cannot ask for anything much higher than that, so naturally one tends to look at his work a little more critically.

The latest of his 6 x 6ft impressions of randomly selected areas of the Earth's surface are of a similar quality to those exhibited at the Serpentine at his last London show. There has been no noticeable advance in the technique which allows him to lift these sites, and isolate them for our closer scrutiny in the precious surroundings of a gallery. Naturally we would like to be able to do this. At present the resinous solution with which he coats the ground cannot cope, for instance, with vegetation. This is a limitation. However many blind-folded people throw or shoot darts at world maps on his behalf randomly to select the sites he will magically transpose, the fact is that most of Boyle's exhibits, no doubt for reasons of finance as much as chemistry, are bleakly and industrially urban. His process also continues to work best when it relies least on the underlying cast and most on the real detritus that sticks to its surface. When this happens disbelief. is suspended and, as in the 'Study from the Railway Series' and the 'Breakers Yard Study' in the present show, it really does look authentic. Elsewhere the spell is broken. The new 'pavement' pieces in particular simply look what they are, synthetic resin casts of concrete paving blocks. But if verisimilitude were all, Mark Boyle would not warrant the interest he does, 'You don't even think that what you do is art hut just the most exciting thing you can manage and how inadequate in a world of such magnificence,' he wrote some years ago in a disclaimer for an exhibition of his. Boyle is a socialist, and in one sense his work can be seen as an expression of Jimmy Reid-type social evangelism: everything (therefore every person) however mundane and however randomly chosen, is worthy of aesthetic consideration. And, as a corollary, everyone can equally be called an artist. This inevitably questions the hierarchial structure of aesthetics and from there, the nature of 'art' itself. His pieces may be documentation, but what are they documenting? Not just railway sleepers, that is for sure, As 'art' they have a time-defying immediacy, a theatricality, an artifice of scale and selection however disguised, but their physical limitations will have to be extended if they are to continue to match the grandeur of their argument, and ironically, if this is to happen, Boyle will have to be even more of an 'artist' than he is at the moment.

Hamish Fulton (Robert Self till 3 Dec) is another who consciously pares his artistic activity to the bone. Nine of his most recent photographs are on view, presented as usual with an eye to composition and scale., Fulton makes specific walks — the bare essentials of which are recorded in capitalised manuscript under the photograph: sometimes the specific location of the photograph, always the geographic location of the walk, the exact distance usually, the season and date. Just enough to fill the observer in and no more, written boldly so as to be read both as information and, at a greater distance, as compositional marks balancing the central pictorial image. These titles also bear witness to what for Fulton is the most important aspect of his craft, the walk itself. The walk for him is like the stone of the sculptor or the paint of the painter, without it the photograph could not exist, and it is not surprising that he wishes to celebrate such an associational 'medium'. But despite his achievements as a walker, the beauty of the names of the places where he has trudged, even the evocation of those English miles by which he always measures his distances, for the viewer it is the photograph that counts; the information is entirely secondary. Fulton has an extraordinary eye for a photograph, or at least for that image which most typifies the character of the walk he is pursuing. Some walks never reveal these momentary images but that is the luck of the draw. He never waits for them. They either happen or they do not. He takes the photograph and someone else prints it, His themes tend to be eternal and therefore romantic; the sea, the sky, the rocks and moors.

In every exhibition Fulton has he refreshes one's view of the world. This time it happens most tellingly in a photograph of the North Sea taken ten minutes before the end of af con-stop seventy-mile walk from the West Coast to the East Coast of North England. Almost a blank journey till suddenly the sea summed up the land. The titles and the frames could be done a different way, they still seem a bit too clubby, but the photographs, those moments, remain.

Sean Scully is showing eight new paintings and some vaguely related drawings at the Rowan (till 1 Dec). Scully was recently a' Harkness scholar in New York and these marginal variations on colour and depth mixed to cream grey have a New York look in their professionalism, the meticulous attention to craft and detail. And also like a lot of New York painting they tend not to see the wood for the trees. Still, in Scully's case they are so different from his previous English-inspired paintings that they must be viewed as interim reports, leaving speculation nicely open.