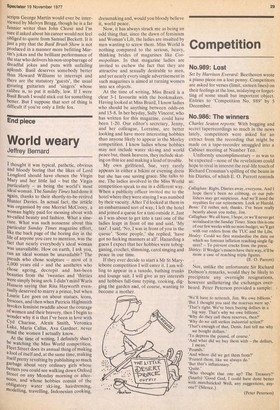 I thought it was typical, pathetic, obvious and bloody boring that the likes of Lord Longford should have chosen the Virgin Mary and her little lad — but the Virgin Particularly — as being the world's most Ideal woman. The Sunday Times had done it again, thanks to their shortly-to-be-retired Hunter Davies. In actual fact, the article was organised by one Merriel McCooey, a Woman highly paid for messing about with 50-called beauty and fashion. What a sinecure. What was such nonsense about this Particular Sunday Times magazine effort, like the back page of the boring day in the life of anyone you care to mention, was the fact that nearly everybody's ideal woman was unavailable. How on earth, I ask you, can an ideal woman be unavailable? The pseuds who chose sculpture — most of it 2,000 years old — and the aesthetes who Chose ageing, decrepit and has-been beauties from the 'twenties and 'thirties were simply being arch. I didn't mind Waris Hussein saying that Rita Hayworth eventually deserved to marry a prince, but when Laurie Lee goes on about statues, icons, frescoes, and then when Patricia Highsmith Invokes feminist twaddle about the courage of women and their bravery, then I begin to wonder why it is that I've been in love with Cyd Charisse, Alexis Smith, Veronica Lake, Maria Callas, Ava Gardner, never mind the women I actually know.

At the time of writing, I definitely shan't be watching the Miss World competition. Fleet Street does its annual thing of making a fool of itself and, at the same time, making itself pretty revolting by publishing so much garbage about very ordinary girls whose betters you could see walking down Oxford Street on any Monday morning or afternoon, and whose hobbies consist of the Obligatory water ski-ing, hairdressing, modelling, travelling, Indonesian cooking, dressmaking and, would you bloody believe it, world peace.

Now, it has always struck me as being an odd thing that, since the dawn of feminism and Woman's Lib, the ladies are insulted by men wanting to screw them. Miss World is nothing compared to the serious, heavy, thinking brides of magazines like Cosmopolitan. In that magazine ladies are invited to eschew the fact that they are attractive and sexually desirable to men, and yet nearly every single advertisement in such magazines is aimed at turning women into sex objects.

At the time of writing, Miss Brazil is a clear 3-1 favourite with the bookmakers. Having looked at Miss Brazil, I know ladies who should be anything between odds-on and 15-8. In her heyday, Sally Vincent, who has written for this magazine, could have been 1-20. Our editor's secretary, Jenny, and her colleague, Lorraine, are better looking and have more interesting hobbies than anyone likely to appear in the Morley competition. I know ladies whose hobbies may not include water ski-ing and world peace but, thank heavens, they include skating on thin ice and making a load of trouble.

My own girlfriend, Sue, very rarely appears in either a bikini or evening dress but she has one saving grace. She talks to me. The ladies involved in the Miss World competition speak to me in a different way. When a publicity officer invited me to the hotel where they were staying I was numbed by their vacuity. After I'd looked at them in an embarrassed sort of way, I left the hotel and joined a queue for a taxi outside it. Just as I was about to get into a taxi one of the ladies leapt in front of me and said, 'My taxi'. I said, `No, I was in front of you in the queue'. 'Some people,' she replied, 'have got no fucking manners at all'. Hazarding a guess I expect that her hobbies were tobogganing, crochet, slimming, carol singing and peace in our time.

If they ever decide to start a Mr St Marylebone competition I will enter it. I am willing to appear in a tuxedo, bathing trunks and lounge suit. I will give as my interests and hobbies full-time typing, cooking, digging the garden and, of course, wanting to become a mother.