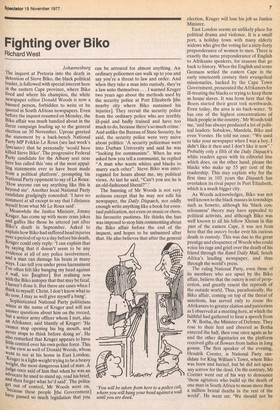 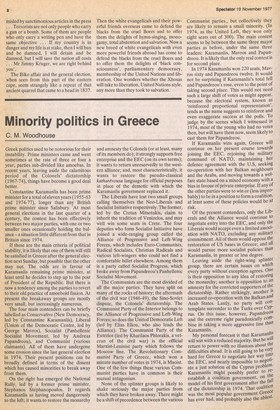 Johannesburg The inquest at Pretoria into the death in detention of Steve Biko, the black political 'leader, is followed with special interest here in the eastern Cape province, where Biko lived and where his champion, the white newspaper editor Donald Woods is now a banned person, forbidden to write or be quoted in South African newspapers. Even before the inquest resumed on Monday, the Biko affair was much bandied about in the fierce campaign leading up to the general election on 30 November. Uproar greeted the statement by a back-bench National Party MP Frikkie Le Roux (see last week's Spectator) that he personally 'would have killed Steve Biko'. The progressive Federal Party candidate for the Albany seat near here has called this 'one of the most appalling statements ever to have been made from a political platform', prompting his National Party opponent to say of Le Roux: 'How anyone can say anything like this is beyond me'. Another local National Party candidate grudgingly conceded: 'I have no comment at all except to say that I distance Inyself from what Mr Le Roux said'.

Meanwhile the Justice Minister, Jimmy Kruger, has come up with more crass jokes and gaffes like those he uttered just after Biko's death in September. Asked to explain how Biko had suffered head injuries over a period of up to a day before his death, Kruger could only reply: 'I can explain that by saying that it doesn't seem to be any evidence at all of any police involvement, and a man can damage his brain in many ways. I can tell you under press harassment I've often felt like banging my head against a wall, too Daughter]. But realising now with the Biko autopsy that that may be fatal; I haven't done it. But there are cases when I think to myself: Christ, I don't know what to do now, I may as well give myself a bang'. Sophisticated National Party politicians wince at the name of Kruger and will not answer questions about him on the record, but a senior army officer whom I met, also an Afrikaner, said bluntly of Kruger: 'He cannot stop opening his big mouth, and never stops to think before doing so'. He also remarked that Kruger appears to have little control over his own police force. This is the view as well of Donald Woods, whom went to see at his home in East London: 'Kruger is a light-weight trying to be a heavy Weight, the most dangerous kind of man. A Judge once said of him that when he was an advocate he used to stand up, read his brief, and then forget what he'd said'. The police get out of control, Mr Woods went on, :because these people [the Government] nave passed so much legislation that you can be arrested for almost anything. An ordinary policemen can walk up to you and say you're a threat to law and order. And when they take a man into custody, they're a law unto themselves . . . I warned Kruger two years ago about the methods used by the security police at Port Elizabeth [the nearby city where Biko sustained his injuries]. They recruit the security police from the ordinary police who are terribly ill-paid and badly trained and have too much to do, because there's so much crime.' And unlike the Bureau of State Security, he said, the security police were very naive about politics: 'A security policeman went into Durban University and said he was "looking for communists". When he was asked how you tell a communist, he replied "A man who wants whites and blacks to marry each other". Steve Biko was interrogated for hours about me, my political views. At last he said, "Can't you see he is an old-fashioned liberal?".'

The banning of Mr Woods is not very arduous except that he may not edit his newspaper, the Daily Dispatch, nor oddly enough write anything like a book for eventual publication, not even on music or chess, his favourite pastimes. He thinks the ban was imposed to stop him commenting about the Biko affair before the end of the inquest, and hopes to be unbanned after that. He also believes that after the general election, Kruger will lose his job as Justice Minister.

East London seems an unlikely place for political drama and violence. It is a small port, a holiday town with many elderly widows who give the voting list a sixty-forty ipreponderance of women to men. There is exactly the same preponderance of English to Afrikaans speakers, for reasons that go back to history. When the English and some Germans settled the eastern Cape in the early nineteenth century their evangelical missionaries, backed by the Cape Town Government, prosecuted the Afrikaners for ill-treating the blacks or trying to keep them as house slaves. It was from here that the Boers started their great trek northwards. Even today, the area is no back-water. 'It has one of the highest concentrations of black people in the country,' Mr Woods told me, 'and has always produced a lot of political leaders: Sobukwe, Mandela, Biko and even Vorster, He told me once: "We used to take your newspaper when I was a boy. I didn't like it then and I don't like it now"! Probably only a fifth of the Daily Dispatch's white readers agree with its editorial line which does, on the other hand, please the blacks who make up 55 per cent of the readership. This may explain why for the first time in 105 years the Dispatch has overtaken its rival paper in Port Elizabeth, which is a much bigger 'city.

As Woods acknowledges, Biko was not well known to the black masses in townships such as Soweto, although his 'black consciousness' theory may have appealed to political activists, and although Biko was well known to all his fellow Xhosas in this part of the eastern Cape, it was not from here that the outcry broke over his curious death in custody. This was due to the great prestige and eloquence of Woods who could voice his rage and grief over the death of his friend through the Rand Daily Mail, South Africa's leading newspaper, and thus through the world's press.

The ruling National Party, even those of its members who are upset by the Biko affair, believe that the outcry is out of proportion, and greatly resent the reproofs of the outside world. Thus, paradoxically, the Biko affair, coming on top of the threat of sanctions, has served only to rouse the Afrikaners to greater elation and patriotism as I observed at a meeting here, at which the faithful had gathered to hear a speech from P. W. Botha, the Minister of Defence. They rose to their feet and cheered as Botha entered the hall, then rose once again as he and the other dignitaries on the platform received gifts of flowers from ladies in long gowns. The first speaker of the evening, Hendrik Coester, is National Party can' didate for King William's Town, where Biko was born and buried, but he did not spare any sorrow for the dead. On the contrary, Mr Coetser went out of his way to denounce 'those agitators who build up the death of one man in South Africa to mean more than a million brutal deaths in the rest of the world'. He went on: 'We should not be misled by sanctimonious articles in the press . . Terrorists are not only people who carry a gun or a bomb. Some of them are people who only carry a writing pen and have the same objective . . . If my country is in danger and my life is at stake, then I will ban and be damned, I will detain and be damned, but I will save the nation all costs . . . Mr Jimmy Kruger, we are right behind you'.