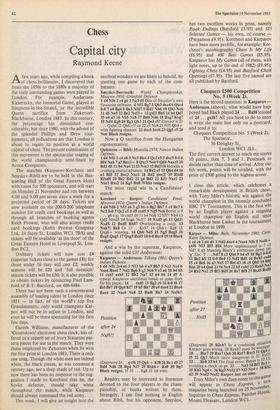 Afew years ago, while compiling a book of chess brilliancies, I discovered that from the 1850s to the 1880s a majority of the truly outstanding games were played in London. For example, Anderssen- Kieseritsky, the Immortal Game, played at Simpsons-in-the-Strand, or the incredible Queen sacrifice from Zukertort- Blackburne, London 1883. In this century, the percentage has diminished con- siderably, but since 1980, with the advent of the splendid Phillips and Drew tour- naments, all indications are that London is about to regain its position as a world capital of chess. The present culmination of this movement is the spectacular staging of the world championship semi-finals by Acorn Computers.

The matches (Kasparov-Korchnoi and Smyslov-Ribli) are to be held in the Ban- queting Hall of the Great Eastern Hotel with room for 500 spectators, and will start on Monday 21 November and run between 4.00 and 9.00 pm seven days a week for a projected period of 28 days. Tickets are now available on the 200-0-200 telephone number for credit card bookings as well as through all branches of booking agents Keith Prowse, who will also accept credit card bookings (Keith Prowse Company Ltd, 24 Store St, London WC1 7BA) and tickets will be available 'at the door' of the Great Eastern Hotel in Liverpool St, Lon- don EC2.

Ordinary tickets will now cost £4 (superior tickets close to the games £8); for those under 16 they will cost £2; weekly seasons will be £20 and 'full duration' season tickets will be £50. It is also possible to obtain tickets by contacting Paul Lam- ford of B.T. Batsford, on 486-8484.

There has not been such a concentrated assembly of leading talent in London since 1851 — in fact, of the world's top five Grandmasters, only world champion Kar- pov will not be in action in London, and even he will be there spectating for the first few days.

Gareth Williams, manufacturer of the 'Countdown* electronic chess clock, has of- fered us a superb set of ivory Staunton pat- tern pieces for use in the match. They were those employed by Zukertort when he won the first prize at London 1883. There is only one snag. Though the white men are indeed white, the black pieces, as was common a century ago, are a deep shade of red. Up to now there has been no response to the sug- gestion I made to Korchnoi that he, the Soviet defector, should take white throughout the match, while Kasparov should always command the red army.

This week, I will give an insight into the

cerebral wonders we are likely to behold, by quoting, one game by each of the com- batants.

Now a Q sacrifice from the Hungarian representative:

The most rapid win in a Candidates' match:

And a win by the superstar, Kasparov, against the solid Ulf Andersson:

Readers may be interested in literature devoted to the four players in the cham- pionship, or books written by them. Strangely, I can find nothing in English about Ribli, but his opponent, Smyslov,

Here is the second question: in Kasparov Andersson (above), what would have hap- pened had Black played 24 .. fixf6 instead of 24 ... gxf6? All you have to do to enter is write the main line only on a postcard, and send it to:

The first correct answer to reach me scores 10 points, then 7, 3 and 1. Postmark to decide rather than time of arrival. After our 6th week, points will be totalled, with the prize of £500 going to the highest scorer.

I close this article, which celebrates a remarkable development in British chess, with Tony Miles's historic win against the world champion in the recently concluded BBC TV Tournament. This is the first Will by an English player against a reigning world champion on English soil since Blackburne beat Lasker in the tournament at London in 1899.

Tony Miles's own deep notes to this game