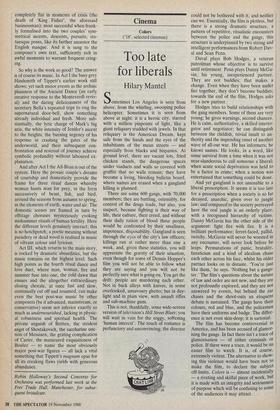 Too late for liberals

Sometimes Los Angeles is seen from above, from the whirling, swooping police helicopter. Sometimes it is seen from above at night: it is a heroic city, starred with a million pinpoints of light, like a giant reliquary studded with jewels. In that reliquary is the American Dream, kept safe from the hands and the eyes of the inhabitants of the mean streets — and especially from blacks and hispanics. At ground level, there are vacant lots, fried chicken stands, the dangerous spaces under viaducts and walls so covered with graffiti that no, walls remain; they have become a living, bleeding bulletin board, where names are erased when a gangland killing is planned.

There are some 600 gangs, with 70,000 members; they are battling, ostensibly, for control of the drugs trade, but also, you suspect, because fighting is their way of life, their culture, their creed, and without their daily ration of blood these people would be confronted by their smallness, impotence, disposability. Gangland is seen through the eyes of the city's law officers; killings run at rather more than one a week, and, given these statistics, you will appreciate the gravity of their situation, even though for some of Dennis Hopper's film you will not be able to follow what they are saying and you will not be perfectly sure what is going on. You get the drift: people are murdering each other. Not in back alleys with knives, in some overlooked, unsavoury ghetto; but in day- light and in plain view, with assault rifles and sub-machine guns.

This is not, thankfully, some wide-screen version of television's Hill Street Blues; you will wait in vain for the soggy, softening `human interest'. The touch of romance is perfunctory and unconvincing; the director could not be bothered with it, and neither can we. Essentially, the film is plotless, but there is a strong dramatic structure, a pattern of repetitive, ritualistic encounters between the police and the gangs; this structure is underpinned by two strong and intelligent performances from Robert Duv- al and Sean Penn.

Duval plays Bob Hodges, a veteran patrolman whose objective is to survive until retirement. Penn plays Danny McGa- vin, his young, inexperienced partner. They are not buddies; that makes a change. Even when they have been under, fire together, they don't become buddies; towards the end of the film, Hodges asks for a new partner.

Hodges tries to build relationships with the gang members. Some of them are very young; he gives warnings, second chances. He is calm, authoritative, a skilled interro- gator and negotiator; he can distinguish between the childish, trivial insult to au- thority and the impending onset of another wave of all-out war. He has informers; he knows names. He looks, in a word, like some survival from a time when it was not near-slanderous to call someone a liberal; when acute social deprivation was held to be a factor in crime; when a notion was entertained that something could be done.

And yet gangland is not amenable to a liberal prescription. It seems it is too late for a prescription when a society is so far decayed, anarchic, given over to jungle law; and compared to the society portrayed here the real jungle is an orderly place, with a recognised hierarchy of victims. Danny McGavin has the other side of the argument: fight fire with fire. It is a brilliant performance; ferret-faced, pallid, twitchy, McGavin will never be worsted in any encounter, will never look before he leaps. Permutations of panic, brutality, fanaticism and a kind of idealism chase each other across his face, whilst his older partner looks on in distaste. 'You're just like them,' he says. 'Nothing but a gangs- ter.' The film's questions about the nature of law and order are not new, and they are not profoundly explored, and they are not answered by events, but behind the car chases and the shoot-outs an eloquent debate is sustained. The gangs have their colours, red and blue, and the policemen have their uniforms and badge. The differ- ence is not even skin-deep; it is sartorial.

The film has become controversial in America, and has been accused of glamor- ising the gangs. In fact there isn't a trace of glamorisation — of either criminals or police. If there were a trace, it would be an easier film to watch. It is, of course, extremely violent. The alternative to show- ing this violence would have been not to make the film, to declare the subject off-limits. Colors is — almost incidentally a riveting and skilful piece of work, but it is made with an integrity and seriousness of purpose which will be confusing to some of the audiences it may attract.