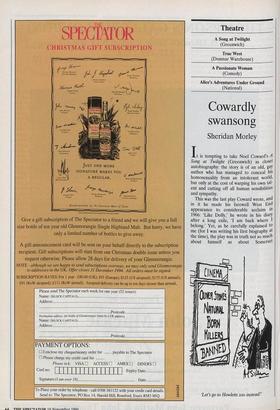 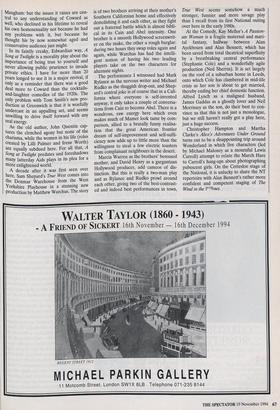 It is tempting to take Noel Coward's A Song at Twilight (Greenwich) as closet autobiography: the story is of an old, gay author who has managed to conceal Ins homosexuality from an intolerant world, but only at the cost of warping his own tal- ent and cutting off all human sensibilities and sympathy. This was the last play Coward wrote, and in it he made his farewell West End appearance to considerable acclaim in 1966: `Like Dolly,' he wrote in his diary after a long exile, 'I am back where I belong.' Yet, as he carefully explained to me (for I was writing his first biography at the time), the play was in truth not so much about himself as about Somerset `Let's go to Howletts zoo instead!' Maugham: but the issues it raises are cen- tral to any understanding of Coward as well, who declined in his lifetime to reveal his own homosexuality not because he had any problems with it, but because he thought his by now somewhat aged and conservative audience just might. In its faintly creaky, Edwardian way, A Song at Twilight is a morality play about the importance of being true to yourself and never allowing public prurience to invade private ethics. I have for more than 20 years longed to see it in a major revival, if only as a reminder that there was a good deal more to Coward than the cocktails- and-laughter comedies of the 1920s. The only problem with Tom Smith's new pro- duction at Greenwich is that it is woefully undercast in an appalling set, and seems unwilling to drive itself forward with any real energy. As the old author, John Quentin cap- tures the clenched agony but none of the charisma, while the women in his life (roles created by LiIli Palmer and Irene Worth) are equally subdued here. For all that, A Song at Twilight predates and foreshadows many latterday Aids plays in its plea for a more enlightened world. A decade after it was first seen over here, Sam Shepard's True West comes into the Donmar Warehouse from the West Yorkshire Playhouse in a stunning new production by Matthew Warchus. The story is of two brothers arriving at their mother's Southern Californian home and effectively demolishing it and each other, as they fight out a fraternal battle which is almost bibli- cal in its Cain and Abel intensity. One brother is a smooth Hollywood screenwrit- er on the make, the other a rough burglar: during two hours they swap roles again and again, while Warchus has had the intelli- gent notion of having his two leading players take on the two characters for alternate nights.

The performance I witnessed had Mark Rylance as the nervous writer and Michael Rudko as the thuggish drop-out, and Shep- ard's central joke is of course that in a Cali- fornia where everyone is self-invented anyway, it only takes a couple of conversa- tions from Cain to become Abel. There is a wondrous, raw energy here which even makes much of Mamet look tame by com- parison, allied to a brutally funny realisa- tion that the great American frontier dream of self-improvement and self-suffi- ciency now adds up to little more than the willingness to steal a few electric toasters from complaisant neighbours in the desert.

Marcia Warren as the brothers' bemused mother, and David Henry as a gargantuan Hollywood producer, add cameos of dis- tinction. But this is really a two-man play and as Rylance and Rudko prowl around each other, giving two of the best-contrast- ed and indeed best performances in town, True West seems somehow a much stronger, funnier and more savage play than I recall from its first National outing over here in the early 1980s.

At the Comedy, Kay Mellor's A Passion- ate Woman is a fragile maternal and mari- tal fantasy, halfway between Alan Ayckboum and Alan Bennett, which has been saved from total theatrical superfluity by a breathtaking central performance (Stephanie Cole) and a wonderfully agile production (Ned Sherrin). It is set largely on the roof of a suburban home in Leeds, onto which Cole has clambered in mid-life crisis as her son is about to get married, thereby ending her chief domestic function. Alfred Lynch as a maligned husband, James Gaddas as a ghostly lover and Neil Morrissey as the son, do their best to con- vince us that this is not just a monologue, but we still haven't really got a play here, just a huge success.

Christopher Hampton and Martha Clarke's Alice's Adventures Under Ground turns out to be a disappointing trip around Wonderland in which five characters (led by Michael Maloney as a mournful Lewis Carroll) attempt to relate the March Hare to Carroll's hang-ups about photographing pubescent girls. On the Cottesloe stage of the National, it is unlucky to share the NT repertoire with Alan Bennett's rather more confident and competent staging of The Wind in the 17"llows.