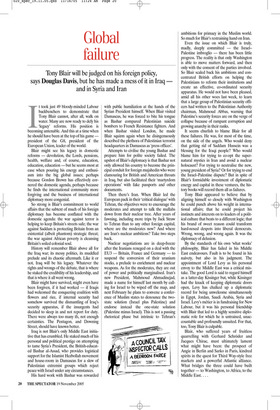 Tony Blair will be judged on his foreign policy, says Douglas Davis, but he has made a mess of it in Iraq and in Syria and Iran It took just 49 bloody-minded Labour backbenchers to demonstrate that Tony Blair cannot, after all, walk on water. Many are now ready to defy his ‘legacy’ reforms. His position is becoming untenable. And this at a time when he should have been at the top of his game president of the G8, president of the European Union, leader of the world.

Blair might see his legacy in domestic reforms — devolution, the Lords, pensions, health, welfare and, of course, education, education, education — but he seems most at ease when pouring his energy and enthusiasm into the big global issues; perhaps because Gordon Brown has effectively cornered the domestic agenda, perhaps because he finds the international community more forgiving and the business of international diplomacy more congenial.

So strong is Blair’s commitment to world affairs that the subtext of much of his foreign diplomacy has become conflated with the domestic agenda: the war against terror is helping to keep Britain’s streets safe; the war against Saddam is protecting Britain from an existential (albeit phantom) strategic threat; the war against African poverty is cleansing Britain’s soiled colonial soul.

History will remember Blair above all for the Iraq war; its messy politics, its muddled prelude and its chaotic aftermath. Like it or not, Iraq will be his legacy. Whatever the rights and wrongs of the debate, that is where he staked the credibility of his leadership, and that is where it all went wrong.

Blair might have survived, might even have been forgiven, if it had worked — if Iraqis had welcomed the conquering coalition with flowers and rice, if internal security had somehow survived the dismantling of Iraq’s security apparatus, if the insurgents had decided to sleep in and not report for duty. There were always too many ifs, not enough certainties. The Pentagon, and Downing Street, should have known better.

Iraq is not Blair’s only Middle East initiative that has crumbled. He staked much of his personal and political prestige on attempting to tame Syria’s President, the British-educated Bashar al-Assad, who provides logistical support for the Islamist Hezbollah movement and house-room in Damascus for a slew of Palestinian extremist groups which reject peace with Israel under any circumstances.

His hard work with Bashar was rewarded with public humiliation at the hands of the Syrian President himself. When Blair visited Damascus, he was forced to bite his tongue as Bashar compared Palestinian suicide bombers to French Resistance fighters. And when Bashar visited London, he made Blair squirm again when he disingenuously described the plethora of Palestinian terrorist headquarters in Damascus as ‘press offices’.

Attempts to civilise the young Bashar and prepare him for polite society failed. The upshot of Blair’s diplomacy is that Bashar not only allowed his country to become the principal conduit for foreign mujahedin who were clamouring for British and American throats in Iraq, but also facilitated their ‘martyrdom operations’ with fake passports and other documents.

Then there’s Iran. When Blair led the European pack in their ‘critical dialogue’ with Tehran, the objectives were to encourage the moderates and attempt to talk the mullahs down from their nuclear tree. After years of fawning, including more trips by Jack Straw to Tehran than to any other foreign capital, where are the moderates now? And where are Iran’s nuclear ambitions? Take two steps back.

Nuclear negotiations are in deep-freeze after the Iranians reneged on a deal with the EU3 — Britain, France and Germany — to suspend the conversion of their uranium stocks, a prelude to enrichment and nuclear weapons. As for the moderates, they are out of power and politically marginalised. Iran’s new President, Mahmoud Ahmadinejad, made a name for himself last month by calling for Israel to be wiped off the map, and next February he plans to convene a conference of Muslim states to denounce the twostate solution (Israel plus Palestine) and endorse instead the one-state solution (Palestine minus Israel). This is not a passing rhetorical phase but intrinsic to Tehran’s ambitions for primacy in the Muslim world. So much for Blair’s restraining hand on Iran.

Even the issue on which Blair is truly, madly, deeply committed — the Israel– Palestine imbroglio — there has been little progress. The reality is that only Washington is able to move matters forward, and then only with the consent of the parties involved. So Blair scaled back his ambitions and concentrated British efforts on helping the Palestinians to reform their institutions and create an effective, co-ordinated security apparatus. He would not have been pleased, amid all his other woes last week, to learn that a large group of Palestinian security officers had written to the Palestinian Authority chairman, Mahmoud Abbas, warning that Palestine’s security forces are on the verge of collapse because of rampant corruption and growing anarchy in their ranks.

It seems churlish to blame Blair for all these failures. He was, for most of the time, on the side of the angels. Who would deny that getting rid of Saddam Hussein was a blessing for the Iraqi people? Who would blame him for trying to co-opt the supernatural mystics in Iran and avoid a nuclear holocaust? For trying to neutralise the new, young president of Syria? Or for trying to end the Israel–Palestine dispute? But in spite of Blair’s formidable investment of diplomatic energy and capital in these ventures, the history books will record them all as failures.

Tony Blair appeared to believe that by aligning himself so closely with Washington he could punch above his weight in international affairs; that he could project his instincts and interests on to leaders of a political culture that beats to a different logic; that his brand of sweet reason could transform hard-nosed despots into liberal democrats. Wrong, wrong, and wrong again. It was the diplomacy of delusion.

By the standards of his own ‘what works’ philosophy, Blair has failed in his Middle East endeavours. Fault is to be found in his naivety, but also in his judgment. The appointment of Lord Levy as his personal envoy to the Middle East was a critical mistake. The good Lord is said to regard himself as a latter-day Kissinger but, while Kissinger had the knack of keeping diplomatic doors open, Levy has chalked up a diplomatic record for being unwelcome simultaneously in Egypt, Jordan, Saudi Arabia, Syria and Israel. Levy’s métier is in fundraising for New Labour, but it was his personal friendship with Blair that led to a highly sensitive diplomatic role for which he is untrained, unaccountable and profoundly unsuited. For that, too, Tony Blair is culpable.

Blair, who suffered years of fruitless quarrelling with Gerhard Schröder and Jacques Chirac, must ultimately lament what might have been: the prospect of Angie in Berlin and Sarko in Paris, kindred spirits in the quest for Third Way-style free markets and a powerful Atlantic alliance. What bridges the three could have built together — to Washington, to Africa, to the Middle East....