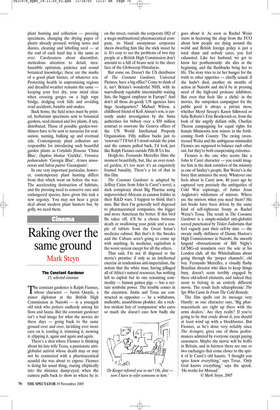 Raking over the same ground

The constant gardener is Ralph Fiennes, whose character — Justin Quayle, a minor diplomat at the British High Commission in Nairobi — is a youngish old stick who potters endlessly among his flora and fauna. But the constant gardener isn’t a bad image for what the movies do these days — going back to the same ground over and over, lavishing ever more care on it, tending it, trimming it, mowing it, clipping it, again and again and again.

There’s a shot where Fiennes is thinking about his late wife Tessa, a passionate antiglobalist activist whose death may or may not be connected with a pharmaceutical scandal she was about to expose. Fiennes is doing his usual thing, staring elliptically into the distance damp-eyed, when the camera pulls back to show us where he is: on the street, outside the corporate HQ of a mega-multinational pharmaceutical company, its bland anonymous corporate sheen dwarfing him like the stick insect he is. It’s easy to see the problems of two tiny people at a British High Commission don’t amount to a hill of beans next to the sheer face of the Globocorp Himalayas.

But come on. Doesn’t the US distributor of The Constant Gardener, Universal Pictures, have a big office? Come to think of it, isn’t Britain’s wonderful NHS, with its marvellously equitable interminable waiting lists, the biggest employer in Europe? And don’t all those do-goody UN agencies have huge headquarters? Michael Wilson, a childhood friend of Kofi Annan’s son, is currently under investigation by the Swiss authorities for bribery over a $50 million contract to renovate the Geneva offices of the UN World Intellectual Property Organisation. Fifty million bucks just to ‘renovate’? I’ll bet if I stood outside the joint and the camera pulled back, I’d look just like Ralph Fiennes outside Pills R Us Inc.

Heigh-ho. Fernando Meirelles films the moment beautifully, but, like an over-tended garden, it’s too neat: it’s an exquisitely framed banality. There’s a lot of that in this film.

The Constant Gardener is adapted by Jeffrey Caine from John le Carré’s novel, a dark conspiracy about Big Pharma using impoverished Africans as cannon fodder in their R&D wars. I happen to think that’s nuts. But then I’m generally well disposed to pharmaceutical companies, the bigger and more American the better. If this bird flu takes off, it’ll be a choice between death or swallowing your pride and a couple of tablets from the Great Satan’s medicine cabinet. But that’s it: the Swedes and the Cubans aren’t going to come up with anything. In medicine, capitalism is the worst system except for all the others.

That said, I’m not ill disposed to the movie’s premise: if only as an intellectual exercise in tendentious anti-imperialism, the notion that the white man, having pillaged all of Africa’s natural resources, has nothing left to exploit but its one remaining commodity — human guinea pigs — has a certain symbolic power. The trouble comes in the execution. Justin and Tessa are constructed as opposites — he a withdrawn, malleable, unambitious plodder, she a reckless strident fury of ‘compassion’ who cares so much she doesn’t care how badly she goes about it. As soon as Rachel Weisz starts in hectoring the chap from the FCO about how people are dying around the world and British foreign policy is just a total sham and nobody cares, you feel exhausted. Like her husband, we get to know her posthumously: she dies at the beginning, and the flashbacks bring her to life. The story tries to tie her hunger for the truth to other appetites — chiefly sexual: if she hadn’t died, another six months of action in Nairobi and she’d be in pressing need of the high-end protease inhibitors. But even that feels like a cliché: in the movies, the outspoken campaigner for the public good is always a private mess, whether Meryl Streep’s Karen Silkwood or Julia Roberts’s Erin Brockovich or, from the look of the angrily defiant stills, Charlize Theron campaigning for equal rights for female Minnesota iron miners in the forthcoming North Country. The raving raventressed Weisz and the ambiguous minimalist Fiennes are supposed to balance each other out, but they’re both exasperating extremes.

Fiennes is the one who seems like a John le Carré character — you could imagine him in the dark corridors of the ministry as one of Smiley’s people. But Weisz’s is the force that animates the story. Whatever one feels about le Carré now, 40 years ago he captured very precisely the ambiguities of Cold War espionage, of James Jesus Angleton’s wilderness of mirrors. Where are the mirrors when you need them? His last books have been driven by the same kind of self-righteous frenzy as Rachel Weisz’s Tessa. The result in The Constant Gardener is a simple-minded anti-globalist screed punctuated by Tinker-Tailorisms that feel vaguely past their sell-by date — the sweaty stuffy shiftiness of Danny Huston’s High Commissioner in Nairobi, the smooth languid obstructionism of Bill Nighy’s GCMG-ed mandarin over the sole at his London club, all the Whitehallisms about going through the ‘proper channels’, old boy. Fernando Meirelles, a visually flashy Brazilian director who likes to keep things busy, doesn’t seem terribly engaged by these old-school elements, and indeed they seem to belong in an entirely different movie. The result feels schizophrenic: The Spy Who Came In From The Cold Remedy.

The film spells out its message very bluntly: as one character says, ‘Big pharmaceuticals are right up there with the arms dealers.’ Are they really? If you’re going to be that crude about it, you should at least wind up with a blockbuster. But Fiennes, as he’s done very reliably since The Avengers, gives one of those performances admired by everyone except paying customers. Maybe the movie will be boffo in Britain, and in fairness there are one or two exchanges that come closer to the spirit of le Carré’s old haunts. ‘I thought you spies knew everything,’ says Tessa. ‘Only God knows everything,’ says the spook. ‘He works for Mossad.’