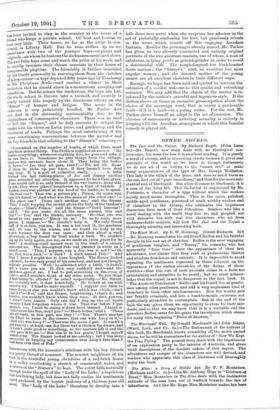 —Mr. Hornung resuscitates his old friend Raffles and his faithful disciple in his new set of sketches. Raffles is the most engaging of gentlemen burglars, and "Bunny," his comrade, who has apparently "done time" since the appearance of their last adventures, now claims that they rank as professional thieves and absolute free-lances and outcasts. It is impossible to avoid repeating the sentiments expressed in these columns on the appearance of the earlier chronicles of the doings of these worthies—that this sort of book presents crime in a form too entertaining and attractive to be moral ; but we must acknow- ledge that the sequel is not so dangerous as the first book. In "The Amateur Cracksman" Raffles and his friend live as gentle- men among other gentlemen, and add a very unpleasant kind of treachery to their other misdemeanours. Now the worthy pair are frankly criminals, and live a hand-to-mouth existence not particularly attractive to contemplate. But at the end of the book the war gives them an opportunity to atone for their mis- deeds, and so that we may know that it is a veritable end the graceless Raffles earns for his grave the inscription, which atones for many sins, beginning " Dalce et decorum."