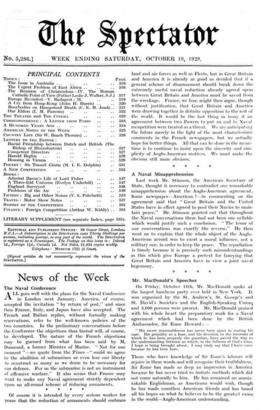 at the largest luncheon party ever held in New York. It was organized by the St. Andrew's, St. George's and St. David's Societies and the English-Speaking Union; and 5,000 persons were present. Mr. MacDonald praised with his whole heart the preparatory work for a Naval agreement which had been done by the British Ambassador, Sir Esme Howard :— .

" His sweet reasonableness has never been upset in stating his case. His geniality as a host, and his devotion to the interests of which he has been properly the guardian, have paved the way to the understanding betWeen us which, in the fullness of God's time, I hope is being brought about: I may truly say that I have come because he has been here.

Those who have knowledge of Sir Esme's labours will rejoice in these words and will recognize their truthfulness. Sir Esme has made so deep an impression in America because he has- never tried to imitate methods which did not 'come naturally to him. He has remained an unmis- takable Englishman, as Americans would wish, though he has made - countless American friends and has based all his hopes on what he believes to be the greatest cause in the world—Anglo-American understanding.