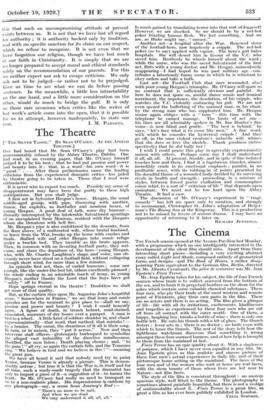 r THE SILVER TASSIE." BY SEAN O'CASEY. AT THE APOLLO THEATRE.] ONE had heard that Mr. Sean O'Casey's play had been unaccountably refused by the Abbey Theatre, Dublin. One ' bad read, in an evening paper, that Mr. O'Casey himself judged it to be his best ;,_ that he had put passion and power and beauty into it ; that, in a word—his own word—it is " great." . . . After these preliminaries came the leading criticisms from the .experienced dramatic critics—too jaded by, theatre going to be taken in. Those that I read were enthusiastic.

It is never wise to expect too much. Possibly my sense of disappointment may. have been due partly to these high anticipations. But you shall judge.

A first act in Sylvester Heegan's home. Heegan, the usual middle-aged gossip, with pipe, •discdssing with another, Simon, . the exploits, as footballer and amateur boxer, of young Heegan. ; A good deal of talk, some dry humour— dismally interrupted by the intolerable Salvationist spoutingi of an unexplained Susie Monican, resident with the Heegans whom she threatens with hell fire.

Mr. Heegan's pipe is also embittered by the descents, from the floor above, of a maltreated wife, whose brutal husband, on leave from the War; breaks up the home with crashes and thuds. Bullied wife and . elder Heegan take comic refuge under a truckle bed. They tremble as the brute appears. Then, in common with an invading football party, they wel- come, and cheer the departure of, the hero—young Heegan, who, with Mr. Charles Laughton's shape •and voice, 'can ob- viously never have stood on a football field, without collapsing through short wind, for more than a few minutes.

An episodic first act, then, of varied humours ' • some raw enough, like the under-the-bed bit,-others excellently phrased ; the whole ending in an admirable touch of irony, as young Heegan's mother thanks the Lord that the boys have got " safelY " Off to France: Hope -springs eternal in the theatre ! Doubtless we shall get more of that quality. But, as the curtain rises upon Mr. Augustus John's beautiful scene, " Soinewhere in France," we see that irony and comic episodes are for the moment to give place to—shall we say, passion and power and, beauty ? I wish I could honestly agree. A figure of death, in trench helmet, mud-stained, emaciated, murmurs of dry bones over a parapet. A man is tied to a wheel. A little knot of soldiers shudder in, and chant expressionistically—that word, that method, that mistake!— by a. brazier. The ennui, the dreariness of it all is their song. In turn, or in` unison, they " put it across." Now and then intervene staff officers—grotesquely burlesqued to symbolize the alleged . vast imbecility of the directive mindlessness. Huddled, the men listen ; Death playing chorus ; and, " to the guns ! 3' all cry, as again the curtain falls, and the Tommies sing, " We believe in God and we believe in thee ! "—meaning the great gun.

We have all heard it said that nobody need try to paint Venice, beeause Venice is already a Picture. This is demon- strably untrue ; but true it is that the War is, in itself and for all time, such a ready-made tragedy that the dramatist has

only to import a piece of suggestion of itto harass the heart. So Mi. O'Casey had really no need to transport us on to a non-realistic plane. His impressionism is outdone by any photograph—say, a scene from Journey's End:— " There's no more to •be said,

And when we are deed We 'may understand it all, all, all." Is much gained by translating terror into that sort of doggerel? However, we are shocked. So we should be by a red-hot poker frizzling human flesh. We feel something. And we are, as Blake might say, " uneasy."

Another act—a hospital after the War. Renewed story of the football-hero, now hopelessly a cripple. The red-hot poker. (so to say) applied with vigour. The hero's girl hates hospitals. She will desert him in favour of the V.C. who saved him. Restlessly he wheels himself about the ward ; while the nurse, who was the saved Salvationist of the first act, flirts with a young doctor, and Mr. Heegan, miraculously reappearing—I had hoped he was past military age—con- tributes a laboriously funny scene in which he is reluctant to obey orders and take a bath.

Last act—the Football Club that once resounded, alas ! with poor young Heegan's triumphs. Mr. O'Casey will spare us no contrast that is sufficiently obvious and painful. So here he does not spare us, amidst dance music and ironical merriment, the impotence, the desolation, of his cripple, who watches the V.C. violently embracing his girl. We are not even spared the buffetting of the maimed man, in his chair, by the strong man who has supplanted him. Mr. Heegan senior again obliges with a " turn "—this time with the telephone he cannot manage. The brute of act one— his lines are all admirably spoken in Mr. Ian Hunter's fine voice—is now blind and gentle. " The best is behind," he says, " let's face what is to come like men." A fine word, with which he consoles the hysterical cripple And they go off, as the once violent creature's imbecile wife whines that she does so love the ukulele. Thank goodness (retro- spectively) that he did bully her !

I wish I could praise this play in agreeably expressionistic unison with others. Perhaps some day I shall understand it all, all, all. At present, frankly, and in spite of fine isolated touches here and there, I find it a lugubrious blunder, almost incredibly crude in its emotional emphasis ; painful, in no profitable sense, with its rubbing-in of points presented by the dreadful theme of a wounded body derided by its surviving rivals in health and strength ; proceeding, in a mixture of styles, between forced poetic exaltation and commonplace comic relief, to a sort of criticism of life " that depends upon caricature. We must not be too hard upon the Abbey Theatre. It had a case.

The discussion of. Mr. O'Casey's experiment in " tragi- comedy " has left me space only to mention, and strongly to recommend, Christopher St. John's adaptation of Heifer. man's The Rising Sun at the Kingsway. This is a production not to be missed by lovers of serious drama. I may have an opportunity of returning to it later on.