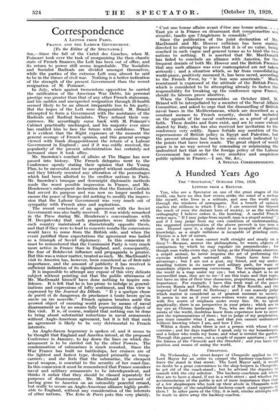 A LETTER FROM PARIS.

FRANCE AND THE LABOUR GOVERNMENT.

[To the Editor of the SPECTATOR.] SIR,—Since the fall of the Cartel des Gauehes, when M. Poincare took over the task of reorganizing the then chaotic state of French finances, the Left has been out of office, and its return to power still seems improbable. The Socialists and Socialist Radicals are divided amongst themselves, while the parties of the extreme Left may almost be said to be in the throes of civil war. Nothing is a better indication of the strength of the present Government than the recent resignation of M. Poincare.

In July, when against tremendous opposition he carried the ratification of the American War Debts, his personal prestige was greater than that of any other French statesman, and his sudden and unexpected resignation through ill-health seemed likely to be an almost irreparable loss to his party. But the hopes of the Left were disappointed. M. Briand attempted to form a Government with the assistance of the Radicals and Radical Socialists. They refused their con- currence. He accordingly came back with M. Poineare's Cabinet practically unchanged, and his majority ever since has enabled him to face the future with confidence. Thus it is evident that the Right expresses at the moment the general average of French opinion, and this general average viewed with frank disappointment the return of a Labour Government in England ; and if it was coldly received, the popularity of the present administration has certainly not increased since it took office.

Mr. Snowden's conduct of affairs at The Hague has now passed into history. The French delegates went to the Conference openly stating their opinion that the Young Plan, to be successful, must be accepted without modification, and they bitterly resented any alteration of the percentages which had been allotted to the creditor nations in Paris. Mr. Snowden's brusque and downright diplomatic methods made the worst possible impression in France, and Mr. Henderson's subsequent declaration that the Entente Cordiale had served its purpose and was now no longer needed to ensure the peace of Europe did nothing to modify the impres- sion that the Labour Government was very much out of sympathy with French aims and aspirations.

The recent conclusion of an agreement with the Soviet Government was also badly received. It was widely remarked in the Press during Mr. Henderson's conversations with M. Dovgalevsky that such pourparlers were futile while each country maintained a diametrically opposite thesis, and that if they were to lead to concrete results the concessions would have to come from the British side, and when the event justified these expectations the agreement was hailed as a triumph of Soviet diplomacy. In this connexion it must be remembered that the Communist Party is very much more active in France than in England, and, consequently, the fear of Bolshevist influence and propaganda is greater. But this was a minor matter, treated as such. Mr. MacDonald's visit to America has, however, been considered as of first-rate importance, and the amount of publicity it has received is sufficient indication of its significance in French eyes. It is impossible to attempt any exposé of this very delicate

subject without pointing out that the public utterances of Mr. MacDonald himself have done nothing to inspire con- fidence. It is felt that he is too prone to indulge in general- izations and expressions of lofty sentiment, and this view -is expressed by the Journal des Debuts. " y a quelque chose de Fiera et de dangereux de proclamer a toute heure qu'on ouvre un ere nouvelle." French opinion brushes aside the avowed object of ensuring world peace by means of naval disarmament as by no means fully representing the object of this visit. It is, of course, realized that nothing can be done to bring about substantial reductions in naval armaments without Anglo-American agreement, but it is felt that such an agreement is likely to be very detrimental to French interests.

An Anglo-Saxon hegemony is spoken of, and it seems to

be thought that England and America intend, at the proposed Conference in January, to lay down the lines on which dis- armament is to be carried out by the other Powers. The condemnation of submarines is much resented. Since the War France has built no battleships, her cruisers are of the lightest and fastest type, designed primarily as troop- carriers ; and she feels that the submarine, the cheapest naval weapon, is essential to the security of her coast-line. In this connexion it must be remembered that France considers naval and military armaments to be interdependent, and thinks it unfair that they should be classed separately for purposes of disarmament. Mr. MacDonald is accused of having gone to America on an ostensibly peaceful errand, but really to secure an Anglo-American alliance highly profit- able to England, without any consideration of the interests of other nations. The Echo de Paris puts this very plainly.

Since the publication of the joint declaration of Mr. MacDonald and Mr. Hoover criticism has been mainly directed to attempting to prove that it is of no value, being couched in such vague and general terms as to bind the two nations to nothing. It is asserted that Mr. MacDonald has failed to conclude an alliance with America, for the frequent denials of both Mr. Hoover and the British Premier that any such alliance was ever contemplated are not taken seriously ; and a situation which, so far from consolidating world-peace, positively menaced it, has been saved, according to the French Press, by " le bon sens americain." Much resentment is expressed at the attitude of the British Press, which is considered to be attempting already to fasten the responsibility for breaking up the conference upon France, should its labours prove abortive.

When the Chamber reassembles on October 23rd, M. Briand will be interpellated by a member of the Naval Affairs Committee, and asked to urge that the dismantrmg of British naval bases in the Mediterranean, which are described as a constant menace to French security, should be included on the agenda of the naval conference, as a proof-of good faith. These doubts and fears exist, and• are to some extent shared by Italy, who has also received her invitation to the conference very coldly. Space forbids any mention of the repercussions of British policy in Egypt and Palestine, but the present situation has been to some extent indicated by the points that have been made. The- great object of -world peace is in no way served by concealing or minimizing the undoubted fact that so far the foreign policy of the Labour Government has created a very sensitive and suspicious public opinion in France.—I am, Sir, &c.. A SPECIAL CORRESPONDENT.