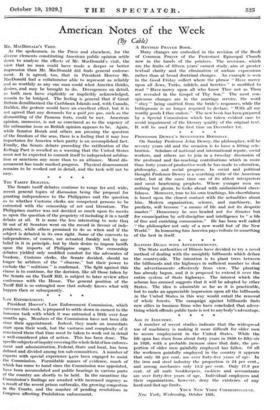 American Notes of the Week

As the spokesmen, in the Press and elsewhere, for the diverse elements constituting American public opinion settle down to analyze the effects of Mr. MacDonald's visit, the view that no man could have made a deeper or better impression than Mr. MacDonald did finds general endorse- ment. It is agreed, too, that in President Hoover Mr. MacDonald had a collaborator able to represent as reliably and as worthily, as any one man could what America thinks, desires, and may be brought to do. Divergences on detail, as both men have explicitly or implicitly acknowledged, remain to be bridged. The feeling is general that if Great Britain demilitarized the. Caribbean Islands and, with Canada, Halifax, the gesture would have an excellent effect, but it is not agreed that any demands for a quid pro quo, such as the dismantling of the Panama forts, could be niet. American opinion; moreover, is not so convinced as to the urgency of the submarine issue as British opinion appears to be. Again, while Senator Borah and others are pressing the question of the freedom, of the seas, there is a feeling that it may lose importance for America when parity is an accomplished fact. Finally, the Senate debate preceding the ratification of the Kellogg Pact is recalled as a warning that the United States must not be expected to commit itself to independent arbitra- tion or sanctions any more than to an alliance. Moral dis- armament has made marked progress. Physical disarmament remains to be worked out in detail, and the task will not be