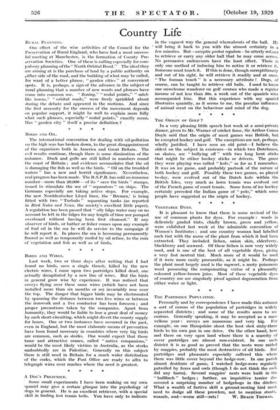 The international convention for dealing with oil-pollution on the high seas has broken down, to the great disappointment of the organizers both in America and Great Britain. The evil results continue, though there is some diminution of the nuisance. Duck and gulls are still killed in numbers round the coast of Britain ; and evidence accumulates that the oil is damaging the fish as well as the birds. " Oil on the troubled waters " has a new and horrid significance. Nevertheless, real progress has been made. The R.S.P.B. has sold an immense number—more than 20,000— of its " save the birds " stamps, issued to stimulate the use of " separators " on ships. The Germans especially are taking active steps. For example, the new Norddeutscher Lloyd liner, the ' Bremen,' is being fitted with two " Turbulo " separating tanks (as reported in Bird Notes and News, the society's excellent little paper). A regulation has been passed that " oily bilge water may on no account be left in the bilges for any length of time nor pumped overboard without having been first cleansed." If any observer of birds, or bather or fisher comes upon any example of foul oil in the sea he will do service to the campaign if he will report it. In places the sea is becoming permanently floored as well as temporarily roofed by oil refuse, to the ruin of vegetation and fish as well as of birds.