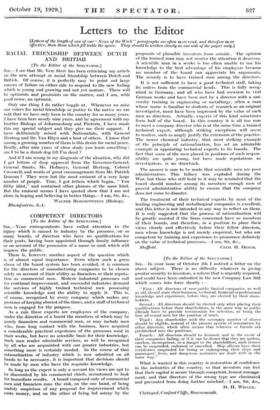 [Letters of the length of one of our" News of the Week" paragraphs are often m7re read, and therefore Inns effective, than those which fill treble the space. They should be written clearly on one side of the paper only.]

RACIAL FRIENDSHIP BETWEEN DUTCH AND BRITISH

Sup—I see that Mr. Vere Stert has been criticizing my article on the new attempt at racial friendship between Dutch and British. Of course, it is perfectly easy to point out large masses of failure on either side to respond to the new feeling which is young and growing and not yet mature. There will be optimists and pessimists on the matter, and I am, with good cause, an optimist.

Only one thing I do rather boggle at. Whenever we raise our voices for racial friendship or justice to the native we are told that we have only been in the country for so many years. I have been here nearly nine years, and by agreement with my brother Bishops of Johannesburg and Pretoria, I have made this my special subject and they give me their support. I have deliberately mixed with Nationalists, with General Hertzog and Dr. Van Rhyn and a host of others. I know that among a growing number of them is this desire for racial peace. Really, after nine years of close study you learn something : am I to be a dumb dog till I'm dead ?

And if I am wrong in my diagnosis of the situation, why did I get letters of deep approval from the Governor-General, General Smuts, Mr. Hofmeyr, General Hertzog, Colonel Cresswell, and words of great encouragement from Mr. Patrick Duncan ? They were but the most eminent of a very large number of people. True, I -got letters which began, " You filthy idiot," and contained other phrases of the same kind. But the eminent names I have- quoted show that I am not alone in hoping and believing in better things.—I am, Sir, &c.,