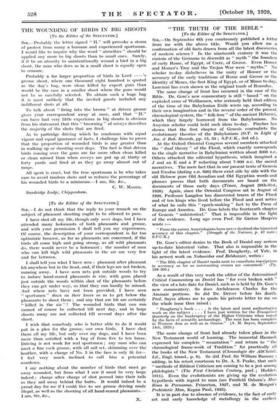 THE WOUNDING OF BIRDS IN BIG SHOOTS

[To the Editor of the SPECTATOR.] SIR,—Probably the letter signed " H." will provoke a storm of protest from many a humane and experienced sportsman. I would like to inquire why the word atrocities should be applied any more to big shoots than to small ones. Surely, if it be an atrocity to unintentionally wound a bird in a big shoot, the man who does so in a small shoot is equally open to censure.

Probably a far larger proportion of birds in Lord —'s grouse shoot, where one thousand eight hundred is quoted as the day's bag, were clean killed by expert guns than would be the case in a smaller shoot where the guns would not be so carefully selected. To obtain such a huge bag it is most unlikely that the invited guests included any indifferent shots at all.

To talk about " firing into the brown " at driven grouse gives your correspondent away at once, and that " H." can have had very little experience in big shoots is obvious from his statement that this " browning " of coveys describes the majority of the shots that are fired.

As to partridge driving which he condemns with equal vigour and equal ignorance of facts, I challenge him to prove that the proportion of wounded birds is any greater than in walking up or shooting over dogs. The fact is that driven birds coming over the guns are far more often clean killed or clean missed than when coveys are put up at thirty or forty yards and fired at as they go away almost out of range.

All sport is cruel, but the true sportsman is he who takes care to avoid random shots and so reduces the percentage of his wounded birds to a minimum.—I am, Sir, &c.,