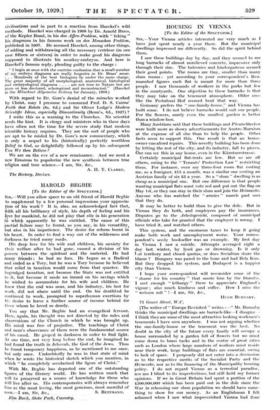 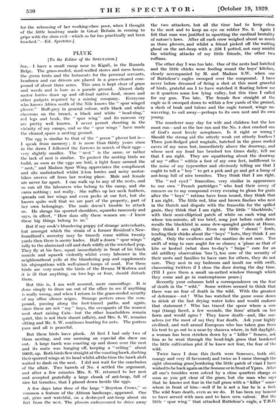 HOUSING IN VIENNA [To the Editor of the SPECTATOR.]

SIR,—Your Vienna articles interested me very much as I have just spent nearly a year there. But the municipal dwellings impressed me differently. So did the spirit behind them.

I saw these buildings day by day, and they seemed to me long barracks of almost unrelieved concrete, impressive only through their size. The balconies and kindergartens seemed their good points. The rooms are tiny, smaller than many slum rooms : yet according to your correspondent's Reu- mannhof figures each flat is meant for more than three people. I saw thousands of workers in the parks but few in the courtyards. One objection to these barracks is that they may take on the tenement atmosphere. Older ones like the Pestalozzi Hof seemed bent that way.

Germany prefers the " one-family-house," and Vienna has built some. I do not believe barracks would suit our people. For the flowers, surely even the smallest garden is better than a window-box.

Many Austrians said that these buildings and Plautschbecken were built more as showy advertisements for Austro-Marxism at the expense of all else than to help the people. Other facts seem to support this. One result is that no house- owner can afford repairs. This novelty building has been done by letting the rest of the city, and its industry, fall to pieces. brie can see this in any house, even in the Kiirntnerstrasse.

Certainly municipal flat-rents are low. But so are all others, owing to the " Tenants' Protection Law " restricting them. For instance, over my three-four room flat costing me, as a foreigner, £15 a month, was a similar one costing an Austrian family of six £3 a year. So a "slum " dwelling is as cheap as a municipal one. But one difference is that people wanting municipal flats must vote red and put out the flag on May 1st, or they can stay in their slum and join the Heimwehr. Anyone who has watched the " armies " march past sees that they do.

It may be better to build than to give the dole. But in Vienna they do both, and employers pay the insurances. Disputes go to the Arbeitsgericht, composed of municipal officials who take for granted that the employer is wrong. I have tried it, and watched others.

This system, and the enormous taxes to keep it going make both work and unemployment worse. Your corres- pondent's seedy bookseller was an example. My first day in Vienna I saw a suicide. Attempts averaged eight a day last winter, by lysol gas or drowning. Is it only list territory and closed quotas, or does Socialism share the blame ? Hungary was pared to the bone and had Bela Kun. But they dropped his system, and Budapest is a happier city than Vienna.

I hope your correspondent will reconsider some of the " shame for his country " that smote him by the Danube. I met enough " lethargy " there to appreciate England's vigour ; also much kindness and coffee. How I miss the

[The writer of " Europe Revisited " writes :—" Mr. Burnaby thinks the municipal dwellings are barrack-like--I disagree – I think they are some of the most attractive looking workmen's tenements I have seen anywhere. I was not arguing whether the one-family-house or the tenement was the best. No doubt in the city of the future every family will occupy a house surrounded by a garden full of flowers but we must come down to brass tacks and in the centre of great cities such as London where large numbers of workers must reside near their work, large buildings of flats are essential, owing to lack of space. I purposely did not enter into a discussion as to the respective merits of the Socialist Party and the Heimwehr, nor as to the financing of the Municipality housing policy. I do not regard Vienna as a terrestial paradise, nor am I blind to its imperfections, but still hold my former opinions. If we in Great Britain had spent a portion of the £500,000,000 which has been paid out in the dole since the War in rehousing our slum population we should have some- thing to show for our money. As an Englishman I felt ashamed when I saw what impoverished Vienna had done for the rehousing of her working-class poor, when I thought of the little headway made in Great Britain in coming to grips with the slum evil—which so far has practically not been touched."—Ed. Spectator.]