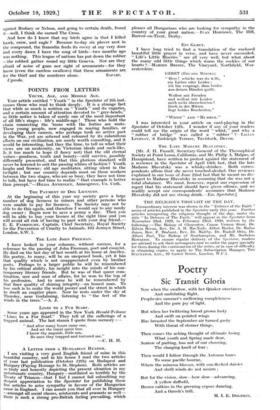 Your article entitled " Youth " in the Spectator of 5th inst. causes those who read to think deeply. It is a strange fact that while so much is written on " Youth " and its vagaries, and a certain amount of attention devoted to " grey-heads," so little notice is taken of surely one of the most important of all life's stages : life's middle-age ! Those who hold the chain connecting the 'teens with the forties are mute. These young people, now engaged in rearing families, or developing their careers, who perhaps took no active part in the War, yet are sobered and coloured by its calamitous effects on our civilization, are surely worth consulting, and it would be interesting, had they the time, to tell us what their views are on modernity, on Victorian ideals and such-like. Is it too much to hope (I fancy not) that the old eternal values—goodness, truth and beauty—still survive, possibly differently presented, and that_ this glorious standard will never be lowered to suit the passing whims of fashion ? Youth laughs and frowns; old age meditates, sitting silent in the twilight ; but our country depends most on those workers between the two stages, who are so busy, they have not time to talk, but have had time to realize " that example is better than precept."—HILDA ANNESLEY, Annesgrove, Co. Cork.

THE PAYMENT OF DOG LICENCES.

At the beginning of this year my society- gave a large number of dog licences to miners and other persons who were unable to pay for licences. The Society may not be able to do this again, and therefore I would say to any needy dog owner : Begin now to save a penny a day. Then you will be able to buy your licence at the right time and you will avoid all risk of having to part with your dog friend.— E. E. FAIRHOLME, Captain, Chief Secretary, Royal Society for the Prevention of Cruelty to Animals, 105 Jermyn Street, London, S.W. 1.

I have looked in your columns, without success, for a reference 'to the passing of John Freeman, poet and essayist. He died on the last day of last month at his home at Anerley. His poetry, to many, will be an unopened book, yet it has that quality which is not unappreciated even by brother poets. Perhaps to a larger public he will be remembered by his critical ability, his insight into the minds of his con- temporary literary friends. But he was of that queer com- bination, seer and man of affairs, for he won to the top of his profession. And to some he will be remembered by that finer quality of shining integrity—an honest man. To lose such is to make the world poorer and the • street in which he dwelt an emptier place. Now he rests under the sky at Thursley, near Godalming, listening to " the feet of the winds in the trees."—A. J.

LINES TO A FUR SCARF.

Some years ago appeared in the New York Herald-Tribune " Lines to a Fur Scarf." They tell of the sufferings of a trapped animal. The last stanza I quote from memory :—

" And after many hours came one, And set the timid spirit free.

I know thy anguish, little son, So once they trapped and tortured me."

A LETTER FROM A HUNGARIAN READER.

I am visiting a very good English friend of mine in this beautiful country, and in his house I read the two articles of your last publication (October 12th) on Budapest and Hungary (Paying Homage to St. Stephen). Both articles are so truly and honestly depicting the present situation in my unfortunate country, Hungary—mutilated so terribly by the Treaty of Trianon—that I feel I cannot fail submitting my deepest appreCiation to the Spectator for publishing these fine articles to arise sympathy in favour of the Hungarian Cause in England. I can assure you that all over in Hungary —amongst all social classes, aristocrats and peasants as well— there is such a Strong pro-British feeling prevailing, which

pleases all Hungarians who are looking for sympathy in the country of your. great nation.—IVAN HORDOSY, The Hill, Barrow-on-Trent, Derby.

I have long tried to find a translation of the enclosed beautiful little prayer in verse, and have never succeeded. " Life's Little Miseries " are all very well, but what about the many odd little things which warm the cockles of our hearts ?—MARION BRIDLE, The Vineyard, Northfield, Wor- cestershire.

I was interested in your article on card-playing in the Spectator of October 12th. I wonder if any of your readers could tell me the origin of the word " whist," and why a " rubber of bridge " was called a " rubber " ?—LILIAN LINDSAY, 8 Endsleigh Terrace, Tavistock, Devon.

[Mr. J. H. Fussell, Secretary-General of the Theosophical Society at Point Loma, California, and Mr. Philip A. Malpas, of Hampstead, have written to protest against the statement of a reviewer in the Spectator of April 13th last, that the late Madame Blavatsky was a whisky-drinker. Both corres- pondents affirm that she never touched alcohol. Our reviewer explained in our issue of June 22nd last that he meant no dis- respect to Madame Blavatsky in assuming that she was not a total abstainer. We must, however, repeat our expression of regret that his statement should have given offence, and we readily accept our correspondents' assurance that Madame Blavatsky did not use strong drink.--En. Spectator.]