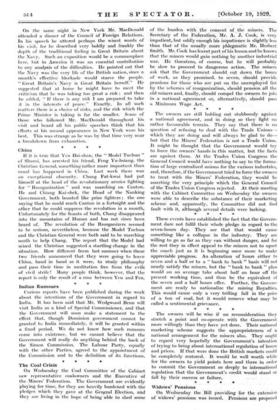 Page 2, 19 October 1929 — These events have established the fact that the Govern- ment
Close

These events have established the fact that the Govern- ment

dare not fulfil their whole pledge in regard to the seven-hours day. They see that that would cause something like a collapse in the industry. They are willing to go as far as they can without danger, and for the rest they in effect appeal to the miners not to upset the coach just as it is beginning once more to make appreciable progress. An alteration of hours either to seven and a half or to a " bank to bank " basis will not nearly satisfy the miners, but the " bank to bank " plan would on an average take about half an hour off the present working time, and thus be the equivalent of the seven and a half hours offer. Further, the Govern- ment are ready to nationalize the mining Royalties. This would cause only a very trifling fall in the price of a ton of coal, but it would remove what may be called a sentimental grievance.