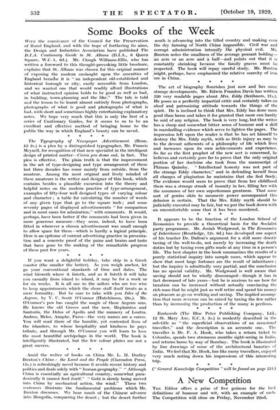 just now and has some strange developments. Mr. Edwin Frandon Davis has written 520 very readable pages about Mrs. Eddy (Scribners, 21s.). He poses as a perfectly impartial critic and certainly takes an aloof and patronizing attitude towards the things of the spirit. He is inclined to think that Mrs. Eddy has done more good than harm and takes it for granted that more can hardly be said of any religion. The book is very long, but the writer has a sharp and somewhat bitter sense of humour and a skill in marshalling evidence which serve to lighten the pages. The impression left upon the reader is that he has set himself to destroy the Mrs. Eddy myth, with as little injury as may be to the devout adherents of a philosophy of life which lives and increases upon its own achievements and experience. So far as the first prophet of the new sect is concerned, he believes and certainly goes far to prove that the only original Portion of her doctrine she took from the manuscript of Phineas Quimby. " Intellectual honesty was not part of the strange Eddy character," and in defending herself from all charges of plagiarism he maintains that she lied freely. The evidence would seem to prove that from her childhood there was a strange streak of insanity in her, filling her with the assurance of her own superhuman greatness. That some sort of genius akin to mesmeric power accompanied this delusion is certain. That the Mrs. Eddy myth should be judicially executed may be fair, but we put the book down with an uncomfortable sense that it has been murdered.