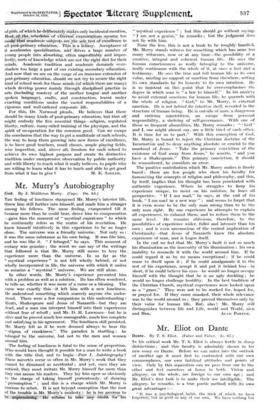 THE feeling of loneliness sharpened Mr. Murry's interior life, threw him still further into himself, and made him a stranger among his fellows. The same feeling, exasperated till it _ became more than he could bear, drove him to compensation —gave him the moment- of " mystical experience " to which he continually refers as the centre of his revelation. He knew himself intuitively in this experience to be no longer: alone. The universe was a friendly universe. Not only so : it was the same substance as his own being. It was like him, and he was like It. " I belonged," he says. This moment of ecstasy was genuine ; the worst we can say of the writings that followed is that Mr. Murry still seems to love the , experience more than the universe. In so far as the " mystical experience " is not left wholly behind, or not wholly incorporated in life, the universe with which it unites us remains a " mystical " universe. We are still alone.

In other words, Mr. Muriy's experience presented him with a problem as well as a solution. He has often wondered, he tells us, whether it was more of a curse or a blessing. The curse was exactly this—it left him with a new loneliness. He understood something which scarcely anyone else under- stood. There were a few companions in this understanding : Keats, Shakespeare and Jesus of' Nazareth—but they are dead, and a man can interpret himself into their' experiences without fear of rebuff ; and Mr. D. H. Lawrence—but he is alive and he proved much less manageable, much less complete and satisfying in his agreement. The loneliness still persisted. Mr. Murry felt as if he were doomed always to bear the

stigma of crankiness." The paradox is startling : he belonged to the universe, but not to the men and women around him. - - The feeling of loneliness• is fatal to-the sense of proportion. Who would have thought it possible for a man to write a book with the title God, and to begin—Part I, Autobiography ? These naivetes occur so often. in Mr. Murry's work that they cannot be diSmissed as accidental ; and .yet, once they are noticed, they must irritate Mr. Murry himself far more than they can amuse his readers. They lay him open so obviously to the charge of taking himself portentously, of showing presumption " ; and this is a charge which Mr. Murry is anxious to rebut. It is not beyond conception that the root of the trouble is ,Mr.. Murry's modesty: he is too anxious to ii-...itriiresirming. lie refit-ries-10 ."`-erecT`ic-IiTf-tis " mystical experience " ; but this should go without saying. " I am not a genhis," he re- marks ; bit the judgment does not lie with hiM.

None the less, this is not a book to be roughly handled. Mr. Murry stands witness for something which has none-too many witnesses, now or at any time—the possibility of a creative, integral and coherent human life. He sees the human consciousness as really belonging to the universe, really continuous with the whole of it, at once a fact and a testimony. He sees the true and full human life as its own value, needing no support or sanction from elsewhere, setting its own standards by its honesty to its own. intuition. He is so insistent on this point that he over-emphasises the degree in which man is " a law to himself." - In his anxiety to avoid external sanctions for human life, he quarrels with the whole of religion. " God," to Mr. Murry, is external sanction. He is not behind the intuition itself, revealed in the structure of human being. He is outside of man, a dangerous and enticing superstition, an escape from personal responsibility, a shelving of self-governance. With one of those so frequent absurdities, Mr. Murry remarks " ' God' and I, one might almost say, are a little tired of each other. It is time for us to part." With this conception of God, Mr. Murry is bound to reject the Christian doctrine of the Incarnation and to deny anything absolute or crucial to the manhood of Jesus. " Take the primary conviction of the existence of God away from Jesus," he asserts, " and you have a Shakespeare." This primary conviction, it should be remembered, he .considers an error. _ The positive contribution which Mr. Murry makes is firmly based : there are few people who show his faculty for humanizing the concepts of religion and philosophy, and this, by itself, implies that his thought has been penetrated with authentic experience. Where he struggles to keep his experience unique, to insist on his isolation, he loses all perspective. " If I am mad," he says, at the end of -his book, " I am mad in a new way " ; and seems to forget that it is even worse to be the only man wrong than to be the only man right. By one experience he attempts to explain all experiences, to exhaust them, and to reduce them to the same level. He remains oblivious, therefore, to the pOssibilities of experience wider, fuller and intenser than his own ; and is even unconscious of the central implication of Christianity—that Jesus of Nazareth knew the absolute experience of man, and is Logos itself.

In the end we feel -that Mr. Murry's fault is not so much his illumination as the insecurity of his illumination : his own inability to reconcile it with the world around him. If he could regard it as by no means exceptional ; if he could cease to dwell upon it ; if he could amalgamate it to the rest of his experience, accept it and put it behind him—in short, if he could believe his eyes—he would no longer occupy himself with the thought that he is an ugly duckling ; he would no longer challenge hostility. In the best tradition of the Christian Church, mystical experiences were looked upon as a " grace." They were not to be worked for, hoped for, or prayed for. If they came unasked, their whole relevance was to the world around us ; tjiey proved themselves only by their value for human life. But, alas ! Mr. Murry still distinguishes between life and Life, world and World, Men