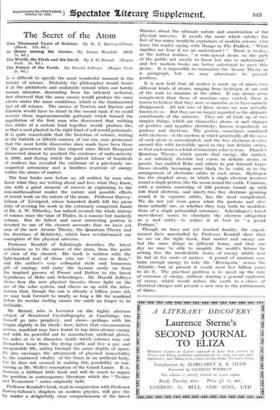 The Secret of the Atom

Two Thousand Years of Science. By R. J. Harvey-Gibson. (Black. 12s. 6d.) The Future of the Earth. By Harold Jeffreys. (Kegan Paul. 2s. 6d.) Ir is difficult to specify the most wonderful moment in the history of science. Probably the philosopher would locate it at the prehistoric and undatable instant when our hardly human ancestor, descending from his arboreal seclusion, first observed that the same causes would produce the same effects under the same conditions, which is the fundamental fact of all science. The names of Newton and Darwin and Einstein would have to stand in the second rank if we could recover those unpronounceable gutturals which formed the appellation of the first man who discovered that rubbing two sticks of a certain kind together would produce fire, or that a seed planted in the right kind of soil would germinate.

It is quite conceivable that the historian of science, writing in the fortieth or fiftieth century of our era, may pronounce that the most fertile discoveries since made have been those of the generation which has elapsed since Henri Becquerel discovered almost by accident the existence of radio-activity in 1896, and• during which the patient labour of hundreds of workers has revealed the existence of a previously un- suspected astronomy and a limitless reservoir of energy within the atoms of matter.

The four books now before us, all written by men who know what they are writing about and love what they know, aim with a great measure of success at explaining to the non-mathematical reader the nature and possible effects

of recent work on the nature of the atom. Professor Harvey- Gibson of Liverpool, whose lamented death left the pious duty of revising his work in the extremely competent hands of Dr. A. W: Titherley, has indeed covered the whole history'

of science since the time of Thales, in a concise but masterly volume. But its fullest and most interesting portion is devoted to one of the clearest accounts that we have yet seen of the new Atomic Theory, the Quantum Theory and the doctrines of Relativity, which have revolutionized our conception of the physical universe.

Professor Kendall of Edinburgh describes the latest conclusions as to the nature of the atom, from the point of view of the chemist. His book is written with the light-hearted zeal of those who are " at ease in Zion," and the author's very colloquial style and humorous gift of analogy will carry the layman easily on from the inspired guesses of Proust and Dalton to the latest hypotheses of Bohr and Sehrodinger. Dr. Harold Jeffreys shows how the new physical theories throw light on the age of the solar system, and cheers us up with the infor- mation that, though the sun is already a billion years old, we may look forward to nearly as long a life for mankind before its secular cooling causes the earth no longer to be habitable.

Mr. Bernal, who is Lecturer on the highly abstruse subject of Structural Crystallography at Cdmbridge, lets himself go into prophecy, and shows—perhaps with his'

tongue slightly in his cheek---how, before that consummation arrives, mankind may have learnt to tap intra-atomic energy and with its powerful aid to' manufacture artificial globes, ten miles or so in diameter, inside which colonies may cut themselves loose from the dying earth and live a gay and irresponsible life, sailing through the azure depths of space.

He also envisages the attainment of physical immortality by the continued vitality of the brain in an artificial body, but he does not succeed in making this possibility so con- vincing as Mr. Wells's conception of the Grand Lunar. It is,

however, a brilliant little book and will do much to regain the position .in -contemporary- literature which the " To-day and To-morrow " series originally held.

Harvey-Gibson's chapters on modern physics, will give the lay reader a delightfully clear comprehension of the latest' theories about the ultimate nature and construction of the physical universe. It avoids the snare which catches the feet Of too many would-be explainers of modern science, who leave the. reader saying with Mungo in The Padlock, " What signifies me hear if me no understand ? " There is to-day, as the author realizes, " a wide-spread desire on the part of the public not merely to know but also to understand," and few modern books are better calculated to meet this desire. It is impossible to summarize the Atomic Theory in a paragraph, but we may adumbrate its present position.

It is now held that all matter is made up of ninety-two different kinds of atoms, ranging from hydrogen at one end of the scale to uranium at the other. If any atoms more complicated than those of uranium once existed, there is reason to believe that they were so unstable as to have entirely disappeared. All but two of these atoms are now actually known to us. But they are no longer regarded as the ultimate constituents of the universe. They are all built up of two simpler things, which are themselVes atoms or unit charges of positive and negative electricity, known respectively as protons and electrons. The proton—sometimes combined with electrons—is the nucleus in which practically all the mass of each atom is concentrated, and the free electrons revolve around this with incredible speed in tiny but definite orbits, so that each atom is a kind of miniature solar system. Planck's Quantum Theory, which asserts that energy, like matter, is not infinitely divisible but exists in definite atoms or

quanta, has enabled Bohr and others to put forward hypo- theses steadily becoming more likely to be valid, as to the

arrangement of electronic orbits in each atom. Hydrogen has the simplest atom, in which a single electron revolves round a single proton, like the moon round the earth. Uranium, with a nucleus consisting of 238 protons bound up with 146 fixed electrons, and ninety-two free electrons gyrating round it in separate orbits, has the most complicated.

We do not yet even - guess what the protons and elec- trons actually are, or whether they may both be modifica- tions of a single primordial substance. Schrodinger's latest wave-theory seems to eliminate the electron altogether as a real entity—to reduce it at best to "a grand Perhaps."

Though we have not yet reached finality, the experi- mental facts marshalled by Professor Kendall show that we are on the right track, that matter and energy are but the same things in different forms, and that one day we may be able to simplify the world's labour by setting free the incalculable stores of energy which now lie hid at the roots of matter. A pound of uranium con- tains enough energy to take the Berengaria ' across the Atlantic—but at present it would need five billion years

to do it. The practical problem is to speed up the rate of emission of energy, without starting a general explosion of atoms, which would reduce the earth to a chaos of electrical charges and present a new star to the astronomers of Sirius.