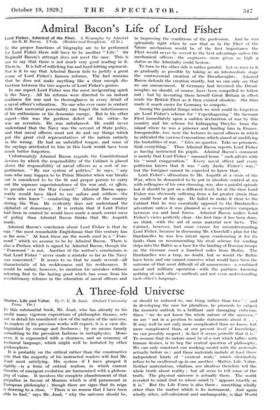 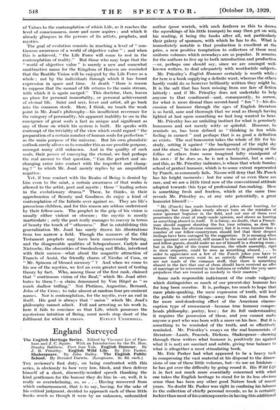 A Three-fold Universe IN this substantial book, Mr. Joad, who

has already to his credit many vigorous expositions of philosophic_ themes, sets out in detail his considered view of the nature of the universe. As readers of his previous works will expect, it is a view dis- tinguished by courage and freshness ; by no means tamely submitting to the prevalent fashions in metaphysics. More- over, it is expounded with a clearness, and an economy of technical language, which might well be imitated by other philosophers.

It is probably, on the critical rather than the constructive side that the majority of his instructed readers will find Mr. Joad most satisfying. His system—if I have grasped it rightly—is a form of critical realism, in which current theories of emergent evolution are harmonized with a philoso- phy of value. It involves the complete abandonment of that prejudice in favour of Monism which is still paramount in European philosophy ; though there are signs that its reign is drawing to a close. " There is no reason that I have been able to find," says Mr. Joad, " why the universe should be, or should be reduced to, one thing rather than two : and in developing the case for pluralism, he proceeds to subject the monistic outlook to a brilliant and damaging criticism. Since we do not know the whole nature of the universe," we are " not in a position to make statements about it .

It may well be not only more complicated than we know, but more complicated than, at our present level of knowledge, we can possibly suspect ; in fact it seems probable that it is." To assume that its nature must be of a sort which tallies with human desires, is to beg the central question of philosophy. We can only construct our working model with the materials actually before us : and those materials include at least three independent kinds of " existent reals," which obstinately refuse to be swallowed up in one another—Matter, Life, Value. Neither materialism, vitalism, nor idealism therefore tell the whole truth about reality ; but all seem to tell some of the truth. The physical universe is actually there. The world revealed to mind (but to whose mind ?) " appears exactly as it is." But the Life Force is also there ; something wholly other than the matter which is its instrument. And again wholly other, self-subsistent and unchangeable, is that World

of Values to the contemplation of which Life, as it reaches the level of consciousness, more and more aspires ; and which it already glimpses in the persons of its artists, prophets, and mystics.

The goal of evolution consists in reaching a level of " con- tinuous awareness of a world of objective value " ; and when this is achieved, " the Life Force will come to rest in the contemplation of reality." But those who may hope that the " world of objective value " is merely a new and somewhat unattractive name for the Kingdom of Heaven, arc reminded that the Beatific Vision will be enjoyed by the Life Force as a whole ; not by the individuals through which it has found expression in space and time. At death " there is .reason to suppose that the monad of life returns to the main stream, with which it is again merged." This doctrine, then, leaves no place for personal immortality, or personal achievement of eternal life. Saint and seer, lover and artist, all go back into the common stock. Here, I think, we touch the weak point in Mr. Joad's philosophy—his insufficient reverence for the category of personality, his apparent inability to see in the emergence of great souls a fact as unique and significant as any of those on which his system is built. He speaks with contempt of the triviality of the view which could regard " the preparation of a certain number of human souls for perfection " as the main purpose of the universe. But his own pluralistic outlook surely allows us to consider this as one possible purpose, amongst many still unknown. And in the quality of such souls, their power of conveying the eternal, we find perhaps the real answer to that question, " Can the perfect and un- changing enter into contact with the imperfect and chang- ing ? " to which Mr. Joad merely replies by an unqualified negative.

Yet, if true contact with the Realm of Being is denied by him even to the saint, a certain awareness of that realm is allowed to the artist, poet and mystic ; those leading actors in the evolutionary drama." These, he thinks, in their apprehension of Beauty and Goodness do enjoy a kind of contemplation of the Infinite over against us. They are life's precocious children, and for this reason are seldom understood by their fellow-men. The prophet in the grip of his vision is usually either violent or obscure ; the mystic is mostly inarticulate ; only the poet really manages to convey in terms of beauty the touch of " otherness." But in establishing this generalization Mr. Joad has surely drawn his illustrations from too narrow a field. Though the manners of the Old Testament prophets may have been unnecessarily bracing, and the disagreeable qualities of Schopenhauer, Carlyle and Nietzsche, the obscurities of Swedenborg and Blake, interfered with their success—what about the magnetic attraction of Francis of Assisi, the friendly charm of Nicolas of Cuss, or " Mr. Spinoza of blessed memory " ? And when we come to his use of the mystics, we feel an even greater need of testing theory by fact. Who, among those of the first rank, claimed that " continuous vision of the Real," which Mr. Jowl attri- butes to them ?—a claim denounced by Von Hugel as " so much shallow trifling." Not Plotinus, Augustine, Bernard, John of the Cross; to take almost at random four pre-eminent names. Nor is contemplation, for the mystic, ever an end in itself. His goal is always that " union " which Mr. Joad's philosophy cannot admit. Full and arresting as his work is, here it fails to convince us that Life, which possesses the mysterious intuition of Being, must needs stop short of the

fulfilment for which it craves. EVELYN UNDERHILL.