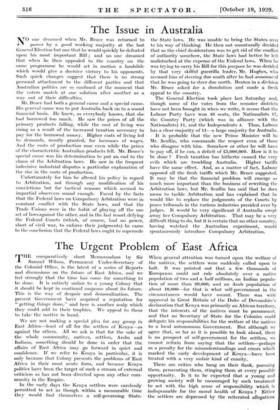 The Issue in Australia

NO one dreamed when Mr. Bruce was returned to power by a good working majority at the last General Election but one that he would quickly be defeated upon his most important Bill ; and no one dreamed that when he then appealed to the country on the same programme he would set in motion a landslide which would give a decisive victory to his opponents. Such quick changes suggest that there is no strong personal attachment to the different parties and that Australian politics are so confused at the moment that the voters snatch at one solution after another as a way out of their difficulties.

Mr. Bruce had both a general cause and a special cause. His general cause was to put Australia back on to a sound financial basis. He knew, as everybody knows, that she had borrowed too much. He saw the prices of all the primary products .falling, while the cost of living was rising as a result of the increased taxation necessary to pay for the borrowed money. Higher costs of living led to demands, mostly granted, for increases of wages. And the costs of production rose even while the prices of the characteristic Australian products fell. Mr. Bruce's special cause was his determination to put an end to the chaos of the Arbitration laws. He saw in the frequent indecisive industrial disputes a particular explanation of the rise in the costs of production.

Unfortunately for him he altered his policy in regard to Arbitration, not through any modification of his convictions but for tactical reasons which seemed to impartial observers sound enough. Faced by the facts that the Federal laws on Compulsory Arbitration were in constant conflict with the State laws, and that the Trade Unions were in the habit of playing off the one set of laws against the other, and in the last resort defying the Federal Courts (which, of course, had no power, short of civil war, to enforce their judgments) he came to the conclusion that the Federal laws ought to supersede the State laws. He was unable to bring the States over to his way of thinking. He then not unnaturally decided that as the chief desideratum was to get rid of the conflict of authority somehow, the State laws had better be left undisturbed at the expense of the Federal laws. When he was trying to carry his Bill for this purpose he was derided by that very skilful guerrilla leader, Mr. Hughes, who accused him of steering due south after he had announced that he was going to steer due north. Beaten in a_division Mr. Bruce asked for a dissolution and made A fresh appeal to the country.

The General Election took place last Saturday and, though some of the votes from the remoter districts have not been brought in when we write, it seems that the Labour Party have won 43 seats, the Nationalists 17, the Country Party (which was in alliance with the Nationalists) 11,' and the Independents 4. Thus, Labour has a clear majority of 11—a large majority for Australia.

It is probable that the new Prime Minister will be Mr. Scullin, who commands the respect even of those who disagree with him. Somehow or other he will have to pay off, if he can, a deficit of £5,000,000. How is it to be done ? Fresh taxation has hitherto caused the very evils which are troubling Australia. Higher tariffs have the same effect. And, as a matter of fact, Labour opposed all the fresh tariffs which Mr. Bruce suggested. It may be that the financial problem will emerge as much more important than the business of rewriting the Arbitration laws, but Mr. Scullin has said that he does mean to tackle Arbitration and has explained that he would like to replace the judgments of the Courts by peace tribunals in the various industries presided over by judges. It would be very significant if Australia swept away her Compulsory Arbitration. That may be a very difficult thing to do, but it is certain that no other country, having watched the Australian experiment, would spontaneously introduce Compulsory Arbitration.