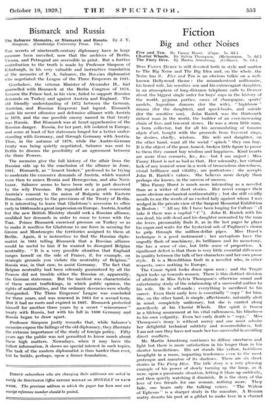 The Saburov Memoirs, or Bismarck and Russia. By J. Y. Simpson. (Cambridge University Press. 15s.) THE secrets of nineteenth-century diplomacy have in large measure been unveiled, now that the archives of Berlin, Vienna, and Petrograd are accessible in print. But a further contribution to the truth is made by Professor Simpson of Edinburgh, in his very valuable and instructive translation of the memoirs of P. A. Saburov, the Russian diplomatist who negotiated the League of the Three Emperors in 1881.

Gorchakov, the veteran Minister of Alexander II., had quarrelled with Bismarck at the Berlin Congress of 1878, because the Prince had, in his view, failed to support Russian demands on Turkey and against Austria and England. The old friendly understanding of 1872 between the Gerrnaii, Austrian, and Russian Emperors had lapsed. Bismarck made his secret offensive and defensive alliance with Austria in 1879, and the one possible enemy named in that treaty was Russia. But Bismarck was at heart apprehensive of the Russian danger. Russia, for her part, felt isolated in Europe, and some at least of her statesmen longed for a better under- standing with Germany, and through Germany with Austria. Thus, in the autumn of 1879, while the Austro-German treaty was being quietly negotiated, Saburov was sent to Berlin to discuss the possibility of an agreement between the three Powers.

The memoirs give the full history of the affair from the Russian side up to the conclusion of the alliance in June, 1881. Bismarck, as " honest broker," professed to be trying to moderate the excessive demands of Austria, which wanted even then to annex Bosnia and Herzegovina, and also Novi- bazar. Saburov seems to have been only in part deceived by the wily Prussian. He regarded as a great concession -Austria's consent to the union of Bulgaria with Eastern Rumelia—contrary to the provisions of the Treaty of Berlin. It is interesting to learn that Gladstone's accession to office early in 1880 made a great impression on Europe. Austria, fearful lest the new British Ministry should seek a Russian alliance, modified her demands in order to come to terms with the Tsar. Prince Bismarck exercised pressure on Turkey so as to make it needless for Gladstone to use force in securing for Greece and Montenegro the territories assigned to them at Berlin. Again, it is instructive to find the Russian diplo- matist in 1881 telling Bismarck that a Russian alliance would be useful to him if he wanted to disregard Belgian neutrality. " It is a very possible situation that Englarid ranges herself on the side of France, if, for example, on strategic grounds you violate the neutrality of Belgium. Russia was, in that case, to assist Germany. The fact that Belgian neutrality had been solemnly guaranteed by all the Powers did not trouble either the Russian or, apparently, the German statesman. But the incident was characteristic of these secret traffickings, in which public opinion, the rights of nationalities, and the ordinary decencies were wholly disregarded. The Three Emperors' League was concluded for three years, and was renewed in 1884 for a second term. But it had no roots and expired in 1887. Bismarck protected himself for another three years by a secret " reinsurance" treaty with Russia, but with his fall in 1890 Germany and Russia began to draw apart.

Professor Simpson justly remarks that, while Saburov's memoirs expose the failings of the old diplomacy, they illustrate the extreme importance of the study of foreign policy. Fifty years ago the public was not permitted to know much abOirt these high matters. Nowadays, when it may have the fullest information, it shows no special interest in such topics. The task of the modern diplomatist is thus harder than ever, but he builds, perhaps, upon a firmer foundation.