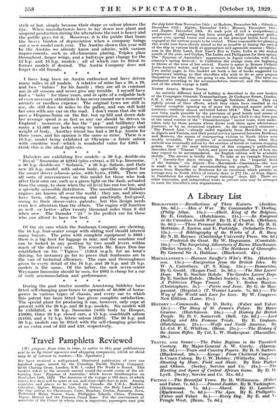 [ IV e. propose, from time to time, to notice in this page publications sent to us by travel agencies and shipping companies, which we think may be of interest to readers.-ED. Spectator.] WE have received a well-printed, illustrated publication of over one hundred pages, issued by the', Canadian'Pacific" Railway Company, 02-65 Charing Cross, London, S.W. 1, called The World is Round. This booklet refers to the seventh annual round-the-world cruise of the oil- burning liner Empress- of Australia,' which leaves Southampton on November 14th, 1929. The duration of the voyage is 183 days, of which ninety-five days will be spent at sea, and sixty-eight days in port. Among countries and places to be visited are Canada, the U.S.A. Madeira, Gibraltar, Algiers, Monaco, Nice, Italy, Greece, the Holy Land (where the ship arrives for Christmas), Cairo, Bombay, Ceylon, Sumatra, Java, Federated Malay States, Siam, Philippine Islands, China, Formosa, Japan, Hawaii_ and the Panama Canal Zone. For the convenience of members of the Cruise to whom time isimportant,passengers may join

and -Naples, -December 1-9th. At each port of van eorriprebeasiro programme of sightseeing has been arranged, while competent fuides, motor cars, special trains and rooms at the principal hotels have been engaged at the various points to be visited. Those responsible for planning this world tour have clearly aimed as far as possible at timing the arrival of the ship in various lands at appropriate and agreeable seasons ; Uffrist- mas in the Holy Land, New Year's Eve in Cairo, India in the 0°0%4 month of the year, and Ceylon, The Indies and Philippines for their spring. The Empress of ' appoaisnce in Japan coincides with that country's spring festival ; - in California' the orange trees are beginning to bloom at the time of her arrival. Easter is spent in Roman Catholic Latin-America waters, and home is reached for the English springtime. Two useful pages in this booklet set forth a list of books suggested for preparatory reading, so that travellers who wish to do so may prepare themselves for what they are going to see, before sailing. The fares are graduated according to the accommodation reserved, and the minimum cost of the whole voyage is £449.

An entirely different kind of holiday is described in the new booklet of the Compagnie Generale Transatlantique, 20 Cockspur Street, rendon, S.W. 1, who conduct motor tours through Northern Africa. They are rightly proud of their efforts, which they claim have resulted in the

almost complete opening up of some ten thousand square miles of territory-territory almost unvisited before 1918." This has, of course, now been made possible by the provision of good hotels and means of communication. As recently as ten years ago, trips which to-day form part of the usual routine of the Transatlantique " motor tours, were under- taken only by those persons whose duties took them upon adventurous journeys, or by an occasional explorer. As the company's steamers-. ' The French Line '-already sailed regularly from Marseilles to. ports in Algeria and Tunisia, and their postal service operated between Bordeaux and Morocco, the means of transporting visitors to North Africa were readily available. The problem of accommodating them when they arrived was eventually solved by the erection of hotels at various stopping points. One of the most interesting of this company's publications describes their " Transat " hotels, and gives an excellent idea of how one may expect to be accommodated. An English edition will be available shortly. The service is briefly this. To take as an example Itinerary " A " (twenty-five days) through Morocco, by the " Imperial Road of the Sultans," via Algiers-Fez-Marrakesh-Casablanca--the tour is made in a motor car accommodating ten people. The cost per person from Marseilles to Bordeaux for an excursion which permits an average stay in North Africa of twenty days is £72 15s., or from Algiers to Casablanca for eighteen " average running " days, £55. There are other itineraries, and independent tours in private cars may be arranged to meet the traveller's own requirements.