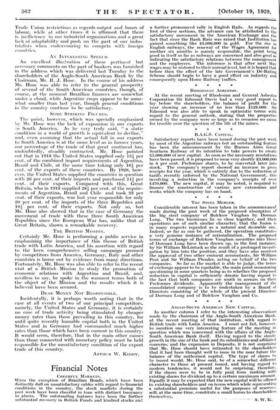 Satisfactory reports have been issued during the past week by most of the Argentine railways but an outstanding feature has been the announcement by the Buenos Aires Great Southern Railway of its intention to take powers to create £5,000,000 of new capital. As soon as the necessary resolutions have been passed, it is proposed to issue very shortly £3,000,000 in 6 per cent. Preference shares, to be converted later into stock. The company's report showed' an increase in gross receipts for the year, which is entirely due to the reduction of tariffs recently enforced by the National Government, this involving a reduction in the company's receipts of over £470,000. The new capital, it may be noted, is required to finance the construction of various new extensions and works which the company has on hand.