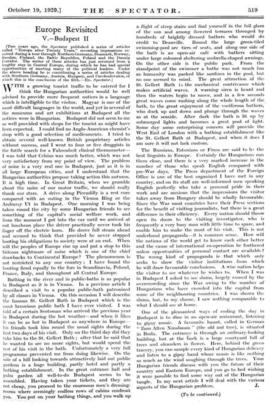 [ Two years a g o, the Spectator published a series of articles

called "Europe after Twenty Years," recording impressions re- ceived during a tour through Northern Germany, Denmark, Norway, Sweden, Finland, the Baltic Republics, Poland and the Danzig Corridor. The writer of these articles has just returned from a lengthy stay -in Central Europe, during which he has had special opportunities of meeting many of the political leaders. Under the above heading he is contributing a series of articles dealing with Southern Germany, Austria, Hungary, and Czechoslovakia, of which this is the conclusion of the fifth.—En. Spectator.] WITH a growing tourist traffic to be catered for I think the Hungarian authorities would be well advised to provide more frequent notices in a language which is intelligible to the visitor. Magyar is one of the most difficult languages in the world, and yet in several of the museums and art exhibitions at Budapest all the notices were in Hungarian. Budapest did not seem to me so well provided with shops for the tourist as might have been expected. I could find no Anglo-American chemist's shop with a good selection of medicaments. I tried to obtain several well-known British proprietary articles without success, and I went to four or five druggists in the futile search for a Fahrenheit clinical thermometer— I was told that Celsius was much better, which was not very satisfactory from my point of view. The problem of noise is a very real one in Budapest, just as it is in all large European cities, and I understand that the Hungarian authorities propose taking action this autumn. It is high time. In Great Britain, when we grumble about the noise of our motor traffic, we should really thank our stars. A drive along Piccadilly is a rest cure compared with an outing in the Vienna Ring or the Andrassy Ut in Budapest. One morning I was being taken round the city by some Hungarian friends to see something of the capital's social welfare work, and from the moment I got into the car until we arrived at out luncheon place the driver practically never took his finger off the electric horn. He drove full steam ahead and seemed to think that provided he never stopped hooting his obligations to society were at an end. When will the peoples of Europe rise up and put a stop to this hideous nightmare of noise which is one of the chief drawbacks to Continental Europe? The phenomenon is not restricted to any one country ; I have found the hooting fiend equally to the fore in Scandinavia, Poland, France, Italy, and throughout all Central Europe.

Bathing in the river and in public-baths is as popular in Budapest as it is in Vienna. In a previous article I described a visit to a popular public-bath patronized by all classes in Vienna. On this occasion I will describe the famous St. Gellert Bath in Budapest which is the most luxurious public bath I have ever visited. I was told of a certain Scotsman who arrived the previous year in Budapest during the hot weather—and when it likes it can be as hot in Budapest as anywhere in Europe— his friends took him round the usual sights during the first two days of his visit. Only on the third day did they take him to the St. Gellert Bath ; after that he said that he wanted to see no more sights, but would spend the rest of his visit in the bath. Unfortunately a very full programme prevented me from doing likewise.. On the side of a hill looking towards attractively laid out public gardens is a huge building, partly hotel and partly a bathing establishment. In the great entrance hall and palm garden =all well-to-do Budapest seems to be assembled. Having taken your tickets, and they are not cheap, you proceed to the enormous men's dressing- rooms where seemingly endless rows of cabins confront you. You put on your bathing things, and you walk up a flight of steep stairs and find yourself in the full glare of the sun and among flowered terraces thronged by hundreds of brightly dressed bathers who would do credit to Deauville. Round the large green-tiled swimming-pool are tiers of seats, and along one side of the bath is an open-air café with bathers sitting under large coloured sheltering umbrella-shaped awnings. On the other side is the public park. From the standpoint of the swimmer a bathe was not much fun as humanity was packed like sardines in the pool, but no one seemed to mind. The great attraction of the St. Gellert Bath i s the mechanical contrivance which makes artificial waves. A warning siren is heard and then the waters begin to move, and in a few seconds great waves come rushing along the whole length of the bath, to the great enjoyment of the vociferous bathers, who duck up and down and plunge through the waves as at the seaside. After dark the bath is lit up by submerged lights and becomes a great pool of light. Some day some enterprising concern will provide the West End of London with a bathing establishment like the St. Gellert Bath at Budapest, and when it does I am sure it will not lack custom.

The Russians, Estonians or Finns are said to be the best linguists in Europe. Certainly the Hungarians run them close, and there is a very marked increase in the number of those who speak English compared with pre-War days. The Press department of the Foreign Office is one of the best organized I have met in any country, and on its staff are well-informed men speaking English perfectly who take a personal pride in their work and are anxious that the impressions the visitor takes away from Hungary should be wholly favourable. Since the War most countries have their Press sections for the benefit of visiting journalists, but there is a great difference in their efficiency. Every nation should throw open its doors to the visiting investigator, who is frequently a very busy man with little time to spare, and enable him to make the most of his visit. This is not underhand propaganda—it is common sense. How will the nations of the world get to know each other better and the cause of international co-operation be furthered unless opportunities of personal contact are available ? The wrong kind of propaganda is that which only seeks to show the visitor institutions from which he will draw favourable conclusions. A wise nation helps the visitor to see whatever he wishes to. When I was in Budapest I asked to see slums, largely caused by the overcrowding since the War owing to the number of Hungarians who have crowded into the capital from some of the neighbouring countries. I was shown the slums, but, to my shame, I saw nothing comparable to what I should see at home.

One of the pleasantest ways of ending the day in Budapest is to dine in an open-air restaurant, listening to gipsy music. A favourite haunt, called in German " Zum Alten Nussbaum " (the old nut tree), is situated in Buda. The entrance is through an ordinary-looking building, but at the sack is a large courtyard full of trees and oleanders in flower. Here, behind the green tracery, you can sample every kind of Hungarian delicacy and listen to a gipsy band whose music is like nothing so much as the wind soughing through the trees. Your Hungarian friends discuss with you the future of their country and Eastern Europe, and you go to bed wishing it were possible to find some way out of the Hungarian tangle. In my next article I will deal with the various aspects of the Hungarian problem. J.