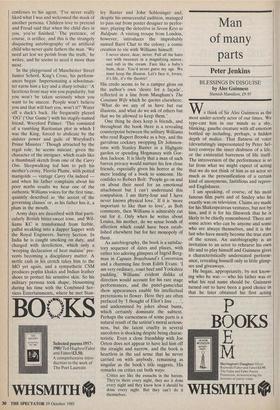 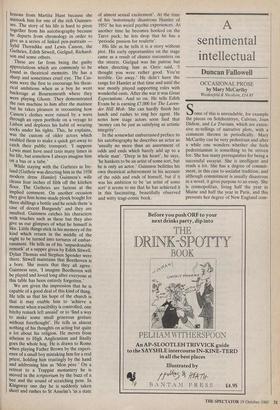 Man of many parts

BLESSINGS IN DISGUISE by Alec Guinness

We think of Sir Alec Guinness as the most under-actorly actor of our times. We type-cast him in our minds as a shy, blinking, gauche creature with all emotion bottled up including, perhaps, a hidden depth of malice. That flatness of voice (devastatingly impersonated by Peter Sel- lers) conveys the inner drabness of a life, or the existential barreness of life itself. The introversion of the performance is so far from what we might expect of acting that we do not think of him as an actor so much as the personification of a certain kind of anonymous, fastidious and repres- sed Englishness.

I am speaking, of course, of his most famous film parts and of Smiley who he exactly was on television. Claims are made for his Shakespearean ventures, but not by him, and it is for his filmwork that he is likely to be chiefly remembered. There are some actors who can be anyone and some who are always themselves, and it is the last who have mostly become the true stars of the screen. An autobiography is an invitation to an actor to rehearse his own life and to play himself and Guinness gives a characteristically understated perform- ance, revealing himself only in little glimp- ses and giveaways.

He began, appropriately, by not know- ing who he was — who his father was or what his real name should be. Guinness turned out to have been a good choice in that he later obtained his first acting lessons from Martita Hunt because she mistook him for one of the rich Guinnes- ses. The story of his life is hard to piece together from his autobiography because he departs from chronology in order to give us a series of linked pen-portraits Sybil Thorndike and Lewis Casson, the Guthries, Edith Sitwell, Gielgud, Richard- son and some others.

These are far from being the gushy appreciations which are commonly to be found in theatrical memoirs. He has a sharp and sometimes cruel eye. The Cas- sons were the first to encourage his theat- rical ambitions when as a boy he went backstage at Bournemouth where they were playing Ghosts. They demonstrated the rain machine to him after, the matinee but he takes pleasure in recounting how Casson's clothes were ruined by a wave through an open porthole on a voyage to Lisbon and deplores his habit of wearing socks under his tights. This, he explains, was the custom of older actors which enabled them to make a quick get-away to catch their public transport. 'I suppose Lewis must have used taxis many times in his life, but somehow I always imagine him on a bus or a tube.'

While staying with the Guthries in Ire- land (Guthrie was directing him in the 1938 modern dress Hamlet) Guinness's wife cleans four inches of filth off the kitchen floor. The Guthries are furious at the implied comment. On another occasion they give him home-made plonk bought for three shillings a bottle and he sends them 'a case of decent Burgundy' and they are insulted. Guinness catches his characters with touches such as these but they also give us our glimpses of what he himself is like. Little things stick in his memory of the kind which return in the middle of the night to be turned into tortures of embar- rassment. He tells us of his 'unpardonable remark' at a supper given by Edith Sitwell. Dylan Thomas and Stephen Spender were there. Sitwell maintains that Beethoven is a bore. She insists that they all agree. Guinness says, 'I imagine Beethoven will be played and loved long after everyone at this table has been entirely forgotten.'

We are given the impression that he is capable of a good deal of this kind of thing. He tells us that his hope of the church is that it may enable him to 'achieve a moment when irascibility is controlled, one bitchy remark left unsaid' or to 'find a way to make some small generous gesture without forethought'. He tells us almost nothing of his thoughts on acting but quite a lot about his religion. He moves from atheism to High Anglicanism and finally goes the whole hog. He is drawn to Rome when playing Father Brown by the experi- ence of a small boy mistaking him for a real priest, holding him trustingly by the hand and addressing him as 'Mon pere.' On a retreat to a Trappist monastery he is moved in the scriptorium by the buzz of a bee and the sound of scratching pens. In Kingsway one day he is suddenly taken short and rushes to St Anselm's 'in a state of almost sexual excitement'. At the time of his 'notoriously disastrous Hamlet of 1951' he has weird psychic experiences. At another time he becomes hooked on the Tarot pack; he lets drop that he has a `periodic passion for roulette'.

His life as he tells it is a story without plot. His early opportunities on the stage came as a result of chance encounters on the streets. Gielgud was his patron but when directing him as Osric said, 'I thought you were rather good. You're terrible. Go away.' He didn't have the range for Hamlet at that time and until the war mostly played supporting roles with wonderful casts. After the war it was Great Expectations. And so on. He tells Edith Evans he is earning £7,000 for The Laven- der Hill Mob. She can hardly finish her lunch and rushes to ring her agent. He notes how stage actors soon find that `money can be just as satisfying as artistic integrity'.

In the somewhat embarrassed preface to his autobiography he describes an actor as `usually no more than an assortment of odds and ends which barely add up to a whole man'. 'Deep in his heart', he says, `he hankers to be an artist of some sort, but he is only an actor.' Guinness belittles his own theatrical achievement in his account of the odds and ends of himself, but if it was his ambition to be 'an artist of some sort' it seems to me that he has achieved it in this fascinating, beautifully observed and witty tragi-comic book.