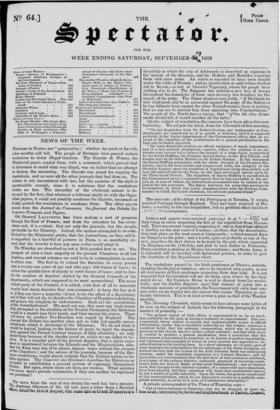 MATTERS in France are " progressing ;" whether for good or for evil, a few months will tell. The people of Bretagne have passed certain resolutions to resist illegal taxation. The. Gazette de France, the Ministerial paper, copied theni with a comment, which proved that to determine to resist what was illegal, was no better than an attempt to destroy the monarchy. The Gazette was seized for copying the resolutions, and so were all the other journals that had done so. The seizure is not inconsistent with law, but the exercise of the right is questionable enough, since it is notorious that the resolutions violate no law. The absurdity of the wholesale seizure is in- creased by the fact, that whatever a tribunal might do with the Oppo- sition papers, it could not possibly condemn the Gazette, insomuch as itonly quoted the resolutions to condemn them. The other papers seized were the Journal du Commerce, theilournal des Debats, the Courrier Francais, and Figaro.

Old General LAFAYETTE has been . making a sort of progress through the East of France; and from the reception he has every- where met, it is evident, that not only the journals, but the, people, are hostile to the Ministry. Indeed, the opinion attempted to be esta- blished by the Ministerial prints, that the journalisme, as they call it, is supported by a handful of persons in Paris, is so manifestly • ab- surd, that the wonder is how any sane writer could adopt it.

The Ministry are described as not a little puzzled how to act. The prospect of even a bare majority in the present Chambers is all but hopeless, and several schemes are said to be in contemplation in order to obtain one. The first is, to extend the franchise to every person who is twenty-one years of age and who pays 300 francs of taxes ; to reduce the qualification of deputy to 1000 francs of taxes ; and to dou- ble the number of deputies elected by the General Councils of the departments, which are supposed to be most monarchical. The more violent party of the Cabinet, it is added, wish first of all to ascertain exactly how many deputies they can command ; to keep the law as it is, if they can have a majority—if not, to try the effect of a dissolution; and if that will not do,' to dissolve the Chamber of Deputies indefinitely, and govern the kingdom by ordonnances. Such are the speculations of the Constitutionnel. We need not say, that were any such insane folly attempted as the abolition of the French Parliament, the Ministers would in a month lose their heads, and their master his crown. There will never be another Pro-Bourbon war waged by England. The Journal des Debats has another plan, not so wild, but equally uncon- stitutional, which it attributes to the Ministers. We do not think it would be logical,looking to the history of party, to reject the imputa- tions against the French Cabinet because of their absurdity; we only doubt them because of the slender proof on which we are called to be- lieve. It is a singular part of the present disputes, that a _grave argu- ment is maintained between the Liberals and the Ministerialists, whe- ther the King may not, if he please, impose taxes without the consent of the Chambers ; and the seizure of the journals, because of the Bre- tagne resolutions, would almost indicate that the Cabinet incline to the latter opinion. The Courrier des Electeurs describes the Minisi ers as occupied in establishing a general system of espionage throughout France. But spies, where there are laws, are useless. What signifies it to know men's private sentiments, if they can neither be repressed for punished ?