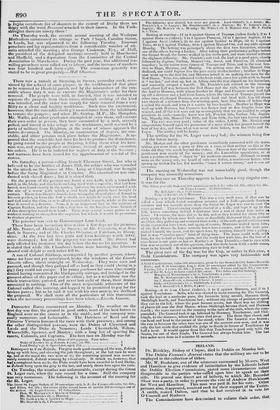 There was a tumult at Steyning, in Sussex, yesterday week,

occa- sioned by the refusal of some paupers in the workhouse of that place to be removed to Ili:Wield parish, and by the misconduct of the con- stable whose duty it was to execute the Magistrate's order for their removal. The people were told, or fancied, that it was intended to separate the paupers from their wives, although nothing of the kind

was intended, and the order was simply for their removal from a very filthy to a clean and healthy workhouse. Such was the excitement,

however, that the constable could got no assistance from the inhabitants

to remove the paupers ; and when Mr. Goring, M. 1k., Mr. Hampden, Mr. Wallis, and other gentlemen attempted to seize them, and execute

their own order in person, they were surrounded by a mob, severely pelted, and tarred to take refuge in the workhouse, until rescued by a party of military from Brighton, at the noise of whose approach the rioters deramped. OH Monday, an examination of Sayers, the con- stable, and other persons took place before the Magistrates. It ap- peared that the constable bad done his best to produce the disturbance, by going round to the people at Ste) thug, ti iling them what his busi-

ness was, and requiring their assistance, instead of quietly executing Lis orders. Ile is to be indicted for neglect of duty at the Sessions ; and warrants have been issued for the apprehension of several of the rioters.

On Saturday, a person railing himself Ebenezer Street, but who is believed to be the brother of James Hill, the robber who was wounded in the attack on the house of Mrs. Long at Chipstead, was brought before the Surry Magistrates at Croydon. His examination was con- ducted with closed doors ; but it is stated that, On the person of the prisoner was found ,a case-knife, with a remarkable notch in the blade, and this knife on hoing tiicd with a teacohly, that had been forced, was found exactly fit the unlinks; and even the notch corresponded a ith the size of a set ew with which a teel Made had plainly been brought in contact. There was likewise found it hii,za. ttiangular-shitped piece of Ilamiel in bis coat-paeket, in form like half a shawl, :mil might he wion over the head and tied under the chin, so as to afford considerable warmth, while at the same time It served as a disguise. Now, it is an important fact in the evidence of Captain Rankin, and the two hali..s, that two of the buithits wore flannels of of this description round their It ad:. There woe several ininor points in the evidence tending to strengthen the so:Ticino, but a hich it would be pratuatute to disclose at present.

The prisoner was sent to Horsemonger Lane Gaol.

There have been hullo:hay tires w:thin a few days on the premises of Mr. Boner, of Hentield, ill Sussex ; of Mr. Chambers, near Sea- ford, in Sussex ; and of Mr. Chai les Osborne, at Fare ham, in Hamp- shire. At the two last limes grain and firm buildings worth SWIM. were destroyed ; but all the property was insured. Mr. Borrer had only effected his insurance the day before the fire Oil ItiS premises. It is stated that while Mr. Chambers's barns were buroiag, the labourers. shouted wide delight as each rafter fell in.

A son of Colonel Sibthorp, accompanied by another person, whose name we have not yet ascertained, broke the windows of the Lincobt

Gazette office, about midnight on Wednesday. They were seen and pursued, and though they galloped off as hard as they could (being in a gig) they could not escape. The young gentlemen fur some time stoutly denied having committed the blackguardly outrage, and indulged in the grossest abuse of this paper and its editor ; but as a neighbour saw the whole transaction, pursued, and never lost sight of them, their denials amounted to nothing. Me of the most respectable adherents of the Colonel culled this mornings and begged to be permitted to pay for the broken panes ; but as lie said it was with his own money, we declined the proposal. We shall state all the particulars of this transaction when the necessary proceedings have been taken.—Lincoin Gazette.