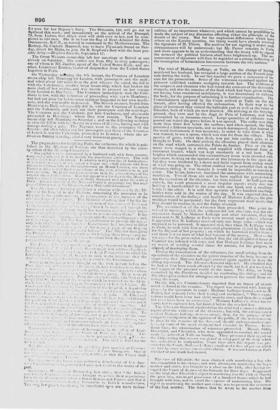 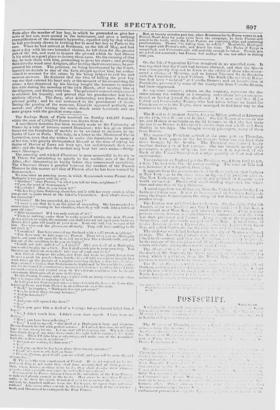 The trial of Madame Laffarge, at Tulle, on the charge

of having murdered her husband, has occupied a large portion of the French jour- nals during the week. In our last number we gave a statement of the case for the prosecution. Some of the witnesses examined against the prisoner exhibited extreme malignity towards her. The evidence of the surgeons and chemists who had tested the contents of the deceased's stomach, and also the remains of the food which had been given to him, not having been considered satisfactory, it was determined to exhume the body, for the purpose of submitting it to further examination. The

Commissioners appointed by the Court arrived at Tulle on the 8th instant, after having effected the exhumation. In their way to the place of interment they visited the habitable part as well as the ruins of Glandier, both of which are now deserted. On arriving at the burying- ground, they were met by the Juge de Puix of Lubersac, and were surrounded by an immense crowd. Large quantities of chlorate were poured out round the grave before it was opened. The coffin was little more than three feet below the surface; and when opened, the body presented a hideous spectacle, and so much decomposed, that instead of the usual instruments, it was necessary, in order to take from it what was wanted, to use a spoon, which was sent for from the village. This species of paste, rather than flesh, was put into earthmen pots, to be brought to Tulle. On their arrival, the chemists placed their alembics on the road which surrounds the Palais de Justice. Five or she fur- naces were ranged in a circle, and supplied with charcoal front an enormous brazier, svhich was kept constantly at a red heat. The heights which commanded this extraordinary scene were crowded with spectators, looking on the operations of this laboratory in the open air; but they were hindered by a dense and foetid vapour front seeing mach of vLat was going on The odour emitted was so powerful that. at the afternoon sitting, it was thought it would be impossible to remain in court. The ladies, however, sustained the annoyance with astonishing resolution. Two of them are said to have applied for permission to see the operations of the chemists, but were refused. At half-past one o'clock, the court presented a most singular aspect: every one was holding a handkerchief to the nose with one hand, and a smelling. battle in the other. it is said that upwards of five hundred smelling- bottles were sold in the course of the day. It was expected that, in consideration of the feelings and health of Madame Latfarge, the pro- ceedings would be postponed; but the Jury expressed their desire that they should be continued, and the Judge assented.

The examination of the witnesses then proceeded. One paint in- volved in mystery, which the evidence did not cinch:ate, was the cir- cumstance stated by Madame Laffarge and other witnesses, that the cakes sent to 31. Laffarge at Paris were several small cake-s; whereas it appeared that 31. Lafarge received only one large cake—which was supposed to 1 c poisoned. It appeared also, that when 31. Litrarge went to i aris, he took with him an unlimited procuration .iced by his wife for the disposal of her property ; on which he borrowed 25,01:n frailest and there ,vas ro trace of what had become of the money. 31( sr t. the witnessi.s for the prosecution admitted that the old dilapidated iihuse at Olandier arcs infested with rats; and that Madame Lallitrge had suede no secret of sending several times for arsenic, fur the purpose, as alleged, of destroying them.

During the examination of the witnesses, the smell arising from the operations of the chemists on the putrid remains of the hotly bl'came to oppre:::-ive that Martime Lafrorge's counsel again applied to have the sitting adjottrued. The Advocate-Goa-rid objeeted. Ile admitted that he had at first been much affected by the smell, but had got used to it, and sappo-ed the prisoner would du the same. Th.: Jory, on being

consult by the President, decided on continuing the sitting; and the Pre,ident gave orders for arrangements to prevent the smell front cm- terhig the court.

On the 9th, the Commissioners reported that no traces of arsenic could ai: found in the remains. The report was received with loud up- planyt the rpeetators in court : Madame Lattarge leaned over to 31. Pailict, her counsel, (who shed tears,) and exclaimed, " These expla- nations could have been had tight months since, and then there would not ey, havi: been an accusation." 'Madame Eo1bh,ai s sister ran to- ards her to eillilnlee her, but lhinted before she reached her.

'flit ,•:1,3' of Erral)ble, the 111:411 charged whit murdering a boy who Wu:, committed lo his charge, and with iinerwarthi nonalcring the boy's mother awl aister, :,s hi-011;01i to it close on the I I after having oe- copied the 'mat of A s•hzes Hf Ihe Gironde for three thy s. It appeared on the trial, that filif.;11,ide'l, ol,j,;(1. in murdering (on the 1.1111 of March) the poor boy, was to get posysssoo of a hunch is' frauto. which he had brought with him, and to avoid the I 0penne of niainiaiiiing Liu,. Ills objeet in murdering the mother awl wits to prevent. the (lc:crimp (4. 11“.1 tint tuttrdtz The ktter3 that he wrote to the mother from Paris after the murder of her boy, in which be pretended to give her news of her son, were quoted in the indictment, and gave a striking exemplification of the assassin's hypocrisy, equalled only by that which he had previously shown in inviting her to send her boy to Paris to his care. When he had arrived at Bordeaux, on the Sth of May, and had spent a day with his two intended victims, he left them for the greater part of the 9th, and went to inspect the ground which he had chosen m his mind as a good place to destroy them upon. On the evening of that day, he tool: them with him, pretending to go to his sister ; and getting them into the wood near Artigues, after leaving their conveyance, he per- petrated his crime. The prisoner, on being interrogated by the Court, opposed no denials to any of the facts alleged against hint, but endea- voured to account for the crime by his being subject to evil fits and mamwais moments. lie declared that the idea of killing the pour boy was one that entered his bead only at the moment of his committing the crime: a fact disproved by his having bought the hammer to murder him with during the morning of the 14th March, after meeting him at the diligence, and dining with him. The prisoner's counsel endeavonrsd to establish his insanity, and proved that his grandmother had been similarly affected. The Jury, after deliberating two boors, found the prisoner guilty ; and he was sentenced to the punishment uf death. During the passing of the sentence, Elisabide appeared perfectly un- moved; and after leaving the court, drank some lemonade and ate some grapes with the greatest composure.