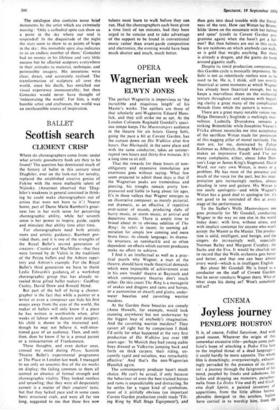 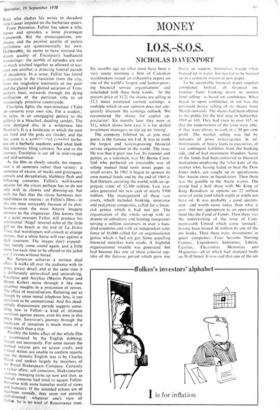 It is, of course, Fellini Satyricon. And with good reason. Whatever the origin of this somewhat excessive title—perhaps some pub- licist's hope of attaching a Dolce Vita lure to the implied threat of a dead language— it could hardly be more apposite. The whole film is drenchingly, overpoweringly, exhaust- ingly pervaded by the presence of its direc- tor: a journey through the fairground of his mind, peopled by freaks and sideshows, fat ladies and dripping sea monsters, parapher- nalia from La Dolce Vita and 84 and Giali- etta degli Spiriti, a painted inventory of apparitions, from the little albino herma- phrodite demigod to the armless, legless hero carried in to worship him, from the

Stoic who slashes wrists to decadent little Caesar impaled on the barbarian spears. From Petronius, Fellini has taken a title, names and episodes, a loose picaresque framework. But the preoccupations, em- phases, and the peculiar quality of joyless zestfulness are quintessentially his own. Delikrattly, he seems to have stressed the dream quality of Encolpius's haphazard wanderings: the jumble of episodes are not so much stitched together as allowed to suc- ceed one another,-a prancing funeral parade of decadence. In a sense, Fellini has found a structure in the transition from the city, from the troglodyte tenements of the poor and the glazed and glutted satiation of Trim- alchio's feast, outwards through the dying civilisation of the patrician villa to an increasingly primitive countryside.

Encolpius fights the man-minotaur (`Take on someone your own size, I'm a student,' he yelps, in an unengaging gesture to the gallery) in a bleached, dazzling sandpit. The little demigod dies in a wilderness like

Pasolini's. It is a landscape in which the men are tired and the gods are tireder; and the last scene is a sonhiO4,-iced clbnibll barbe- cue on a barbaric seashore, amid what look like totemistic filing cabinets. No end to the journey; Encolpius is cut off in mid-voyage and mid-sentence.

As the film so slowly unrolls, the impres- sion is of sameness rather than variety: a sameness of excess, of masks and grotesques, entrails and decapitation, blubbery flesh and billowing costumes. Fellini's well-known passion for the circus perhaps has to do not

only with its clowns and dressing-up; but with the fact that the circus harnesses out-

landishness to routine: in Fellihi's films—in this one most noticeably because of its plot- lessness—even the most bizarre imagery answers to the ringmaster. One knows that in a quiet moment Fellini will produce his sentimental 'Angel' (eternal echo of the little

girl on the beach at the end of La Doke Vita), that worshippers will crouch at strange shrines, that a white horse will rear against a dark tenement. The images don't expand: they merely come round again, and a little more has each time to be offered to the jaded eye. Circuses without bread.

But Satyricon achieves a curious dual effect. It walks all over the audience with its gross, greasy detail, and at the same time it is deliberately uninvolved and uninvolving. Encolpius and Ascyltus (Martin Potter and Hiram Keller) move through it like two streetboy noughts in a procession of zeroes. The effect of neutralisation, flattening out as though by some moral telephoto lens, is too persistent to be unintentional. And this dead- eningly dispassionate parade suggests some- thing new in Fellini—a kind of ultimate revulsion against excess, even his own in this obese film. Satyricon's journey through the landscape of sensation is much more of a route-march than a trip. . Possibly the limbo effect of the whole film Is accentuated by the English dubbing; though not necessarily. For some reason the dubbed version gets no screen credit, and 1'nited Artists are unable to confirm reports that the demotic English text is by Charles Wood and spoken largely by members of the Royal Shakespeare Company. Certainly a rather effete, self-conscious, Shakespearian cockney twanging turns up now and then, as though someone had tried to equate Fellini- Petronius with some homelier world of stews and humours. If the intended echoes are of Jacobean comedy, they seem not entirely

well-directed: whatever one's view of Fellini, he is no kind of Renaissance man.