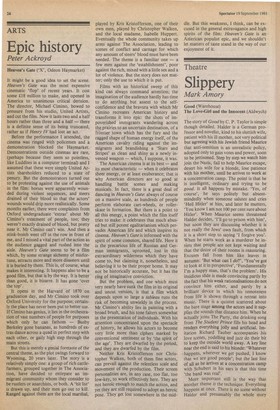 It might be a good idea to set the scene. Heaven's Gate was the most expensive cinematic 'flop' of recent years. It cost some £18 million to make, and opened in America to unanimous critical derision. The director, Michael Cimino, bowed to pressure from his studio, United Artists, and cut the film. Now it lasts two and a half hours rather than three and a half — there is a definite sense of its being truncated, rather as if Henry IV had lost an act.

Before the performance I attended, the cinema was ringed with policemen and a demonstration blocked the Haymarket. Demonstrations outside cinemas are rare, (perhaps because they seem so pointless, like Luddites in a computer terminal) and I assumed that these were simply United Artists shareholders reduced to a state of penury. But the demonstrators turned out to be protesting against the use of animals in the film: horses were apparently wounded during violent sequences, and steers drained of their blood so that the actors' wounds would drip more realistically. Some months earlier, there were complaints from Oxford undergraduate 'extras' about Mr Cimino's treatment of people, too; they weren't exactly drained of blood, but pretty near it. Mr Cimino can't win. And then a stink-bomb went off in the row in front of me, and I missed a vital part of the action as the audience gagged and rushed into the aisle. Heaven's Gate seems to be a film which, by some strange alchemy of misfortune, attracts more and more disasters until it is buried by them. This is, of course, what makes it interesting. It happens also to be a good film, but that is by the way. It is better than good, it is bizarre. It has gone 'over the top'.

It opens in the Harvard of 1870 on graduation day, and Mr Cimino took over Oxford University for the purpose; certainly the place has never been put to better use. If Cimino has genius, it lies in the orchestration of vast numbers of people for purposes which only he can fathom — Busby Berkeley gone bananas, as hundreds of extras dance across a quad in perfect step with each other, or gaily high step through the main streets.

But this is merely a genial foretaste of the central theme, as the plot swings forward to Wyoming, 20 years later. The story is a relatively simply one: a group of rich cattlefarmers, grouped together in The Association, have decided to extirpate an immigrant community whom they consider to be rustlers or anarchists, or both. A 'hit list' is drawn up, and their men go out to kill. Ranged against them are the local marshal, played by Kris Kristofferson, one of their own men, played by Christopher Walken, and the local madame, Isabelle Huppert. Eventually the whole community takes up arms against The Association, leading to scenes of conflict and carnage for which any amount of steers' blood must have been needed. The theme is a familiar one — a few men against the 'establishment', poor against the rich, mixed with a little sex and a lot of violence. But the story does not matter; only the use to which it is put.

Films with an historical sweep of this kind can always command attention; the imagination of the audience hardly has time to do anything but assent to the selfconfidence and the bravura with which Mr Cimino recreates American history and transforms it into epic: the shots of impoverished immigrants wandering across the prairies to an uncertain destination, of a frontier town which has the fury and the ragged shape of human energy itself, of the American cavalry riding against the immigrants and brandishing a 'Stars and Stripes' as clean and shiny as a newly invented weapon — which, I suppose, it was.

The American cinema is at its best — and its most characteristic — when it celebrates sheer energy, or at least exuberance; that is why American directors are so good at handling battle scenes and making musicals. In fact, there is a great deal of dancing in Heaven's Gate: always of course on a massive scale, as hundreds of people perform elaborate cart-wheels, or rollerskate in formation. But there is a point to all this energy, a point which the film itself tries to make: it celebrates that much abused but still potent egalitarianism which pervades American life and which inspires its cinema. Heaven's Gate is informed with the spirit of some common, shared life. Here it is the precarious life of Russian and German immigrants, uprooted, lost in this extraordinary wilderness which they have come to, but claiming it, nonetheless, and believing it to be their proper home. It may not be historically accurate, but it has the ring of imaginative conviction.

But the problem, and one which must very nearly have sunk the film in its original and uncut version, is that a film which depends upon so large a tableau runs the risk of becoming unwieldy in the process. Mr Cimino's ability lies in painting with a broad brush, and his tone falters somewhat in the presentation of individuals. With his attention concentrated upon the spectacle of history, he allows his actors to become very little more than ciphers marked by conventional sentiment or by 'the spirit of the age'. They are dwarfed by the period, and they are dwarfed by the film.

Neither Kris Kristofferson nor Christopher Walken, both of them fine actors, can prevail against the relentless scale and movement of the production. Their screen personalities are, in any case, too flat, too low-key, to work effectively here. They are not heroic enough to match the action, and yet they are still required to adopt an heroic pose. They get lost somewhere in the mid dle. But this weakness, I think, can be excused in the general extravagance and high spirits of the film: Heaven's Gate is an American populist epic, and we shouldn't let matters of taste stand in the way of our enjoyment of it.