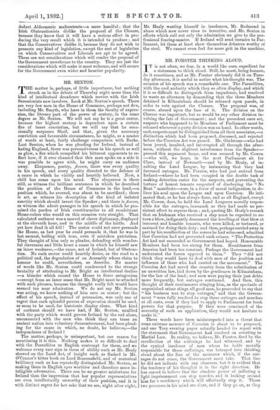 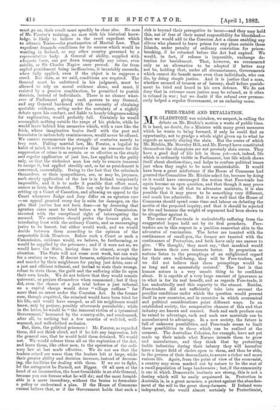 T is not often, we fear, in a world like ours, expedient for

a statesman to think aloud. Still, he must, being human, do it sometimes, and as Mr. Forster obviously did it on Tues- day afternoon, it is useful to notice what his thought was. The occasion of his speech was a remarkable one. The Parnellites, with the cool audacity which they so often display, and which it is so difficult to distinguish from impudence, had resolved to waste an afternoon by demanding that the three Members detained in Kilmainham should be released upon parole, in order to vote against the Closure. The proposal was, of course, absurd upon the face of it. The division on the Closure was important, but so would be any other division in- volving the fate of Government ; and the precedent once set, suspects who happened to be Members of Parliament must be released whenever a party division was on hand. In other words, such suspects must be distinguished from all their associates,—a distinction which had b3en proposed, discussed, and rejected before the Coercion Act was passed. Mr. Gladstone—who had been jeered, insulted, and interrupted all through the after- noon, without the slightest interference from the Speaker— pressed this argument home, and was accused by Mr. Cowen —who will, we hope, in the next Parliament sit for Clare, instead of Newcastle—and by Mr. Healy, of in- sulting the Land League, by insinuating that they had favoured outrages. Mr. Forster, who had just arrived from Ireland—where he had been occupied in the double task of making detention easier for the suspects, and preventing the torture of honest tenants suspected of disobeying the "No Rent" manifesto—rose, in a fever of moral indignation, to de- liver his soul upon the League and upon Coercion. He inti- mated that, as he has always done, and as all England, except Mr. Cowen, does, he held the Land Leaguers morally respon- sible for the outrages, inasmuch as they had made no per- sistent effort to repress them ; and, quoting Mr. Healy's remark that an Irishman who received a slap must be expected to re- turn a blow, indignantly denounced the levelling of that blow at innocent and humble tenants, who were killed, or tortured, or maimed for doing their duty; and then, perhaps carried away in part by his recollection of the scenes he had witnessed, admitted that Coercion had not prevented such crimes. "The Protection Act had not succeeded as Government had hoped. Honourable Members had been too strong for them. Remittances from America had been too constant. Perhaps the Government had underrated the forces opposed to them." They "did not

think they would have to deal with men of the position and influence of those who had carried on the movement." The Coercion Act had saved the country from the substitution of an unwritten law, laid down by the gentlemen in Kilmainham, for the law of the land ; and men were paying their just debts more frequently, but outrages continued. And then, this thought of their continuance stinging him, as the spectacle of unpunished crime stings all good men, he proceeded to say that "his business was to stop outrages," and that the Govern- ment "were fully resolved to stop these outrages and murders at all costs, even if they had to apply to Parliament for fresh powers for that purpose. If they were convinced of the necessity of such an application, they would not hesitate to make it."

These words have been misinterpreted into a threat that some extreme measure of Coercion is about to be proposed, and one Tory evening paper actually headed its report with the statement that Government had resolved on resorting to Martial Law. In reality, we believe, Mr. Forster, fired by the recollection of the sufferings he had witnessed, and by the cynical insolence of men whom he holds morally responsible for those sufferings, was betrayed into thinking aloud about the line of the measures which, if the oat-

rages do not cease, the Government must take. That line he did not indicate with any clearness, but it is evident that

the tendency of his thoughts is in the right direction. He has ceased to believe that the absolute power of inflicting a light imprisonment can stop murder, and is looking around him for a machinery which will effectually stop it. Those two processes in his mind are clear, and if they go on, as they must go on, their result must speedily be clear also. No man of Mr. Forster's training, no man with his historical know- ledge, is likely to believe in the cruel expedient which so attracts Tories—the proclamation of Martial Law. That expedient demands conditions for its success which would be wanting in Ireland, or any other country governed by a representative body. A General of ability, supplied with adequate force, can put down temporarily any crime, even suicide, as Sir Charles Napier once proved. So far from capital punishment being inefficacious, it invariably succeeds, when fully applied, even if the object is to suppress a creed. But then, as we said, conditions are required. The General must be unfettered in his judgment, must be allowed to rely on moral evidence alone, and must, if resisted by a passive combination, be permitted to punish districts, instead of individuals. There is no chance what- ever of Parliament giving such powers to any General, and any General burdened with the necessity of obtaining quotable evidence, acting under the certainty of a nightly debate upon his conduct, and liable to hourly telegrams asking for explanation, would probably fail. Certainly he would accomplish nothing outside the range of his pickets, while he would leave behind him memories which, with a race like the Irish, whose imagination busies itself with the past and luxuriates in melancholy reminiscences, would never be effaced. We cannot recommence the struggle of centuries merely to levy rent. Failing martial law, Mr. Forster, a legalist by habit of mind, is certain to perceive that no resource for the suppression of crime is so certain or so effective as the steady and regular application of just law, law applied to the guilty only, so that the wickedest man has only to remain innocent to escape it, but applied steadily and, as far as punishment is concerned, successfully. Owing to the fact that the criminals themselves, or their sympathisers, are, or may be, jurymen, such steady application of the law is in Ireland temporarily impossible, and it is to make it possible that effort must, sooner or later, be directed. This can only be done either by setting up a Court of Cassation, and allowing an appeal to the Court whenever Judge and Jury differ on an agrarian case —an appeal granted every day in suits for damages, on the plea that justice has not been done—or by decreeing that agrarian cases must be tried before a Special Commission, invested with the exceptional right of interrogating the -accused. We ourselves should prefer the former plan, as interfering least with the ordinary Courts, and as encouraging juries to be honest, but either would work, and we would decide between them according to the opinion of the respectable Irish Members. Before such a Court or such a Commission, evidence would, we believe, be forthcoming, or would be supplied by the prisoners ; and if it were not so, we would have the State, having done its utmost, accept the situation. The State will not cease next week, but can wait

• for a century or two. If decent farmers, subjected to maiming and murder by their neighbours for paying just debts, sure of a just and efficient tribunal, and invited to state their wrongs, refuse to state them, the guilt and the suffering alike lie upon their own heads. We do not believe that they would remain quiescent, or perjure themselves when summoned ; but if they did, even the chance of a just trial before a just tribunal on a capital charge would deter "village ruffians" far more than an arrest under the Coercion Act. In the former -ease, though acquitted, the criminal would have been tried for his life, and would have escaped, as all his neighbours would know, only by perjury, possibly afterwards punishable ; while in the latter, he would be "the innocent victim of a tyrannical -Government," honoured by the country-side, and condemned, after all, to nothing but a few months of well-fed, well- 'warmed, and well-clothed seclusion.

But, then, the political prisoners ? Mr. Forster, as regarded them, did not think aloud, and if he left any impression, left the general one, that he would hold them detained. We would not. We would release them all on the expiration of the Act, and leave them, like other men, to the operation of the ordi- nary law at last made effective. We do not see that the leaders seized are worse than the leaders left at large, while their greater ability and decision increase, instead of decreas- ing, the facilities for dealing with them. If we are to fight, let the antagonist be Parnell, not Biggar. Of all men at the head of an insurrection, the least formidable is an able General, l3ecause you can foresee what he will do'; and the most formid- able is a mere incendiary, without the brains to formulate a policy or understand a plan. If the House of Commons cannot believe that, or if the Government holds that such a risk is beyond their prerogative to incur—and they may hold this, out of fear of their moral responsibility for bloodshed— then we would add to the Coercion Act a clause enabling any d,e'tenu who pleased to leave prison for any place outside these Islands, under penalty of ordinary conviction for prison- breaking, if he returned before the Act had expired. We would, in fact, if release is impossible, exchange de- tention for banishment. That, however, we recommend only as an alternative to be adopted if better may not be, holding that, under all circumstances, Governments which cannot die benefit more even than individuals, who can die, by doing simple justice. And it is justice that a man, whether accused of treason or of larceny, shall before punish- ment be tried and heard in his own defence. We do not deny that in extreme cases justice may be refused, as it often is refused in war ; but we doubt if the refusal ever perman- ently helped a regular Government, or an enduring cause.