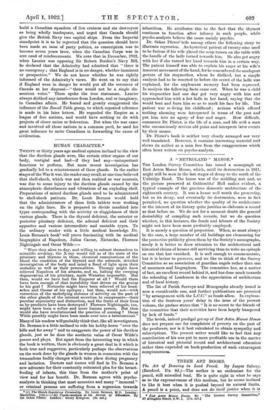 A " METROLAND " MANOR.* THE London Survey Committee has

issued a monograph on East Acton Manor House, which, until its destruction in 1911, might still be seen in the last stages of decay to the north of the Uxbridge Road. The house was of the middling sort and, as the picture preserved at Goldsmiths' Hall makes evident, a, typical example of the gracious domestic architecture of the eighteenth century. It was a house well worth the preserving, but as its decay, and eventually its destruction, were in fact permitted, we question whether the quality of its architecture or the interest of its history quite justifies so elaborate a record as that before us. We do not for a moment doubt the general desirability of compiling such records, but we do question whether, in this instance, the funds and labours of the Society might not have been more profitably employed.

It is merely a question of proportion. When, as must always be the case, a large number of old buildings are clamouring for the protective publicity given them by the Society's monographs,. surely it is better to draw attention to the architectural and historical claims of houses still surviving than to write an epitaph on one that has vanished. It is well enough to commemorate, but it is better to preserve, and we like to think of the Survey Committee as an association of guardian angels rather than one of mourners and biographers. The committee has, as a matter of fact, an excellent record behind it, and has done much towards the schooling of Londoners in the appreciation of architecture and of local history.

The list of Parish Surveys and Monographs already issued is now a considerable one, and further publications are promised " by arrangement with the L.C.C." as funds allow. In explana- tion of the fourteen years' delay in the issue of the present volume, the preface states that " It is no secret to the friends of the committee that their activities have been largely hampered by lack of funds."

The lavish, indeed prodigal get-up of East Acton Manor House does not prepare one for complaints of poverty on the part of the producers, nor is it best calculated to obtain sympathy and subscriptions. The present writer would like to feel that any- contribution of his was put to more profitable use in the matter of historical and pictorial record and architectural education' rather than expended on book-production of such extravagant sumptuousness.