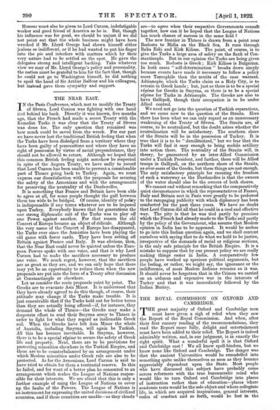 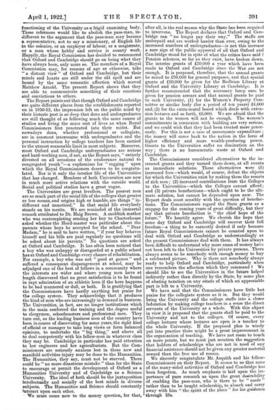 Page 6, 1 April 1922 — THE ROYAL COMMISSION ON OXFORD AND CAMBRIDGE.
Close

THE ROYAL COMMISSION ON OXFORD AND CAMBRIDGE.

T"great majority of Oxford and Cambridge men must have given a sigh of relief when they saw the Report of the Royal Commission. And when, after their first cursory reading of the recommendations, they read the Report more fully, delight and entertainment must have been added to their relief. The Report is indeed admirably written, and, in our judgment, is in exactly the right spirit. What a wonderful spell it is that Oxford and Cambridge cast 1 We all know spell-binders, but we know none like Oxford and Cambridge. The danger was that the ancient Universities would be remodelled into something quite unlike themselves as soon as they became appreciably dependent upon the State. Most people who have discussed this subject have probably come across reformers with the true bureaucratic mind who would like to turn Oxford and Cambridge into places of instruction rather than of education—places where academic tests would be the sole objectand -where collegiate life,, in, which are acquired inspirations, general interests, toads of conduct and so forth, would be lost in - the functioning of the University as a frigid examining body. These reformers would like to abolish the pass-man, in- different to the argument that the pass-man may become a representative, not to say a missionary, of English life in the colonies, or an employer of labour, or a magistrate, or a • man whose hobby and service is county work. Happily, the Royal Commission has decided to recommend that Oxford and Cambridge should go on being what they have always been, only more so. The members of a Royal Commission may, for reasons of age or otherwise, take "a distant view " of Oxford and Cambridge, but their minds and hearts are still under the old spell and are hound by the same 'romantic affection which moved Matthew Arnold. The present Report shows that they are able to communicate something of their emotions and convictions to others.

The Report points out that though Oxford and Cambridge are quite different places from the establishments reported on in 1850-52, the impression left on the public mind by their historic past is so deep that dons and undergraduates are still thought of as following much the same course of studies and living the same sort of lives as when Royal Commissioners first penetrated into their midst. But nowadays dons, whether professional or collegiate, are in constant intercourse with undergraduates and the personal instruction by college teachers has been carried to the utmost reasonable limit in most subjects. Moreover, most Oxford and Cambridge undergraduates are serious and hard-working men, if not, as the Report says, " entirely divested on all occasions of the exuberance natural to congregated youth "—a euphemism for " ragging " upon which the Royal Commissioners deserve to be congratu- lated. Nor is it only the interior life of the Universities that has changed. Members of both Universities are now in much more active relations with the outside world. Social and political studies have a great vogue.

The Universities are great levellers. The poorest men are so much part of the social life of the colleges that greater or less means, and origins high or humble, are things " in- different and unnoticed." In that social life everybody stands on his merits. We are reminded of the immortal remark attributed to Dr. Haig Brown. A snobbish mother who was contemplating sending her boy to Charterhouse asked whether the Head-master was particular about the parents whose boys he accepted for the school. " Dear Madam," he is said to have written, " if your boy behaves himself and his bills are paid regularly no questions will be asked about his parents?' No questions are asked at Oxford and Cambridge. It has often been noticed that a boy who was unhappy or disregarded at a public school has at Oxford and Cambridge every chance of rehabilitation. For example, a boy who was not " good at games " and suffered a consequent disparagement at school, may be adjudged one of the best of fellows in a community where the interests are wider and where young men have at length discovered that no great satisfaction is to be found in rapt admiration of an athletic hero if the hero happens to be bad mannered or dull, or both. It is gratifying that the Commissioners have hardly anything but praise for the college system. They acknowledge that it produces the kind of men who are increasingly in demand in business. The Universities, in fact, are no longer institutions which in the main conferred the training and the degree useful to clergymen, schoolmasters and professional men. They turn out, as the leading business men of the country have been in course of discovering for some years, the right kind of official or manager to take long views or form balanced opinions, to undertake the " big thing," and above all to deal competently with his fellow-men in whatever class they may be. Cambridge in particular has paid attention to her engineers and her agriculturists. But the Com- missioners are seriously anxious lest in these new and manifold activities injury may be done to the Humanities. The Humanities, they say, must not be starved. There could be " no more disastrous mistake " than for the State to encourage or permit the development of Oxford as a Humanities University and of Cambridge as a Science University. The ideal of both should be the juxtaposition intellectually and socially of the best minds in diverse subjects. The Humanities and Science should constantly interact upon each other. - We must come now to the money question, for that, after all, is the real reason why the State has been required to intervene. The Report declares that Oxford and Cam- bridge can " no longer pay their way." The staffs are underpaid and are worked harder than ever, owing to the increased numbers of undergraduates--is not this increase a sure sign of the public approval of all that Oxford and Cambridge stand for in spite of what the critics have said ? Pension schemes, so far as they exist, have broken down. The interim grants of £30,000 a year which have been made to Oxford and Cambridge since the War are not enough. It is proposed, therefore, that the annual grants be raised to £20,000 for general purposes, and that special grants of £10,000 be given for the Bodleian library at Oxford and the University Library at Cambridge. It is further recommended that the necessary lump sum be given for pension arrears and that annual grants be paid to each University, (1) for the Women's Property Com- mittee or similar body (for a period of ten years) £4,000 and, (2) for the extra-mural board which deals with exten- sion lectures and so forth, £6,000. We are afraid that the grants to the women will not be enough. The women's commitments in connexion with building are very serious, and we could wish that they had been treated more gener- ously. For this is not a case of uneconomic expenditure ; the money will come back to the nation in the form of higher efficiency and more wealth-producing power. Grants to the Universities suffer no diminution on the way ; there is no bureaucratic waste at Oxford and Cambridge.

The Commissioners considered alternatives to the in- creased grants and they turned them down, at all events as immediate solutions. These alternatives were (1) increased fees—which would, of course, defeat the objects for which the Universities exist by making them the resorts of rich men ; (2) increased contributions from the Colleges to the Universities—which the Colleges cannot afford ; and (3) private benefactions—which ought to be the ulti- mate solution, but cannot be depended upon now. The Report deals most sensibly with the question of benefac- tions. The Commissioners regard the State grants as a stopgap for the coming years of great difficulty, but they say that private benefaction is " the chief hope of the future." We heartily agree. We cherish the hope that some day Oxford and Cambridge will recover their full freedom—a thing to be earnestly desired if only because future Royal Commissioners cannot be counted upon to deal with Oxford and Cambridge so understandingly as the present Commissioners deal with them. It has always been difficult to understand why more sums of money have not been left to the Universities by private persons. There always seems to be somebody with enough money to buy a celebrated picture. Why is there not somebody always ready to help Oxford and Cambridge, particularly when one remembers the affection which they command I We should like to see the Universities in the future helped indirectly rather than directly by the State, by some plan of abating taxation on any estate of which an appreciable part is left to a University. We have said that the Commissioners have little but praise for the collegiate system as it is. But they would bring the University and the college staffs into a closer federation by making college teachers in a sense the direct servants of the University as a whole. With this object in view it is proposed that the grants shall be paid to the University and not to the colleges. Of course, every college lecturer whose lectures are open is a teacher to the whole University. If the proposed plan is wisely put into practice there might be a great improvement in the organization of teaching. We have not room to touch on more points, but we must just mention the suggestion that holders of scholarships who are not in need of any financial assistance should not be given any greater material reward than the free use of rooms.

We sincerely congratulate Mr. Asquith and his fellow- Commissioners on their Report. It seems to us that none of the many-sided activities of Oxford and Cambridge has been forgotten. As much emphasis is laid upon the im- portance of pure research as upon the great desirability of enabling the pass-man, who is there to be " made " rather than to be taught scholarship, to absorb and carry away with him " the spirit of the place " for his guidance through life.