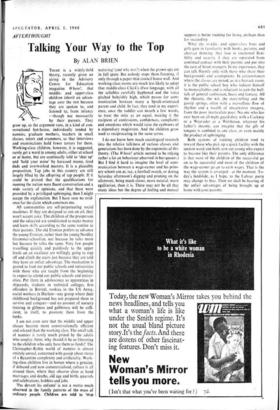 Talking Your Way to the Top

THERE is a widely-held theory, recently given an airing in the Advisory Centre for Education magazine Where?, that middle- and upper-class children inherit an advan- tage over the rest because they are spoken to, and listened to, from infancy —though not necessarily by their parents. They grow up, so the argument runs, in a kind of con- versational hot-house, individually tended by nannies, graduate mothers, teachers in small classes, tutors and crammers, so that interviews and examinations hold fewer terrors for them. Working-class children, however, it is suggested, rarely get a word in among adults, either at school or at home, but are continually told to 'shut up' and 'hold your noise' by harassed mums, tired dads and overworked masters. It is a plausible proposition. Top jobs in this country are still largely filled by the offspring of top people. If it could be proved that the qualifications for running the nation were fluent conversation and a wide variety of opinions, and that these were provided by a privileged upbringing, then I might accept the explanation. But I have seen no evid- ence for the claim which convinces me.

All communities are self-perpetuating social machines. If they are designed to run on oil, they won't accept coke. The children of the prosperous and the educated are conditioned to make money and learn skills according to the same routine as their parents. The old Etonian prefers to advance the young Etonian, rather than the young Nerdley Grammar-schoolian, not, because he talks more but because he talks the same. Very few people travelling quickly and painlessly to the upper levels on an escalator are willingly going to step off and climb the stairs just because they are told they have an unfair advantage. The mechanism is geared to feed our public schools and universities with those who are taught from the beginning to expect to attend our public schools and univer- sities. Put them in adolescence as apprentices in shipyards, students in technical colleges, first offenders in Borstal, rookies in the US Army, social workers in Harlem—any group where their childhood background has not prepared them to survive and conquer—and no amount of nursery training in glibness and gabbiness will be suffi- cient, in itself, to promote them from the ranks.

I am not even sure that the middle and upper classes become more conversationally efficient and relaxed than the working class. The small talk of nannies is rarely much prized by the adults who employ them; why should it be so liberating to the children who only have them as feeds? The Christopher-Robin world of nannies is almost entirely unreal, concerned with gossip about status of a Byzantine complexity and artificiality. Work- ing-class children live in homes where a genuine, if debased and now commercialised, culture is all around them, where they observe close at hand marriages and deaths, old age and birth, quarrels and celebrations, hobbies and jobs.

`Pas devant les enfants' is not a motto much observed in the family patterns of the mass of ordinary people. Children are told to 'stop nattering' (and why not?) when the grown-ups are in full spate. But nobody stops them listening, if only through a paper-thin council house wall. And working-class mums are much less likely to adopt that middle-class Chick's Own language, with all the syllables carefully hyphened and the voice pitched babyishly high, which passes for com- munication between many a Spock-orientated parent and child. In fact, they tend in my experi- ence, once the toddler can mouth a few words, to treat the mite as an equal, making it the recipient of confessions, confidences, complaints and anecdotes which would raise the eyebrows of a stipendiary magistrate. And the children grow used to reciprocating in the same terms.

I do not know how much sociological research into the relative talkiness of various classes and generations has been done by the exponents of this theory. (The Where? article seemed to be relying rather a lot on behaviour observed in bus queues.) But I find it hard to imagine the level of com- munication between a wage-earner and his prim- ary school son at, say, a football match, or during Saturday afternoon's digging and pruning on the allotment, being much closer, more natural, more egalitarian, than it is. There may not be all that many ideas but the degree of feeling and mutual support is better training for living, perhaps than for succeeding.

What the middle- and upper-class boys and girls gain in familiarity with books, pictures, and abstract thinking, they lose in emotional flexi- bility and security if they are separated from continual contact with their parents and put into the care of hired strangers. In my experience, they can talk fluently only with those who share their backgrounds and assumptions. In circumstances where the classes are mixed, as in a barrack room, it is the public school boy who reduces himself to monosyllables and is reluctant to join the bull- talk of general confession, boast and fantasy. All the rhetoric, the wit, the story-telling and the gossip springs, often with a marvellous flow of rhythm and a wealth of imaginative imagery, from the poor inarticulate poor. No one who has ever been on all-night guard duty with a Cockney or a Wearsider or a Welshman, whatever his father's income, can imagine that the gift of tongues is confined to one class, or even mainly the product of upbringing.

Both systems of training children tend to reward those who pick up a quick facility with the spoken word and both turn out young who expect to become like their parents. The only difference is that most of the children of the successful go on to be successful and most of the children of the wage-earner go on to earn wages. That is the way the system is arranged —at the moment. To- day's landslide, as I hope, to the Labour party may change its bias. Then we shall be hearing of the unfair advantages of being brought up at home with your parents.