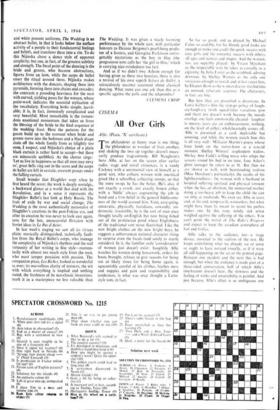 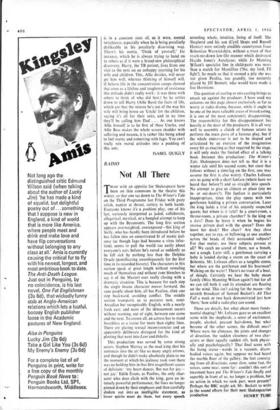 HE philanderer as funny man is one thing, I the philanderer as wrecker of lives another, and shaking the two up together doesn't neces- sarily produce tragi-comedy. Bill Naughton's hero Alfie, at last on the screen after earlier radio, stage and novel existences, is a randy Cockney with a sentimental view of himself as a good sort, who collects women with uncritical greed like a schoolboy collecting stamps, so that the more swops he has the better. He's also, if not exactly a crook, not exactly honest either, with a 'fiddle' always augmenting the job in hand and a Um belief in the general fiddlesome- ness of the world around him. Vain, easy-going, autocratic, physically fastidious, cowardly, un- domestic, irresistible, he is the sort of man once thought totally un-English but now being fished out of the proletarian pond where Englishness of the traditional sort never flourished. Like the new bright clothes on the new bright boys, he suggests a subterranean national character rising to surprise even the locals (and surely to startle outsiders). In it, the familiar male 'consideration' of women just doesn't exist: haughtily Alfie watches his women doing housework, orders his boots brought, refuses to give reasons for being out or likely times for being home again, is squeamishly careful of his clothes, loathes mess and nappies and pain and responsibility and tenderness; is what was once thought a Latin- style tom, in fact.

So far so good, and as played by Michael Caine so credible, for his blonde good looks are enough to make one credit the quick success with easy girls and the romantic success with others, all ages and natures and shapes. And the women, too, are superbly played: by Vivien Merchant as the respectable %%ire he takes as casually as a cigarette. by Julia Foster as the scrubbed, adoring doormat, by Shelley Winters as the only one voracious enough to match and at last reject him, by Eleanor Bron as the woman doctor startled into an amused, reluctant response. the characters, in fact, arc line.

But how they are presented is disastrous. In Lewis Gilbert's film the stop-go policy of laugh- cry-laugh-cry (with squeal-titter variations now and then) just doesn't work because the moods overlap. one feels emotionally cheated-laughter is uneasy, tears arc an embarrassment, nothing, on the level of either, wholeheartedly comes off. Attie is presented as a card, deplorable but amusing, and while the women match hint this is all very well : Millicent Martin's popsy whose knee lands on the motor-horn at a crucial moment, Shelley Winters' resplendent widow, Shirley Ann Field's willing nurse who whips the screens round his bed in no time. Jane Asher's glum teenager he refers to as it." But then we are shown as well, with heartrending realism (Miss Merchant's particularly), the results of his lightheartedness: the woman with a husband in hospital suffering spiritual and physical torment when she has an abortion, the unmarried mother doing a too-heavy job to keep the child she can see only at weekends. We even see Alfie in tears and, at the end, temporarily womanless: but what might have been (is meant to seem) his pathos makes one, by this time, mildly sick when weighed against the suffering of the others. You can't point the moral of The Rake's Progress and expect to keep the arcadian atmosphere of fun and frolics.

Alfie talks to the audience, too-a stagy device, unsuited to the realism of the rest. He keeps underlining what we already see or sense oc ought to have noticed visually, as if it were all still happening on the air or the printed page. Between one incident and the next this is bad enough, but when the audience is made part of a three-sided conversation, half of which Alfie's interlocutor doesn't hear, the slowness and the feeling of winks and unsuitability is painful. And just because Altie's effect is so ambiguous one is in a constant state of, as it were, mental twitchiness, especially when he is being peculiarly dislikeable in his peculiarly disarming way. There's his motto, `Think of yourself,' for instance, which he is always trying to hand on to others as if it were a brand-new philosophical discovery. Harry, the TB patient, lives from one visit to the next on an unhappy yearning for his wife and children. This, Alfie decides, will never get him well, whereas thinking of himself will. (I believe life in the concentration camps showed that even as a lifeline and toughener of resistance this attitude didn't really work : it was those with others td think of who did best.) So he settles down to tell Harry (Alfie Bass) the facts of life, which are that the minute he's out of the way his wife will bring home an 'Uncle' for the children, saying it's all for their sake, and in no time they'll be calling him Dad . . . As one knows Alfie himself is to be first of these Uncles, and Alfie Bass makes the whole screen shudder with suffering and nausea, it is rather like being asked to feel matey and conniving with Iago. You can't really mix moral attitudes into a pudding of this sort.