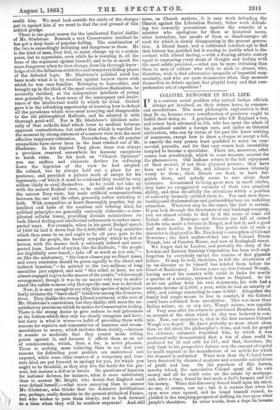 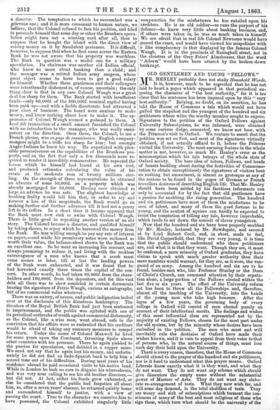 IT is a curious social problem why retired Indian officials always get involved, on their return home, in commer- cial speculations. 'The most philosophic explanation is that they do so, because every consideration of prudence ought to forbid their doing so. A gentleman who left England a boy, and comes back advanced in life, who has spent the whole of his manhood amidst a foreign race, and under an Oriental civilization, who can by virtue of his past life know nothing of commerce, except how to draw a cheque or accept a bill, is exactly the very person least qualified to enter on com- mercial pursuits, and for that very reason feels irresistibly tempted to become a speculator. There are, moreover, other causes less paradoxical, which in some measure account for the phenomenon. Old Indians return in the full enjoyment of their mental, if not their physical powers ; they have been used to a busy life, and idleness becomes intensely weary to them ; their friends are dead, or have for- gotten them, and nobody seems to care about their existence. Accustomed to being great men in small circles, they have an exaggerated estimate of their own practical ability, and miss dreadfully the attentions which a position of authority formerly entitled them to. For such men direc- torships and chairmanships and partnerships have an unfailing attraction. Whatever may be the cause, the fact is certain. If you look through the directorate of any bankrupt company, you are almost certain to find in it the name of some old Indian officer. Boulogne and Brussels are full of ruined Nabobs who made a fortune in Bengal, and lost it, and a good deal more besides, in London. The poetic side of such a character is displayed in Mr. Thackoray's conception of Colonel Newcome ; the hard matter-of-fact one in Colonel Petrie Waugh, late of Camden House, and now of Basinghall street.

We forget fast in London, and probably the story of the London and Eastern Banking Corporation has been well-nigh forgotten by everybody except the victims of that gigantie failure. It may be well, therefore, to tell the adventures of its ex-director as he himself has related them before the Court of Bankruptcy. Eleven years ago this Colonel Waugh, having served his country with credit in India for nearly a quarter of a century, returned home to England. As far as we can gather from his own statements, his wife had a separate income of 2,000/. a year, while he had an annuity of 4001., and savings amounting to some 8,0001. Altogether the family had ample means to live in comfort, if the Colonel could have refrained from speculation. This was more than Indian nature, or, at any rate, Waugh nature, was capable of. Very soon after his return he purchased Branksea Island, on account of the alum which its clay was believed to con- tain. Now, our suspicion is, that in the first instance Colonel Waugh was duped. He knew probably no more about alum than he did about the philosopher's stone, and took for gospel the elaborate estimates furnished him, by which it was mathematically demonstrated that a ton of alum could be produced for 3/. and sold for 11/., and that, therefore, the only limit to his prospective fortune was the amount of capital he could expend on the manufacture of an article for which the demand is unlimited. Wiser men than the Colonel have been deceived by chemical analyses and scientific calculations of profit and loss. On the purchase of this barren, marshy island, the speculative Colonel spent all his own money and all he could raise on the estate by mortgage. and, after a time, found he had made a fool's bargain and lost his money. When this discovery forced itself upon his mind, no one, of course, can say ; but it is certain that when his eyes were once opened, and he found himself ruined, he yielded to the tempting prospect of shifting his loss upon other people's shoulders. In other words, from a dupe he became a director. The temptation to which he succumbed was a grievous one; and it is more consonant to human nature, we believe, that the Colonel refused to face his position, and tried to persuade himself that some day or other the Branksea specu- lation might turn out a 'winning card after all, than to suppose that he bought the island with the direct view of raising money on it by fraudulent pretences. It is difficult, however, to suppose that when he first came across the Eastern Bank he was not aware that his property was worthless. The Bank in question was a model one for a military speculation. Its chairman was another old Indian official, who knew no more about banking than a child ; and the manager was a retired Indian army surgeon, whose great object seems to have been to get a good salary for himself. Whether these gentlemen and their colleagues were intentionally dishonest is, of course, uncertain ; the only thing clear is that in any case Colonel Waugh was a great deal too sharp for them. The Bank started with insufficient funds—only 80,000/. of the 500,000/. nominal capital having been paid up—and with a feeble directorate had attracted a poor class of business. The board were anxious to make money, and knew nothing about how to make it. The ap- pearance of Colonel Waugh seemed a godsend to them. A bond fide transaction of a small amount furnished the Colonel with an introduction to the manager, who was really omni- potent on the direction. Once there, the Colonel, to use a French phrase, was en pays de connaissance. English company- mongers might be a trifle too sharp for him ; but amongst Anglo-Indians he knew his way. Ile expatiated with plau- sible persuasiveness on the capabilities of the Branksea pro- perty, and on the fact that only a few thousands were re- quired to render it incredibly remunerative. He repeated the lesson which he himself had learnt at his own cost, and produced estimates calculating the value of his estate at the moderate sum of twenty millions ster- ling. On the strength of these representations he obtained an advance of some 50,000/. on a property which was already mortgaged for 30,000/. Having once obtained so large an advance he was safe. The slightest knowledge of banking frailty would tell him that, in order to try and recover a loss of this magnitude, the Bank would go on making further and further advances till it had not a penny left in its coffers. In a short time it became apparent that the Bank must now sink or swim with Colonel Waugh. There is little good in repeating another version of an old story. The Colonel became a director, and qualified himself by taking shares, to repay which he borrowed the money from the Bank. He was willing enough to pay any rate of interest on paper,—and while his promissory notes were reckoned as worth their value, the balance-sheet shown by the Bank was an excellent one. So he went on increasing his account, and always promising to reduce it, and living with the reckless extravagance of a man who knows that a crash must come sooner or later, till at last the lending powers of the Bank were exhausted, and it was found that he had borrowed exactly three times the capital of the con- cern. In other words, he had taken 80,000/. from the share- holders and 160,000/. from the depositors, and for this vast debt all there was to show consisted in certain documents bearing the signature of Petrie Waugh, curious as autographs, but of no commercial value whatever.

There was an outcry, of course, and public indignation boiled over at the disclosure of this disastrous bankruptcy. The direotors of the Royal British Bank had just been sentenced to imprisonment, and the public was agitated with one of its periodical outbreaks of wrath against commercial dishonesty, so the Colonel, like a wise man, went abroad, safe in the conviction that his affairs were so embroiled that his creditors would be afraid of taking any summary measures to compel his return. Under the name of Colonel Maxwell he lived for some years upon the Continent, favouring Spain above other countries with his presence. There he again yielded to the passion for speculation, and dabbled in a copper mine. We need not say that he again lost his money, and unfortu- nately he did not find an Indo-Spanish bank to help him a second time out of his difficulties. During most years of his residence abroad he paid occasional visits to his native land. While in London he took no care to disguise his whereabouts, and was very near calling to see his old brother directors,— but did not. At last, either his funds grew exhausted, or else he considered that the public had forgotten all about him, so, after a seven years' absence, he returned quietly home and surrendered himself to justice, with a view of passing the court. True to the character we conceive him to have possessed, the Colonel exhibited singularly little compunction for the misfortunes he has entailed upon his creditors. He is an old soldier—so runs the purport of his defence—he knew very little about banking business, and, if others were taken in, he was as much taken in himself. We are afraid that in real life Colonel Newoome would have passed the court, and would have viewed his mispolicies with a like complacency to that displayed by the famous Colonel Waugh. It is in the precincts of Basinghall street, not in the cloisters of the Grey Friars' Almshouses, that the word " Adsum" would have been uttered by the broken-down bankrupt.