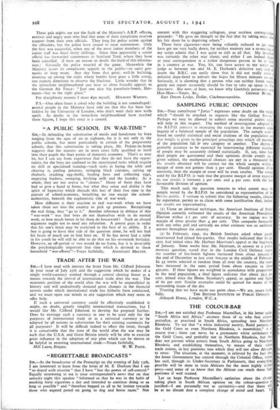 " A PUBLIC SCHOOL IN WAR-TIME "

SIR,—In defending the substitution of maids and handymen by boys ranging from the ages of six to eighteen, for it is not only in the public schools, but more particularly in certain of the preparatory schools, that this substitution is taking place, Mr. Pedant-in-Arms suggests that the masters are in most cases fully qualified to instil into their pupils the finer points of domestic economy. That's as may be, but I can say from experience that they do not have the oppor- tunity, for the boys are confined to the stereotyped tasks which require no skill or specialised training—such tasks as laying the table and clearing it, peeling potatoes, stringing black currants, cutting up rhubarb, crushing egg-shells, feeding hens and collecting eggs, emptying buckets, sweeping, fetching milk and the laundry. As a whole, they are not averse to " chores." Many of them may have had to give a hand at home, but what they sense and dislike is the spirit of hypocrisy which shrouds this loss of their free time in the pursuit of school-economy, benefiting no one except the school- authorities, beneath the euphemistic title of war -work.

How different is their reaction to real war-work when we have taken them out into the country to pick up potatoes. Recognising the real thing, they " go to it." Another inference in defence of this " war-work " was that boys do not themselves wish to do mental work, so how much better to let them do housework! Such an absurd argument ought not to need any refutation. A parent pays in order that his son's brain may be exercised to the best of its ability. If a boy is going to leave that side of the question alone, he will not find his brain of much use to him later on. If he has never laid a table in his youth he will still be able to do that on his seventieth birthday. However, an off-period or two would do no harm, but it is invariably the psychologically important free time which is devoted to these